Pearly - Ragdoll of the Week 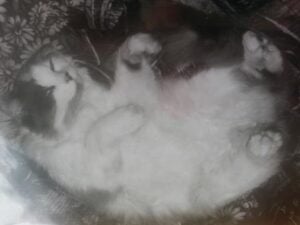 This is my beautiful Ragdoll girl, Pearly, and here is her story.

On a sunny day in October of 2001, my sons and I were in a pet store looking at the animals in the corner of the store that was dedicated to SPCA adoptions. I had no intention of getting a cat that day as we already had two dogs. Little did I know that I was about to be smitten by a big, hairy, lovable kitty. 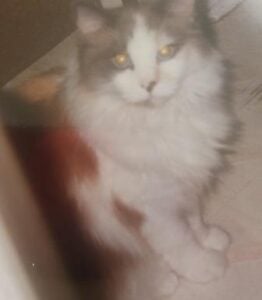 As my oldest son leaned over to peer into Pearly's cage, she walked determinedly from the back of the cage, her gaze never leaving his, and reached a fuzzy paw through the bars and flipped his glasses up. We all gathered around her cage as she spoke to us in quiet mews and looked us each in the eye. We fell in love with her right then, I mean, how could we not?

She was seven years old at that time, and had, unbelievably, been in the SPCA for quite some time. This was her last trip to the pet store's adoption corner, and if she wasn't adopted she would have been taken back to the shelter and euthanized. When I expressed my shock that such a beautiful cat had not been adopted yet, the attendant said that it was probably because of her age. "People want kittens", she said, "And this cat is beautiful, but she's getting up there in years." I had no idea at the time how long a cat lives, but I knew that Pearly was worth saving. She had looks and personality all day long. As we were at the checkout with our new girl, plus all the supplies she was going to need, the staff gathered around to say goodbye to her. They were all in love with Pearly and had been hoping that someone would adopt her.

When we got her home she settled in immediately. She didn't waste any time at all showing the dogs that there was a new sheriff in town. She was unlike any cat I had ever had. First of all there was her size. When we brought her home she was 21 pounds! Then there was her adorable and intelligent personality. Whenever we had company she would sit right next to the guest, staring at them and putting a gentle paw on their arm, or face, if they refused to acknowledge her. She would do the same thing to me and the kids if she decided she wanted some attention, which was often! We would feel a gentle paw on our arm and turn to see her gazing lovingly into our eyes. She woke me up in the morning the same way, with a paw held on my face until I stirred. 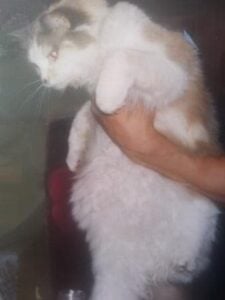 She loved to meet new people. There were many times I would have friends over for coffee and Pearly would be right there, sitting on her own chair and occasionally meowing when she had a point to make about the discussion we were having.

She loved to play fetch too, although with Pearly it wasn't exactly 'fetch', it was more like, grab whatever toy I threw and carry it off to parts unknown. She loved to be where my boys were too, introducing herself to their friends, making herself available for gentle pats and belly rubs. She was definitely a people cat. 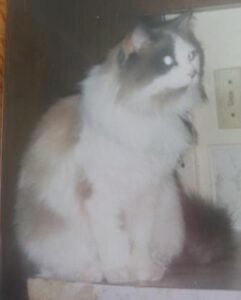 The years passed, as did both of our dogs, eventually the kids moved out, and it was just me and Pearly, alone in the house. She would follow me from room to room when I was home, even following me into the bathroom. When I came home from work she was always there, waiting at the door, and would greet me with a gentle mew. She loved nothing more in her later years than sitting on my lap, watching TV and getting her hair brushed.

More years passed. The day she wasn't at the door when I came home from work, I knew that her age was catching up to her. A trip to the vet told me that she was in renal failure, due to her advanced age. One year of special kidney food, and sub Q injections helped her to have a quality of life that she otherwise would not have had.

In spite of all my efforts there came a day when no measure I took to save her was enough. I held her and sobbed my heart out as I realized that there was nothing more I could for her. She would languish on the couch for hours, sometimes not even lifting her head when someone new entered the room.

On November 23, 2014 my sweet Pearl passed away at the age of 20. I still miss her and will for a long time. She was such a joy. She gave me a love of the breed and I will be picking up my new Ragdoll kitten in January! Thank you to Pearly for introducing me to her special breed, and teaching me that an older cat is so worth welcoming into your home. 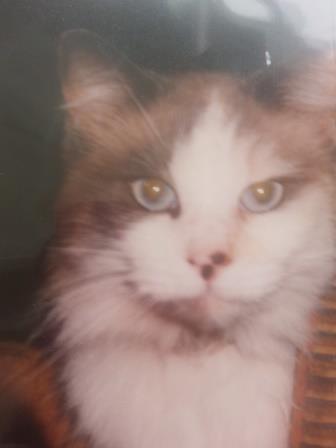 Miss you my Pearly Girly. 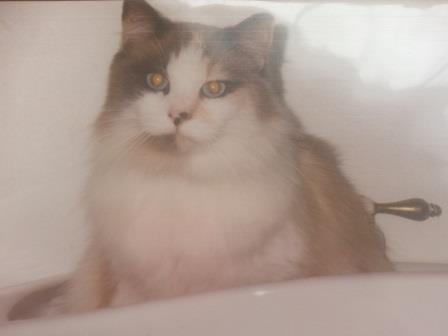