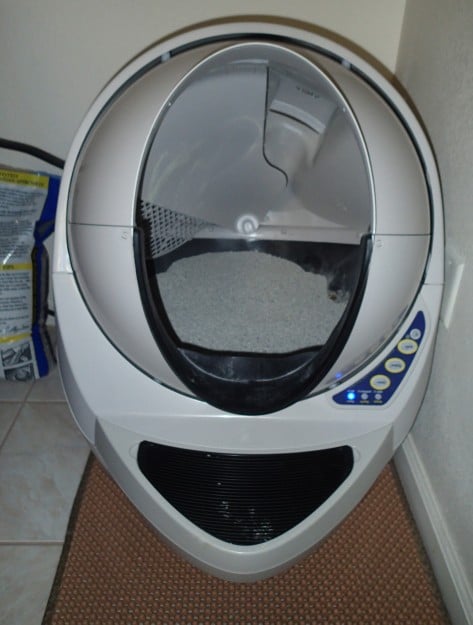 Last week I sent out our Newsletter, asking for reader's experiences with automatic litter boxes (Click here to sign up for our Newsletter).  Jessica ended up writing me a pretty lengthy response that I thought needed to be shared.  Of course, I asked her permission and she sent some photos to share as well.  We are getting a Litter Robot Open Air to review in the next few weeks and there is going to be a giveaway extravaganza for it in December as well, so figured I would introduce it here.  From the photos it looks like Jessica uses Dr. Elsey's Precious Cat Ultra Cat Litter and also has a Blackhole Cat Litter Mat.  Thank you, Jessica - for letting me share!

Update! July 12, 2016 - I check in with Jessica about how it continues to perform: Litter Robot Open Air Reader Review Update: Malfunctions and Globe Replacement

Hi Jenny!I just saw your newsletter and yes, my kitties are using an automated litter box, the Litter Robot Open Air.  My two kitties are Saoirse (Seer-sha, seal color point) and Aisling (ASH-ling,  blue color point).My kitties are still pretty new - I brought them home October 3rd and they are still kittens (4 mos old). I brought home the litter robot when I had them for 2 weeks. I decided to get the Open Air because it's the newest model and seems to have several design improvements such as a larger opening, more setting options and a full drawer indicator. I could also buy at Bed Bath and Beyond and use a 20% off coupon and free shipping, which made a big difference in price.I actually thought of you when unboxing it, I've watching so many of your arrival and review videos! It's beautifully packaged and really well made and very very easy to set up - even the first liner was already installed!The kittens adapted immediately. Per LR setup advice, I used some of their existing litter and left it turned off for the first week or so until (manually turning it on to scoop) until it was clear they were using without issue. From then on - it's been their sole box, no issue! I did put a cord protector from the hardware store around the cord, my kitties are in chewing mode (thank you Jenny for "Bringing Home Your Ragdoll Kitten" advice!). 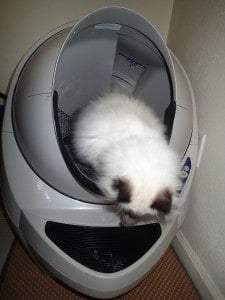 Theoretically the unit will still work fine for my kitties when they are older/larger - we'll see! I did a lot of reading before I decided to buy and there are a lot of user reviews for multi cat households and owners of larger cats who have used the previous model (Litter Robot II) for years with good result.The Good: I decided to get an automatic litter box for two primary reasons: 1) to cut down on litter box smell (though I am a multi times a day scooper, there was still some kitty box smell and my house isn't large) and 2) I am gone at least one night a month, and I liked the idea of having a clean box ready even if I was gone for 24 hours. High marks for both so far - as soon as the Litter Robot scoops, there is zero smell and really I only get smell if they have stinky poop. It completely contains litter box smells.Additional bonuses since using it: Always clean box has been a benefit, and it's actually really nice to take stinky litter out 1-2x a week vs daily. While it wasn't a big deal to scoop the box, this is an improvement.Other stuff: 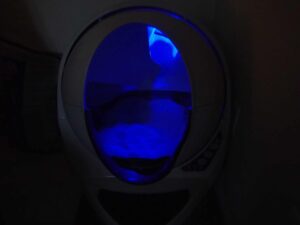 It also has a interior blue light when it's dark, and I like this feature, but I can't say for sure how much my cats need it/like it.I have it setup in my bedroom and with a litter catching mat. Compared to the regular (large) litter box they were using for the first few weeks, having a single entry/exit point has cut down but has not eliminated tracked litter. Part of that is my kitties tend to jump from the Litter Robot onto the litter mat after using, not sure if that behavior will decrease as their size increases (both are just at the minimum 5 lb size now).It has an 8 hour sleep function but personally, the noise isn't that bad (to me) vs the smell if the kitty poops in middle of the night, so I don't use this feature. Is it noisy? Well, it makes noise. It's less noise than kitchen appliances. I sleep through it, my daughter has slept through it. Might be an issue for a light sleeper though.The Not So Good at the moment: 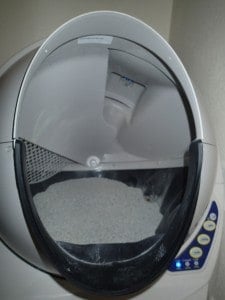 I have one issue which I actually just sent to support to ask about. The Open Air has a rubbery globe liner as the bottom of the box. My kitties have already adopted a habit of scratching at the opening of the globe which unseats the Globe Liner. The liner is securely fastened all the way around on the interior, but is just shaped to go over the opening - and my cats unseat it regularly. This doesn't make the unit unusable at all, the internal liner is securely attached - but obviously you want the liner in place all around.I contacted support and they responded almost immediately and let me know they have a rigid piece that will be included going forward. I bought the Litter Robot Air during their soft launch, it's still "beta"- they haven't had their official launch yet. The Litter Robot has an 18 month warranty, so if I needed to replace the liner in the interim it would be covered. Apparently this behavior is much more common than they ever guessed!In terms of price/long term savings, I don't think I can in any way try to claim it will "save me money" in the long term - even if I replaced a conventional litter box regularly and with whatever actual litter usage I'd save, I highly doubt it evens out, or if it does it would take many years. Does it use less litter? Yes, somewhat. I don't have to add much litter and not more than once a week to keep the level, I probably added slightly more often with a regular box. But we're not talking a vast difference. But I really like the functionality and especially love the smell control. Most importantly, my kitties seem happy. And that's what's always most important!Let me know if I can answer any questions etc! 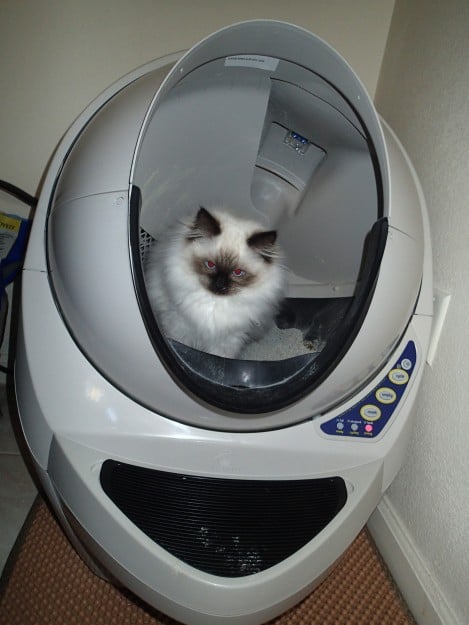 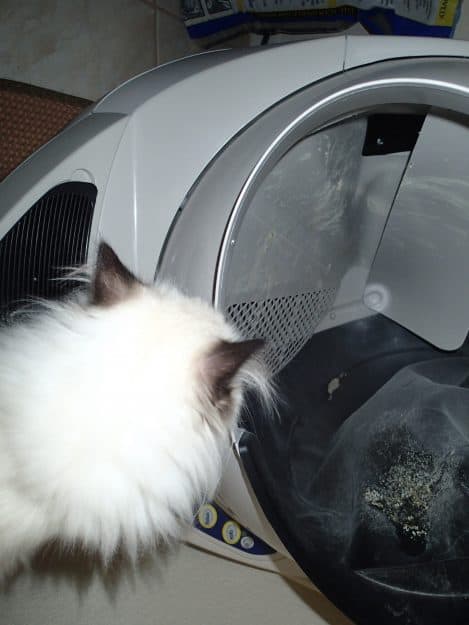