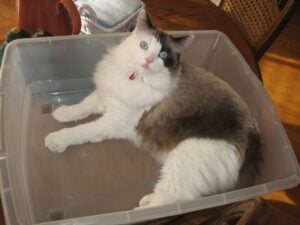 This is a story about Sneakers, our seal bi-colored Ragdoll kitty with face markings like the mask in Phantom of the Opera.

It seems that from the time our kids were little we always had animals - from an array of hamsters, fish, birds, puppies and, finally, kitties. It seems the cats always lasted the longest.

Sometime during our daughter's senior year of high school we lost our beloved Tosha and Nicholas, a pair of silver chinchilla Persians--he with that nasty urinary blockage problem and she after she swallowed a piece of cording I had on the floor. After that we decided no more pets. So the kids moved on with their lives, each graduating, marrying and establishing their own families. 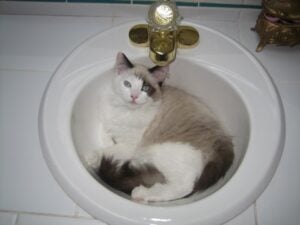 Sneakers as a kitten in a sink

Feeling that empty nest syndrome, I began longing for another kitty. I went to cat show after cat show but in the Northwest there doesn't seem to be a lot of Ragdoll breeders. My cousin, Pat, has always had Ragdolls and loves the breed...they are so docile, sweet and loving. I really wanted a "lap cat" so I began combing the internet, looking for a breeder in our area within driving range. I found several but ended up driving to Auburn, Washington, one day with my daughter, taking a borrowed kitty carrier "just in case". Greeting us at the door were 3 of the cutest kitty faces you ever saw and I was smitten. Two of them were adorable, of course, but one had a little black spot on his back paw and whitish pink tips on his ears which made him unique. So, of course, we scooped him up and drove him the 100 miles back home. He romped in between our pillows on our bed and scampered around the house making himself right at home. I think cats do that, don't they? Or is he special just because I think he is? 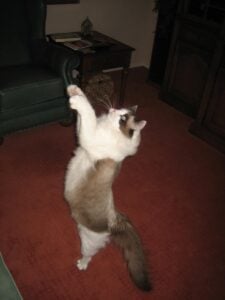 He has grown from a 2.5 pound kitten into an almost 16-pound big boy. Even my husband, who could either take animals or leave them, has gotten attached to him and loves him almost as much as I do. He isn't the sweet, docile, loving kitty I was hoping for...but he has tons of personality. He gets that "streak of energy", from lying on top of the coffee table, taking a dead run down the hall, back up the hall, around the couch, hopping over my husband's footstool and sliding back across the coffee table, and stopping just in time before he falls off on the other side. Then he goes back to sleep. Amazing muscle control! 🙂

I love the way he lays on his back with his paws curled up like all Ragdolls do, I guess. I rub his tummy until he gives me a little nip telling me that's enough. He will give me a little nip while I am sitting in a chair or on the couch to let me know he wants to play. He loves for my husband to chase him around the house. He likes to chase the laser light until he figures out that he can't catch it so he gives up and just watches it. His favorite toy is a feather bird on a fishing line fastened to a plastic rod. He isn't very good at giving kitty snuggles. I just have to scoop him up and hug him while he wiggles to get down. But he knows he is loved very much. 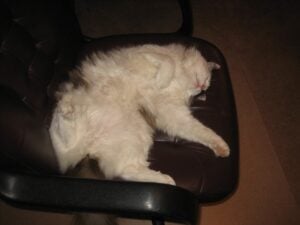 We did have a scare recently. He came down with that dreaded urinary blockage some male kitties get. He was in the kitty hospital for 2 days and 2 nights to the tune of $900 but he is fine now for which we are thankful. Seems he doesn't particularly like to drink water even with the little water spout dish we got him. So, once again, via the internet, we found a pet fountain where the water flows like a faucet in a sink and...believe it or not...don't look now...but he was actually drinking out of it yesterday!

My favorite thing is our little routine at night which we started right away (I didn't want to wake up with a fur ball in my face). His litter box is in the master "toidy" area anyway, so we put him in the master bath...toidy..and closet area at night with the door shut. At 9:00 he knows it is bedtime so I scoop him up (all almost 16 lbs of him), put his bed on the bathroom counter, run the water into the sink so he can get a drink. When he is finished 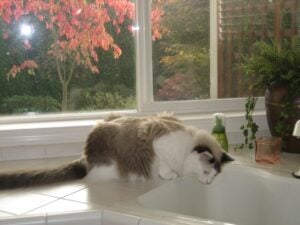 drinking he will sit up straight, I turn off the faucet, turn off the main light, and give him a little lovin' and turn out the light and shut the door. This is our routine every night. If I don't put him down at 9 and go past 9, we are in for a little chase before one of us can catch him.

I love this... "Cats are intended to teach us that not everything in nature has a function."