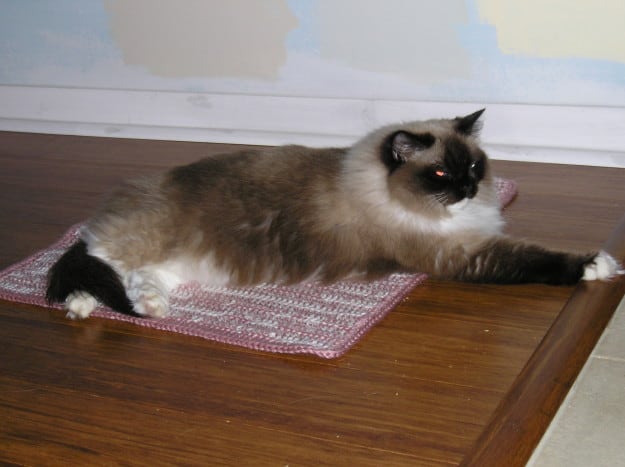 Pandora is a pure-bred, seal-mitted Ragdoll, born February 18, 2003, at a New York breeder.  Today she is seven years old.  Her story might not be what you expect – but it has a wonderful ending. I promise!

Pandora has amazing blue eyes.  Those eyes are what first attract you to her – although I did not know how beautiful they were the first time I saw her.  When I met Pandora in 2006, she was a frightened, matted, scared cat.  She stayed in a curled up ball for months after her rescue.  She weighed only six pounds when she was rescued.  Too small for an adult Ragdoll.  Four years later she weighs eight pounds.  She is the most faithful companion and alarm clock!  She follows me from room to room and supervises everything I do.  I knew very little about the breed before rescuing Pandora – now I would have a houseful of Ragdolls if I could. 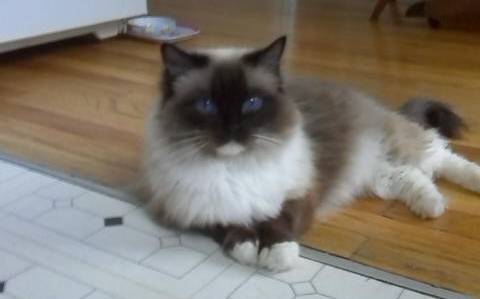 In 2006 I volunteered at an animal shelter.  I heard about Pandora from another shelter volunteer and learned the shelter could not take Pandora in for a number of reasons.  A few days later, I received a call from a friend of a friend, who was trying to help the family giving up Pandora.  The breeder could not take Pandora back and the family could not catch or handle her. They just wanted to get her out of the house. I agreed to go take a look and see if I could help.  That’s where my story with Pandora begins.

I took a short train ride out of Chicago and was met at the station by Pandora’s family.  As we rode to the house, I heard Pandora’s story.  Pandora was the first cat the family ever had.  The children were all in college and Mom was feeling the empty nest.  She wanted a cat and after some negotiations with her husband, it was decided she would buy a Ragdoll.  I am not sure if it was the time of year, but the story goes that no Ragdolls were available locally so they searched out-of-state.  Pandora was located at a New York breeder and it was decided she was the best option since she would be the only cat in the house, the new family was not willing to purchase two Ragdoll kittens, and they were inexperienced cat owners.

Pandora who lived only at the breeder and birthed several litters, was sent to the vet to be spayed and receive vaccinations required for airline travel.  The day after her sutures were removed, Pandora was placed in an airline crate and flown to Illinois.  She was picked up at the airport and taken to her “new home.”  Unfortunately, her new family did not know how to introduce a cat to a new home.  Upon arrival from the airport, the carrier was placed in the middle of the floor, the carrier door opened, and Pandora “welcomed” to her new home!  Poor Pandora!  She was in strange surroundings, did not recognize the odors or voices, did not know where her litter pan was – so she did the only thing her instincts told her –run and find a place to hide. 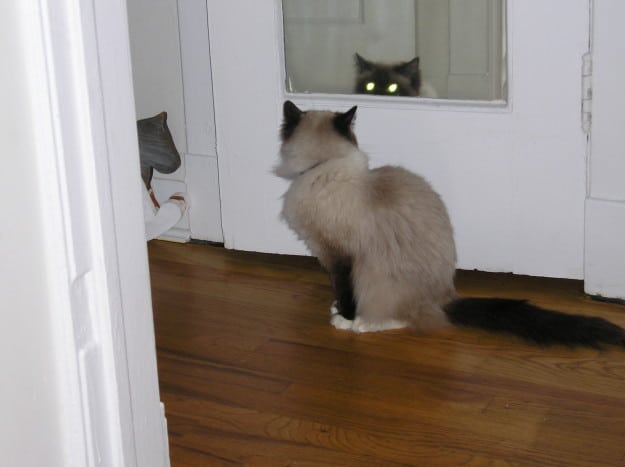 Pandora exploring new space. She saw her relection in the mirror for the first time! I love this photo. She was with me about 2 months in this photo.

Many days passed and the family could not find Pandora.  Unfortunately, they started to smell where she had been.  During a weekend visit from college, the boys and their friends were told to “find the cat.”  They found her and ended up chasing Pandora through the house until she found herself in the basement.  That is where Pandora lived for the next five months.  The family corralled Pandora into a finished basement room that had a door, but no windows.  The room was dark except for the few minutes each day that someone went down to put down food and water, and then would return to upstairs.

Upon hearing this story, my heart was breaking for this cat and yes, I had not met her.  I was led downstairs to the basement room.  Crouched in the corner is a tiny ball of fluff.  Her eyes were so dilated you could not tell their color.

The family told me about their calls to the breeder, and also about how shy Pandora was, and how this was not the cat they purchased.  I knew I had to get Pandora out of there.  Although not prepared to do so, I told them I would take Pandora.  I asked for her carrier, her food, and some used litter to take with me.  I asked them to leave the room while I put her in the carrier.  I was not sure how I was going to do this because every time anyone was close to Pandora, she hissed, spat and swatted.  I inhaled, and slowly approached Pandora, stopping several feet away.  I spoke to her gently and softly.  I told her she did not deserve to be living in that basement and that if she would trust me, I would find her a better home.  I sat there for several minutes and slowly moved closer.  She blinked a few times and I believe she understood what I said. I scooped her up and put her in the carrier – no hisses, no spits and no swats.

On the way back to the train station, the family listed all the money they had “wasted” (their word) on “this cat.”  They asked how much I would be able to give them for Pandora.  I told them I did not have anything but I was willing to take her and take care of her.  I have not heard from them since.

Pandora did not make a sound during the trip to my home. 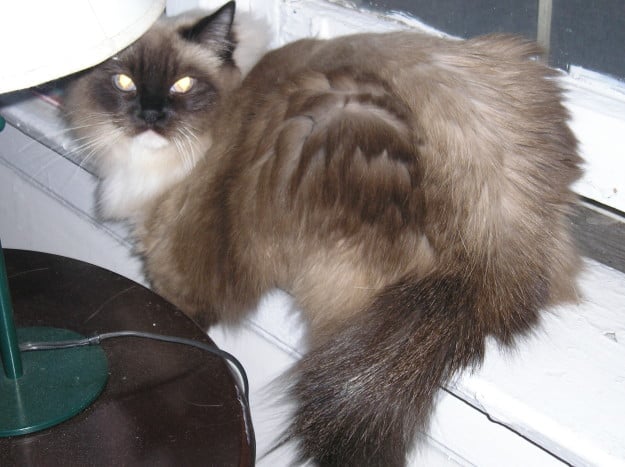 Pandora's fur is filling in around her tail and legs. Still frightened that I am going to pick her up, she is poised to run off.

I was not prepared for a second cat!  I decided she needed the smallest space possible and the bathroom fit the bill.  Having fostered several kittens there, I had a screened gate so Pandora could see and hear all that went on in the apartment.  The bathroom has a window so she had daily sunshine.  My resident cat, who can be cantankerous, could not get to Pandora but they could each smell one another.  At this point, I was treating Pandora as if she were a feral cat.

After getting Pandora settled, I called the breeder to let them know what happened and to try to get another side to the story. It would not add to Pandora’s story to get into the exchange between the breeder and myself.  I only hope the breeder and the family learned their respective lessons and will not put another cat through the stress that Pandora endured. 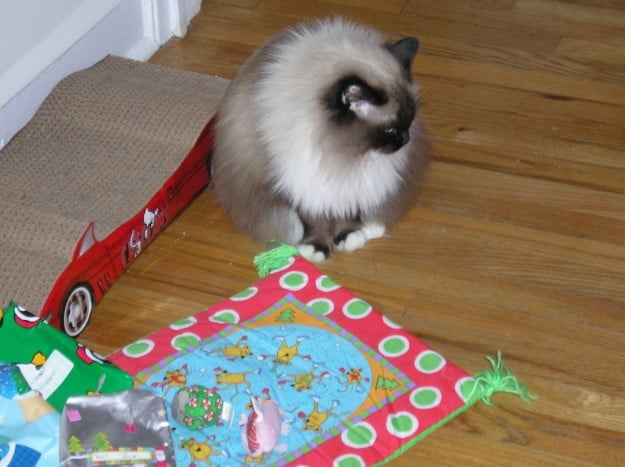 Pandora with her second Christmas with me -- notice her long, fluffy bib

Pandora lived in my bathroom about four weeks when she started meeting me at the door each day.  From there, I extended her space slowing by moving the screened barrier.  It was another four to five weeks before she explored every room in the apartment.  All this time, she would not let me pick her up or get near her.  Any time she felt insecure, she ran back to the bathroom – her safe haven.  The other observation was that she was silent – never mewed a sound!

I attempted grooming about three months after the rescue.  The breeder told me Pandora loved to be bathed, but I still could not touch her and to be honest, I was a little afraid to groom her on my own.  My brother was in for a visit and I talked him into helping me!!!  I was able to trick Pandora into her carrier.  From my days of working with feral cats, I knew how to work with her inside the carrier.  I carefully undid all the carrier screws and slowly removed the carrier top.  I slowly (and I mean very slowly) eased my hand over her shoulders, lifted her out of the carrier and quickly wrapped her like a burrito.  While my brother held her, I shaved the mats from her tail and back legs, trimmed her nails, and removed the mats that I could reach under her front arms.  She never made a sound.

Over the course of the next several months, I picked her up as many times as I could trick her into the carrier.  She was groomed each time and given lots of loving and treats.  Each time I tried to pet her, her entire body would stiffen and her eye would dilate. 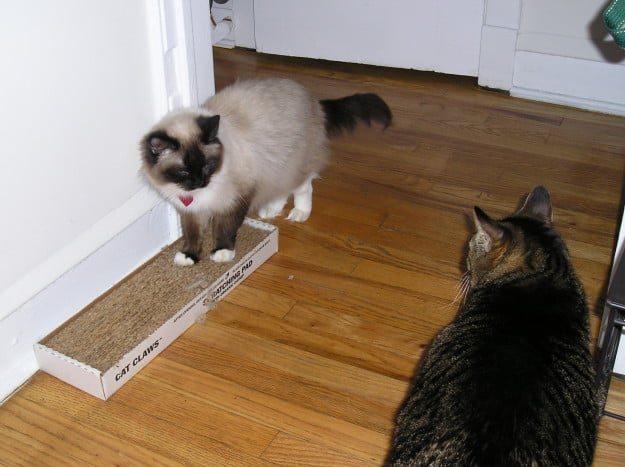 Coffee and Pandora meet face-to-face the first time. The first two months they were always separated by a screen gate and door.

One morning around the 1-year anniversary of the rescue I was wakened by this raspy mew.  I opened my eyes and looked around.  There with her paws stretched up to the top of the bed was little Pandora.  Her mouth was opening but nothing came out – except every other time a raspy “meow”.  She found her voice!  Three years later has not stopped chatting!  Pandora greets me every day when I return from work.  She has wonderful stories to tell and a great vocabulary.  She and her catmate, Coffee, get along well.  They will never be best buds, but they do nap together every day after breakfast and morning grooming is over.

Pandora is most loving in the morning.  If I keep my arms under the covers, Pandora will head-bonk me, purr up a storm, and sometimes, if I am lucky, she will crawl on me and check me over from head to toe!  She loves to be bathed and groomed.  She relaxes most and purrs loudest when groomed. 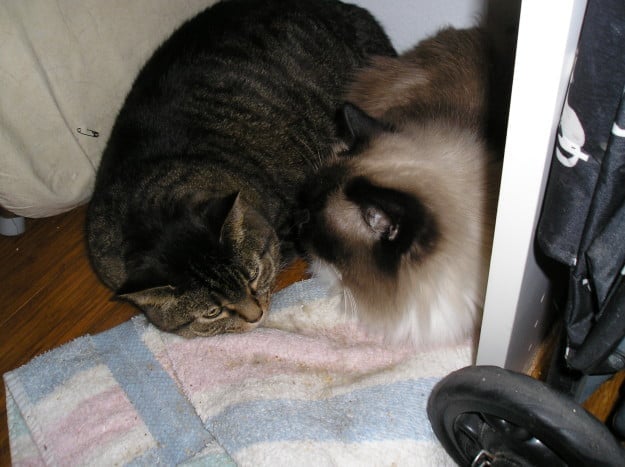 CoffeePandi AFTER move: I bought a condo September 2009. Coffee and Pandora curled up together in one of the closets and comforted each other while all the moving and remodeling was going on.

She produces a beautiful winter coat.  The last two winters, her bib has nearly reached the floor.  Pandora’s favorite toys are felt animals stuffed with catnip.  She carries them around from one place to another.  She tosses them in the air.  Another playtime activity for Pandora is to zoom through the condo.  She races from room to room and leaps onto window ledges and counter tops.  Coffee and I just sit on the sofa and watch her with amazement!

I now love the breed so much that I will look for a Ragdoll to adopt or rescue again.  I know that my next Ragdoll experience will be different.  Still Pandora taught me a lot about the breed.  She truly is resilient and despite all that she endured, she has learned to trust that I will keep her safe.