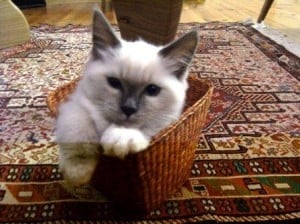 Meet Buster, my three and a half year old Ragdoll (he will be 4 in February 2013 – the same time as my niece. That is how I remember when it is her birthday!).

After I moved into my apartment about 4 years ago I felt like I needed some company (and husbands are so high maintenance) so I researched some suitable apartment pets. I have always loved cats but I didn’t want an aloof, take-me-or-leave-me type and so Ragdolls seemed to fit 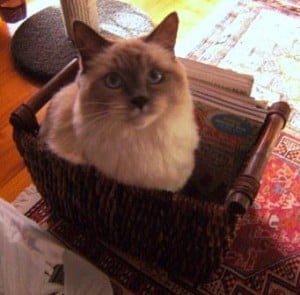 the bill. At the same time someone at work was advertising her mother’s latest Ragdoll litter so it was fate.

Buster is pretty much as his name suggests – he is always barging his way into spots he shouldn’t. The first weekend he came home I had to rescue him from the back of the fridge twice and hope I didn’t squash him in the process. Baskets, cupboards (he gets locked in those a lot), draws etc 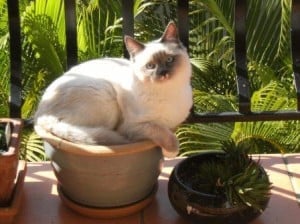 he is too busy sleeping for 18 hours a day to be bothered doing anything else. Although when I go away and he is left with a sitter he does do a bit of attention-seeking – I came home one time and found he had pulled apart a whole role of toilet paper and left it strewn across the bathroom floor. He is also found of chewing or sitting on any pot plants I have so I am reduced to cacti as a balcony plant – they don’t seem as tasty to him as my herb garden was. 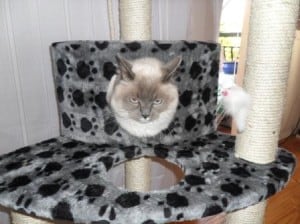 His favourite toy is a severed leg stuffed toy that his ‘Aunty’ gave him and a little teddy that he likes to play fetch with. He likes is super tall cat scratching tower – although he was a bit sceptical about the cubby hole. He does actually fit though!

Mostly he just loves to sit with me, on me on the sofa and relax. He gets his kicks by racing around the house after an invisible mouse and he thinks he sees geckos on the ceiling (it is just shadows – to his disappointment). Birds scare him but he is a good watch cat – he knows when someone is coming to the door before I do. 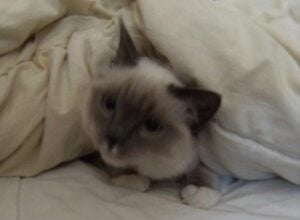 Buster has developed a bit of an allergy to fish would you believe so he is on a special hypo-allergenic diet – which he hates of course and he would just love to sink his teeth into my fish dinner if he had the chance. If anyone can suggest some variety I can provide for him that would be great because the tantrum he throws at dinner time when he gets the same thing day after day is worse than the one my niece throws!

Despite his shenanigans he is my absolute best friend and a real charmer with house guests. So he can definitely stay.

5 thoughts on “Buster – Ragdoll of the Week”