It has taken me a while to be able to sit down and write the story of my beloved Ragdoll, since I'm still unable to come to grips with his terrible death on September 21, 2018. He was exactly 18 months old and was born on March 20, 2017.

I've always loved cats and especially since I became a widow the presence of a living creature in my life meant a lot to me. I had a Himalayan cat who died of old age about a month before I bought my Ragdoll.

Before I decided on the breed I scanned the internet and it was a toss up between a Main Coon or a Ragdoll but checking on the reviews of owners I decided on a Ragdoll.

I then checked on various breeders and found none close to where I live but then saw a write up of a breeder, called JESSICA PERRY, in Texas, and some of the reviews on her website were positive. I called her and she told me that she has kittens available that were born on March 20, 2017.

I paid a deposit for a male kitten. She said she charged $2000 for the kitten and that he would be sent by air when he was two months old. I paid for the airfare and picked him up at the airport on May 15, 2017. 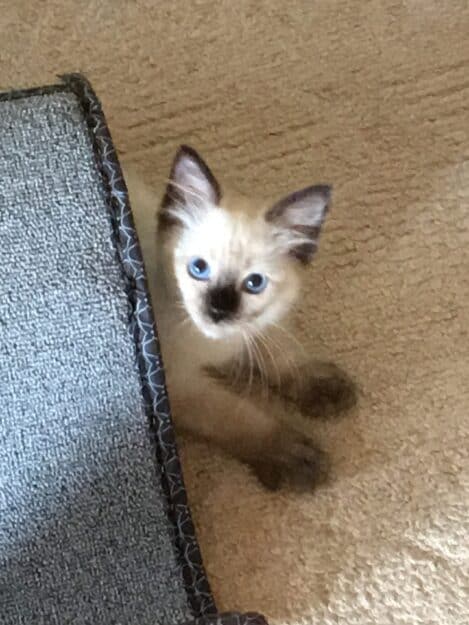 I decided to call him "Jannie", after an uncle of mine whom I loved dearly. I brought Jannie home and for the first two days stayed with him in our bathroom and we bonded. I fell in love with him almost immediately.

He had the most beautiful blue eyes and were so affectionate. He would climb up on my chest and lick my chin and then give it a little nip.

At the beginning he was famished and ate at least three cans of Fancy Feast seafood and chicken a day, in addition to Purina One dried food and the skinny little thing grew rapidly into a beautiful kitten.

He followed me around the house from room to room, in effect almost became my shadow. He loved to play with toys that had little balls in them and was extremely active during the day and slept with me at night, cuddling up against my back. 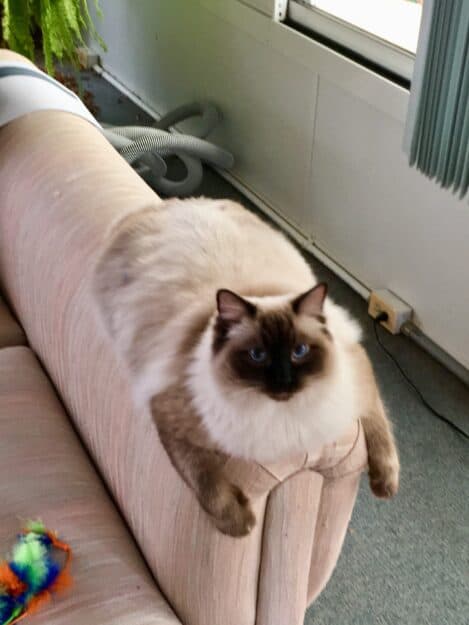 During the day one of the places that he liked to sleep in was my water basin. I guess he liked the coolness and could roll up in a little ball. 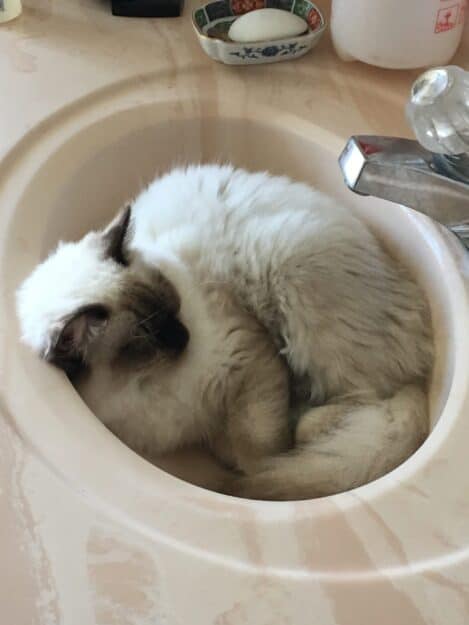 I could not have been happier. He was a perfect companion and so loyal. I've always had cats all my life but nothing like Jannie. 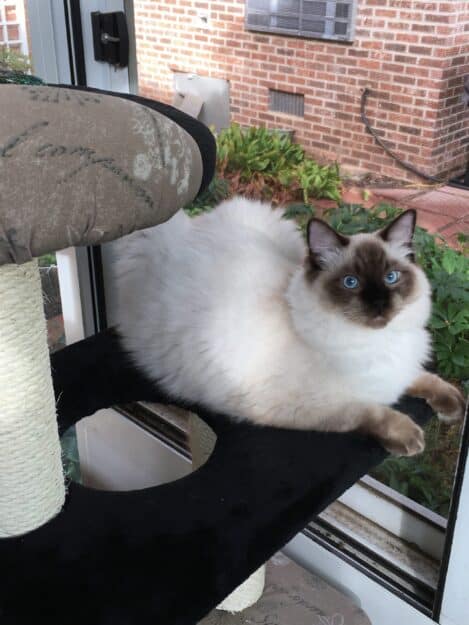 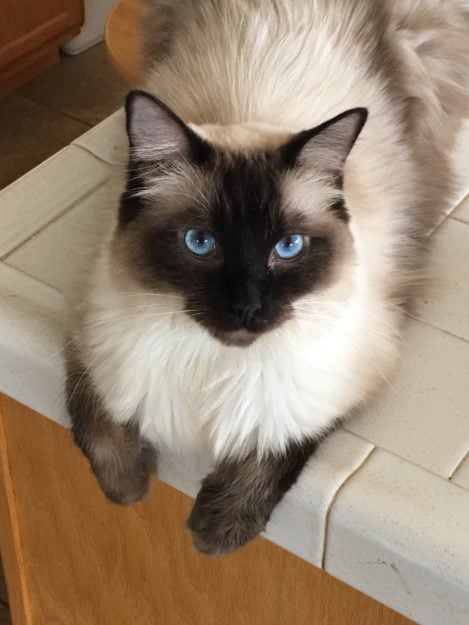 But then--During the first week of January, 2018, he suddenly changed. Instead of following me around the house, he tried to hide from me. I would find him underneath my bed or behind a cupboard during the day, lying in the dark.

He stopped playing with his toys and lost his appetite. I was greatly puzzled and whereas I usually do not take my cats to a vet because of behavioral changes, the sudden change alarmed me and made an appointment with my vet who saw him on January 8, 2018.

Dr Clark examined him and listened to his heart and looked up to me and said: "He has a very loud heart murmur. He has to be seen by a Veterinary Specialist immediately."

Fortunately, Dr Paling, had an opening the next day in Charlottesville, Virginia, about a two hour drive from my home, and I had him in her office at 10 AM on January 9, 2018.

She did an echocardiogram (cardiac ultrasound) and her findings were as follows: "This shows that Jannie unfortunately has a heart condition called HYPERTROPHIC CARDIOMYOPATHY, OR HCM.

This condition is genetic, or HERITABLE, in Ragdolls. His HCM is unfortunately already moderate, and he is at risk for recurrent heart failure. He is also at risk for abnormal heart rhythms and for having a blood clot form in his heart that can go out to his body." She immediately started him on a beta blocker to control his heart rate and rhythm.

She also took a sample to test for HCM and sent the sample to the VETERINARY GENETICS LABORATORY. Two weeks later the test came back Positive Homozygous. This meant that he had two copies of the mutated gene. He thus got a copy from each of his parents.

They may not have shown signs of the disease but were carriers, and every kitten born in that litter must have inherited either one, or two, of the genes.

I was absolutely devastated and immediately informed the JESSICA PERRY about these findings. In fact, I kept her informed about all the tests that were done on Jannie, including the genetic test results.

To my amazement the only response that I got from her was that I should inform her when Jannie was no longer alive and that she the would give me another cat. It just stunned me. This woman clearly did not value the lives of the cats that she sold. They were just "cats" or things, and the more and the quicker she bred them and sold them at $2000 per kitten, the better.

She obviously did not to care that there are millions of people out there, like myself, who value the lives of our pets, who grow fond of them, who bond with them, and they literally become part of the family. The most amazing of the whole affair is that a genetic test costs a measly $35, while the kittens are sold for $2000 per kitten. I did not want another cat, I wanted JANNIE.

I will make make the rest of my story brief: I gave Jannie the beta blocker every day, without fail. But then he became quite ill again, and I listened to his heart. I'm a retired physician but still have my stethoscope. He had developed an abnormal heart rhythm and had water on his lungs.

I rushed back to Dr. Paling and she did a follow up echo-cardiogram and she confirmed that his heart was much bigger and that he had heart failure. She increased his beta blocker and put him on two addition medications: A water pill to remove the fluid from his lungs and another to prevent blood clotting. The visit took place on June 5, 2018.

I gave him the meds religiously every day even though it was not easy to give three different medications to a cat who no longer would eat canned food. But I persisted. I wanted to keep him alive as long as possible.

The night before he died, September 20, 2018, was like all the previous nights. He slept with me and I watched that he ate some dried food. In the middle of the night I must have turned on my back but I woke up with Jannie lying on my chest and he was licking my chin and then gave it a little nip. I gently stroked my lovely Jannie telling him how much I loved him.

The next morning, September 21, 2018, I woke up and opened the door and he bounced out down the stairs ahead of me, as he always did. Then at the bottom of the stairs he suddenly collapsed.

I noticed immediately that is hind legs were both paralyzed and he gasped for breath. Oh how he tried to get up but could not and just groaned and groaned. He looked up at me with a pleading look in his eyes. I was in total shock. It was exactly 7:30 AM and I rushed him to my local vet. He was in the process of opening his office and immediately took care of Jannie, giving him a sedative and a pain killer.

Jannie  was in agony. He had both a stroke and was in severe heart failure. My vet then asked me to leave them alone, to go home, and to call him after about an hour, which I did but I could hardly speak. I knew what he was going to tell me and he did: "Helena, Jannie is dying. He cannot breath and is in agony. May I put him out of his misery?" I gave the permission for him to euthanize Jannie.

I wrote to Jessica Perry, telling her that my beloved Jannie died a horrible death, a totally preventable death, if she had the heart and sympathy and the care to test her breeders for this disease, HCM. I ended the letter with these three words: SHAME ON YOU.

But I doubt it made any impact. I noted that she kept changing her phone numbers and e-mail addresses. When I bought Jannie from her it was: www.RagdollKittens.com. Then later on it became: [email protected] Ragdollkittens.com and then RagdollKittens.net/kittens. This is a breeder without a conscience.