Update March 2, 2021 - Current Ragdoll Breeder scams online (believe me, there are many more than this!)

A reader wrote in, "I’m very appreciative of you posting fraudulent breeder websites. I have been corresponding with a man using the name Kimberly Ragdolls. He is offering to sell me a beautiful female kitten for $350, including shipping from Pennsylvania to Arizona. I asked him to forward a copy of his contract. He appeared to change the name of the breeder at the Beginning of the contract, but erroneously left the name of Cristar Ragdoll Cattery at the bottom. He has now ceased corresponding with me once I questioned him on it. I wanted you to have the new name he is operating under so you can list it also. Seems this guy has had several fb pages.

They don’t have a website this time - just their Facebook page. But they are seeking out buyers on the American Ragdolls fb page. They replied to a post earlier today listing their info and pictures of kittens. I reached out to them as I am currently looking for a female. I just looked back on fb and it appears they deleted their comments with their info. But their fb page was Kimberlyragdoll kittens. I have messed with this guy all afternoon questioning him. I sent him screenshots of all the business names he has gone by and all the stories buyers have reported about him. He claims it is just fraudulent buyers trying to give him a bad name.

He’s definitely a fraud. He went from messaging me on Facebook messenger, to texting me, to using WhatsApp. I questioned him why he kept switching and he said to make sure I was legit! Lol!

Thanks for looking out for buyers! I appreciate it!"

UPDATE - June 28, 2020 - another Ragdoll breeder scam / fraud - Premium Ragdolls. Doing the same as this one below, but using a photo of my sister with our parents' cats on their Premium Ragdolls Cattery's fake and fraudulent website:

A few weeks ago, I received the following e-mail. 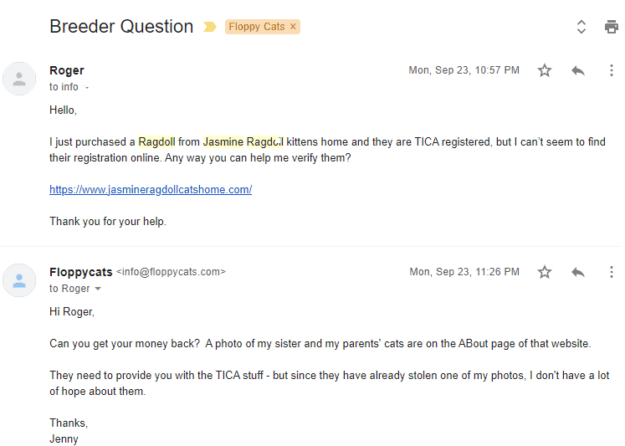 You can see my response... and here's a screenshot of their About page which is a photo I took of my sister and our parents' cats!! Definitely not their photo! 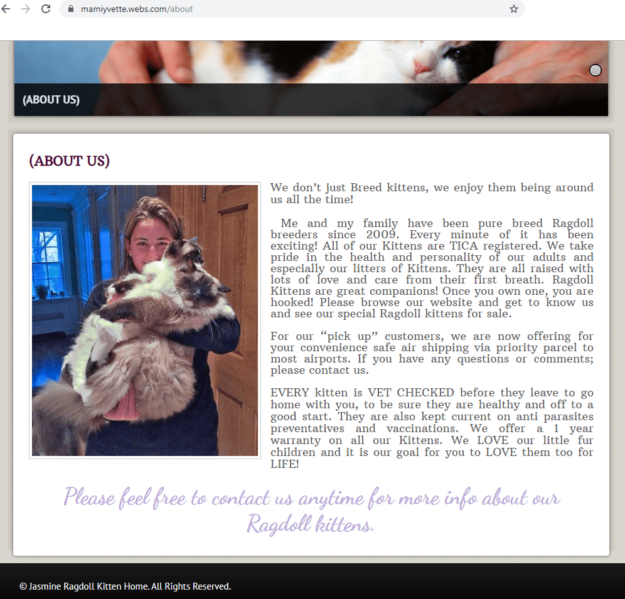 You might wonder why I am posting all of this info - it's so that it is searchable on Google and the like - so that someone can see they are a scam. I submitted fraud alerts online and so did Roger, but it will take multiple offenses for these people to get really caught and stopped. I am hoping this will help.

I did ask on Facebook - and did what everyone suggested, including contacting them.  They told me they would remove the photo - that was on Sept 24. It's October 8. 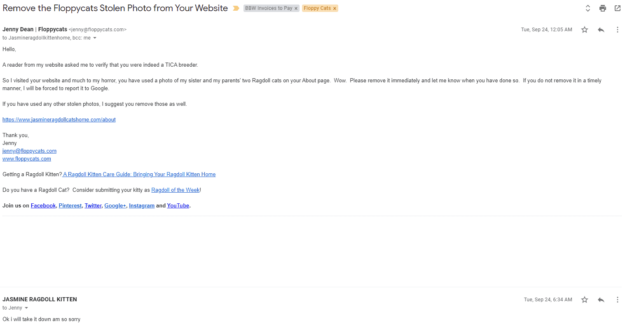 I am hoping this post will make them stop and also make others stop that might be doing the same.

...on to bigger and better things!

How to Find a Good Ragdoll Breeder