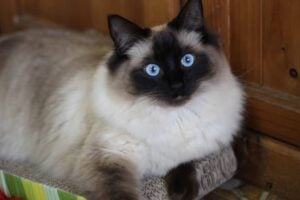 My name is Carissa and I have had cats most of my life. I always dreamed of owning a ragdoll for their striking looks, though I didn’t know much about them. When I left home I never had the right place for a cat and I really missed having one.  Then I met Andrew a few years back and he was renting a place that allowed pets!

We first got a little English Staffordshire (Duke), and after a while I thought I would try my luck convincing Andrew to get a cat. Having never owned a cat Andrew was a little tentative,  so it became my mission to help him fall in love with them. I showed Andrew so many cute kitten YouTube videos and it didn’t take long before he came around (or in his words, he finally got sick of watching kitten videos :p). 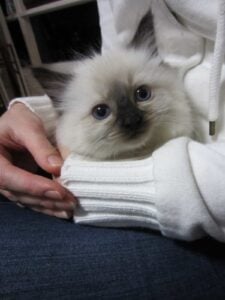 Andrew and I both liked the idea that the Ragdoll was known for being placid much like a dog (because of course whatever we got would need to get along with Duke!) I was so excited to get a Ragdoll, but unfortunately I had decided this out of breeding season and I could not find a female seal point kitten anywhere!! In the meantime I set up our back room with everything a kitten could ever need. Then I was lucky to come across Deltadolls Ragdolls who had two seal point girls available born April 12 2012.  The breeder- Lynn was kind enough to drive two hours and visit a friend who lived near us so that I could pick out one of the kittens. I chose the little girl with the orange neck tag (tbh I couldn’t tell the difference between them!) . I officially named her Jarrah Rose, though have only ever called her Jarrah. I got the name from another breeders website I was going to get a Ragdoll from, but unfortunately the breeder had misdiagnosed and her cat wasn’t pregnant!  Jarrah settled in nicely and we gradually introduced her to Duke, who was so excited to met her. We have a YouTube video of them meeting if anyone is interested. 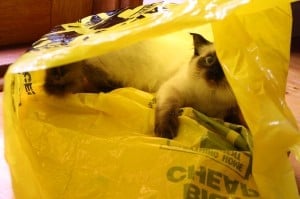 To my surprise Jarrah has turned out to be quite possibly the craziest cat I have ever had!! We love that she has so much character and has brought a lot of laughs to our home. Jarrah likes to follow us around the house and is into everything! She loves going outside and we discovered will scale the wire door if you go outside without taking her.  I’m hoping to get her an outdoor enclosure soon but until then, we either carry her outside or she goes on lead. 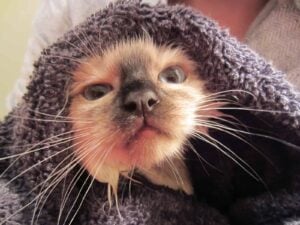 Jarrah’s favourite pastimes are: Hiding in plastic bags, chasing insects, eating grass like a cow (and like Duke!), eating my flowers (I can’t have my favourite Lilies in the house anymore as they are poison to cats!), stealing the Dukes bed (we call it her bed now) and cuddling on our laps while we are on the computer or watching TV.

Jarrah also has some odd yet cute things about  her. In the mornings she gets what we call happy tail, where her tail curls onto her back, she purrs loudly and is super friendly. Also, unlike a lot of Raggies you see online, Jarrah prefers to dangle rather than flop on her back when you hold her. 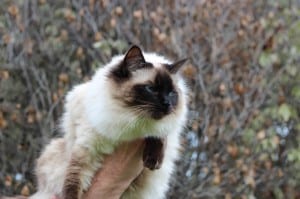 I recommend that anyone who has a cat should buy a decent scratching pole (with rope rather than carpet) to save your furniture. The best toy I ever got Jarrah was a ‘Go Cat Da Bird’ feather wand that acts/ sounds like a bird and she goes nuts for it :).

Hope you liked our story. To see more of Jarrah and to meet Duke, please visit our YouTube Channel AndynRissa 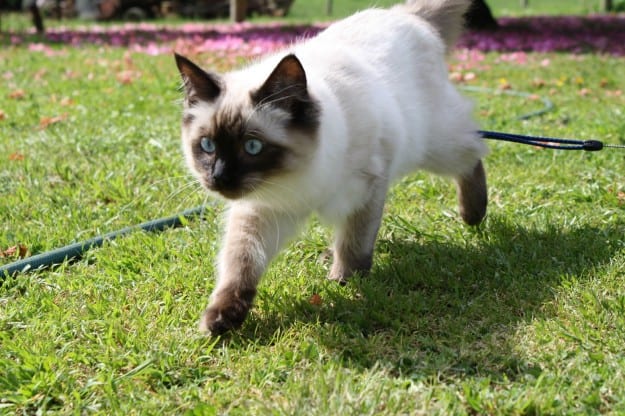 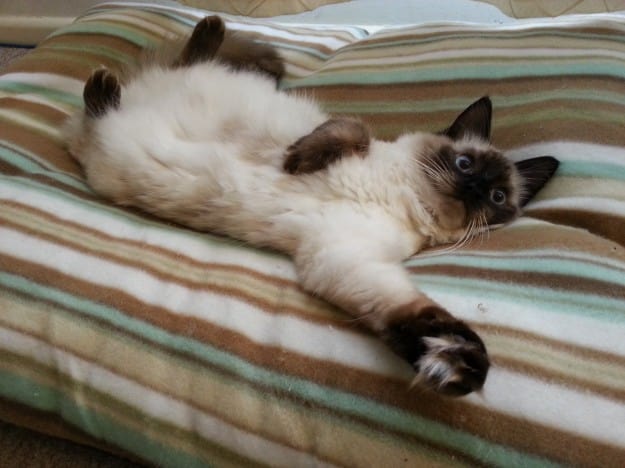 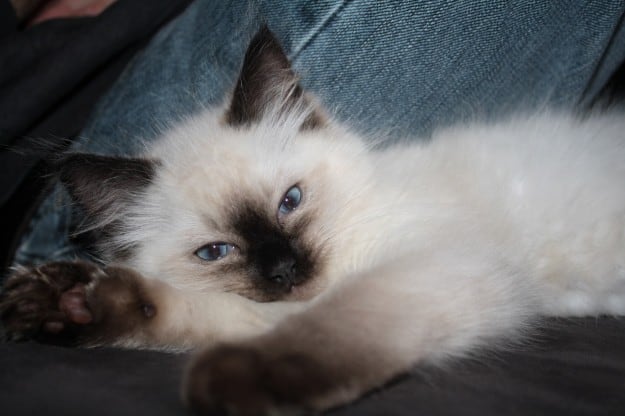 13 thoughts on “Jarrah – Ragdoll of the Week”