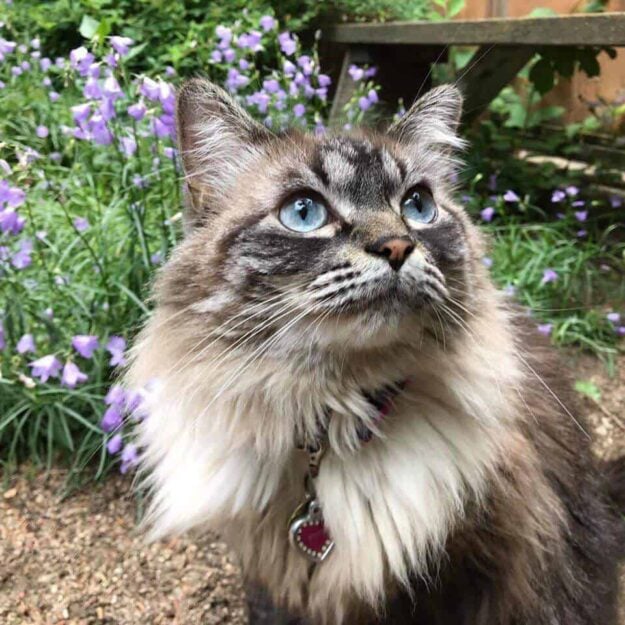 This is my darling Shama. She was born on March 8, 2017, one day before my darling Tonkinese Topaz passed away at the age of 17.

Topaz was a wonderful cat and I missed her terribly but I knew I would not be able to replace her. I researched all breeds of cats and the Ragdoll breed won me over completely.

I live in a fairly remote region of Canada and so there are few breeders here but luckily Shama appeared on an advertisement when she was just over one week old.

I saw the picture of the litter and I was hooked. Several email conversations later I had befriended her breeder Jeremy who had two wonderful Ragdoll parents that had just had a litter of 5. 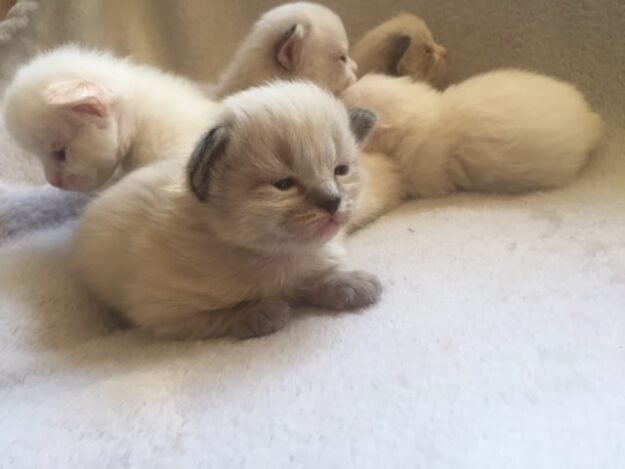 Front and center in the picture was Shama. You could tell she was already full of personality as she posed for the camera already at such a young age.

I was able to take Shama home earlier than expected on April 28, 2017. She was only 7 weeks old but there was no stopping her. She seemed to know me immediately and completely relaxed in my purse as I took my very first picture of her. 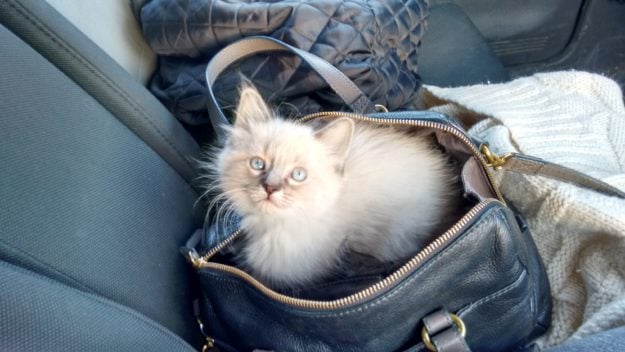 The most difficult thing with raising such a small kitten was finding her when she was investigating strange corners in the house. 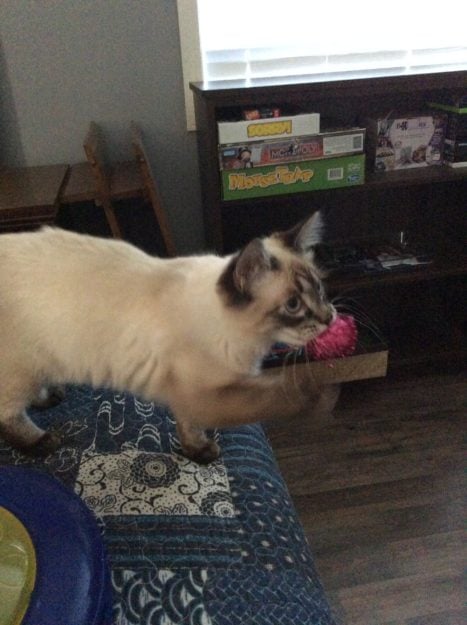 Being a Ragdoll she was actually a lanky little girl who could skip up and down the stairs. It only took one day for her to know where her litter box was, where her food was, and that dogs are fun to climb on. 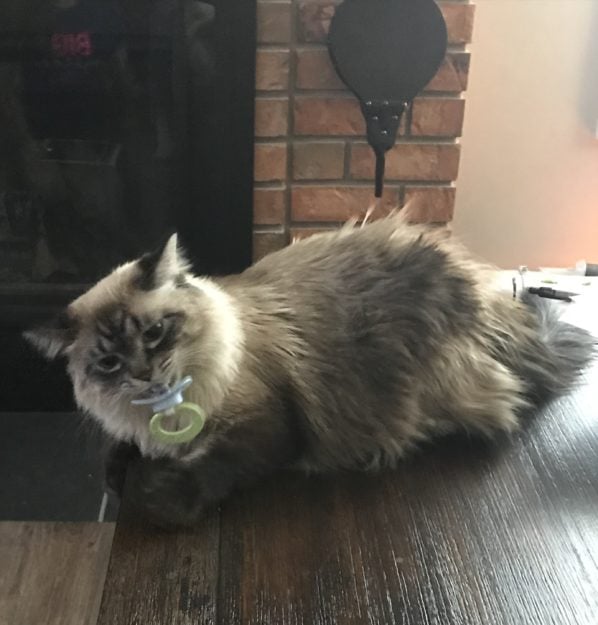 Shama revealed an incredible sense of humour as well as intelligence when she figured out how to bathe her fluffy pom pom toys in her water dish before carrying the soggy result to my shoe, dropping it in and shoving it into the toe.

The toy was never found before my foot was inserted into the shoe which was followed by a squeal by me and I am convinced there was laughter from Shama. This happened often enough that I did learn to check my shoes before putting them on. 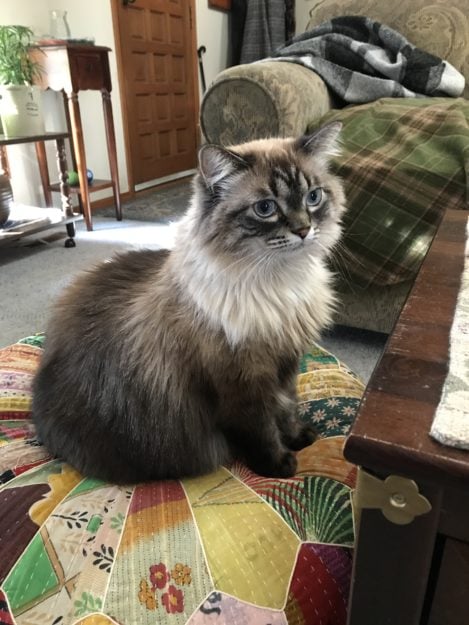 Watching Shama grow up into the beauty that she is now has provided me with pure joy and amazement. She is the kindest and most intelligent cat I have ever met and I feel honoured to be her human. 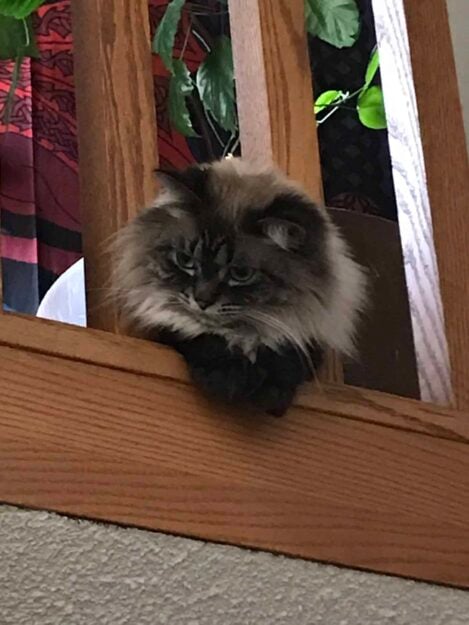 She loves children, adults, dogs, and other cats. Her favourite pastimes are watching the blue jays, sunning herself on her tree house and convincing me to play laser butterfly with her. I cannot ignore her if she wants to play. She will tap her paw on the coffee table and stare at me until I relent and the chase is on. 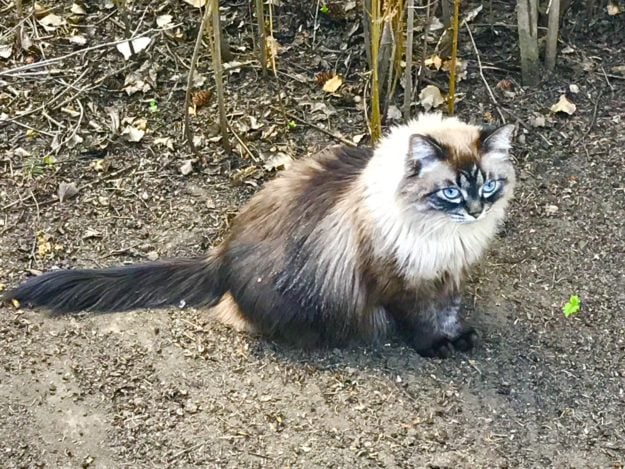 At the end of the day I get pounced upon and Shama chirps until I get her favourite brush and groom her. She’s very particular about having every piece of fluff in place. She sleeps curled up against my leg and in the morning, I will usually find three toys she has brought me as gifts. What a wonderful way to start my day. I am loved by an incredibly wonderful kitty spirit.