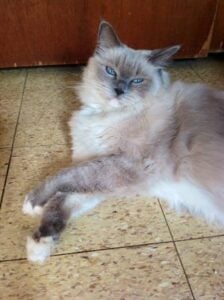 Look at my gorgeous girl!

Hello, I'm Ragdoll Mommy; from my blog, Life With Ragdolls.

I have a beautiful Ragdoll cat named Anya. She is a Blue Mitted. She is 5 years old. She is incredibly BEAUTIFUL!! She loves to play. She dislikes a lot of people around, due to the fact that she is a little shy, I think the reason why Anya is shy is because, actually I really don't know why she is shy. But it is NOT from abuse or anything! Maybe she was just born like that. No telling.  Anya loves catnip! It also makes her go pretty darn crazy! Lol:d

She is sadly declawed. I did not do it; I do not believe in declawing! She is spayed as well. I got Anya and her brother Nico, on July first, Sunday, 2012. They were also only 3 years old, almost 4 years old.  Anya is "eye candy, meaning someone or something that is pretty or handsome. Better yet she is MY eye candy!  Anyway...... I have ALWAYS loved Ragdolls! 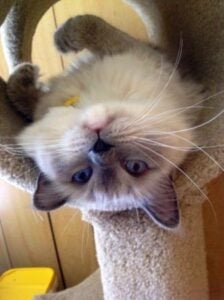 Anya is my very first (And only) female Ragdoll. I have had three Ragdolls in my life time. And I just love the breed! I am actually very interested in breeding Ragdolls. I have never been a breeder. But I sure do know lots and lots and lots on Ragdolls!

Anya and her brother Nico were born in Georgia. In August 14th,Thursday, 2008. Both of my Ragdolls are registered with the TICA, both are 100% real Ragdolls. I have both of their papers for proof of registration and breeding rights; both of their parents are 100% real Ragdolls, both are registered with the TICA. Their parents are retired breeders now. They are both living in a clean and loving home.

One of Anya's favorite things to do is lay down on her back and sleep the day away! As pictured below in the typical Ragdoll  Pose!

As I mentioned above, Anya is a Blue Mitted Ragdoll, but like almost all Mitted Ragdolls,they have (or should) have coloring on the back of their ankle. (On their hind legs,only!). But Anya only has one colored spot on her ankle, when she is supposed to have coloring on both of her ankles, but that doesn't mean I do not love or care for her any less than Nico or my mixed-breed cats!

Anya is the Princess and she obviously knows it! LOL!

Anya loves to sleep with me. And guess what???

She and Nico are leash trained!!!! Both of them know how to walk on a leash like a dog.

Anya is being feed Purina cat chow complete for adult cats. (So is Nico). I know that's not the healthiest thing out there,but it is the only food that doesn't make them sick. And both of them have been 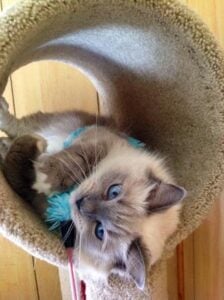 Anya with her toy.

eating that their whole life, so I have been keeping them on that.

Oh and did I mention that she knows how to open doors???

It's true she does!

Anya's favorite toy is her ladybug. That she has kinda torn up.....LOL!

Anya has also de-stuffed a toy before!

Anya also likes to wake me up at 5.00 in the morning! 🙁 It's very annoying! But afterwards, she purrs and purrs,while I pet her and ask why she woke me up. Lol

Anya is the most beautiful female Ragdoll in the world! I swear it!
Anya and Nico also have a kitty condo. She loves to sleep up on the top loft, because she is pretty shy and she feels safe up there.

I absolutely love and adore both of my babies! 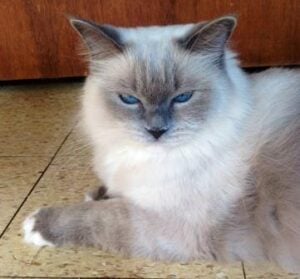 Anya's favorite place to hide is usually under the love seat or under the couch. Anya also has six  cat collars, one is her baby collar. She loves to snuggle with me. She loves to be held too. But usually only by me. She doesn't really like men, she has pretty much always picked women over men. Anya has one leash,and two harness. She also has one to id tag. It's blue kind with shapes on it. She loves to drink water with ice lol!

She doesn't like dogs (they scare her), she also doesn't like small children, or other cats, except Nico. She loves to be brushed and petted and hugged.

Anya is such an angel.........Except sometimes she can be a little Princess diva! LOL!
Anya has pink paw pads on her back paws,but she has a mixture of pink and blue paw pads on her front paws! It's adorable!

Anya also has one black claw on her back paw! I mean it isn't whole black, but it sure does have black in it, and it's not dirt. She gets a monthly bath, and so does Nico.

Anya loves wet food, but I don't give it to her often, because it makes her sick.

I  hope everyone loved Anya and her story!