×
Home » Cat Products » Cat Litter Box
On Friday, I published our interview with certified cat behaviorist, Ingrid Johnson.In the interview, when we start talking about cat litterboxes (because one of the two main reasons she is called to someone's home is because of improper cat elimination issues), she says:[...] The automatic boxes and the Litter-Robots and the Litter Maid and all of that stuff, the Tidycat Breeze system, all that stuff keeps me at a job. It’s contraction-y and the cats don’t want to use it. And it scares them, they’re too small, they don’t get washed out enough. 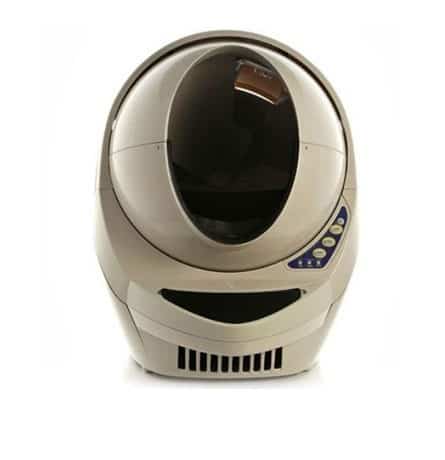 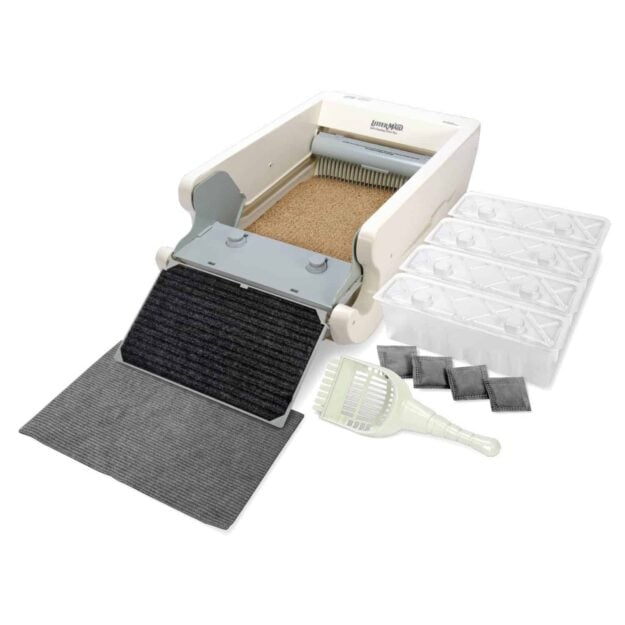 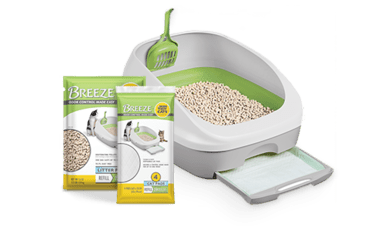 The Litter-Robot where the bottom is the top and the top is the bottom, that’s gross. The cats don’t want to get in there and rub their body up against the body walls of the litter box that had pee and poop on it earlier before it spun around. It’s yucky. They’re very clean animals. So, we do a lot of things to hide the litter boxes and put them behind cat doors and in closets. Just have a nice clean big litter box in a prominent place and keep it scooped.Jenny: I felt the same way about automatic litter boxes for a long time. And I reviewed the Litter-Robot, and we have one now. And I’ve changed my tune about it only because of my personal experience with it. But I do know that it can get gross if you don’t keep it clean. But I’ve learned it’s so important for folks that – like a firefighter for example who is gone for 48 hours and can’t scoop the litter box, or someone that’s disabled that can’t get the litter box scooped. So, I think that they do have a place, but you have to be cognizant, again, looking at your cat and seeing them as an individual, seeing them as what works in your life, your lifestyle. I had a blind person contact me because they needed a solution because they couldn’t keep their cat’s litter box clean except for the person that came by once a week. So, I understand the argument there.Ingrid: And I think that if you’re going to have something like that, you should always have a traditional box as well. Because the other thing about the automatic boxes is – now of course for the blind person, it might not factor in so much, but we take away very vital information that we need to know. And we need to know how big are those urine clumps. Are they small? Are they huge? Are they normal? How many urine clumps are there, and what’s the consistency of the stool? What goes in our cats and what comes out the other end are really big indicators of our cat’s health. And when we take that information away, we lose a lot of early signs that something might be wrong.To be honest, I was NOT surprised that Ingrid felt this way about automated litterboxes - afterall, readers have written me telling me that Jackson Galaxy is opposed to them as well.Both Ingrid and Jackson deal with cats who have improper elimination problems stemming from poor litterbox situations AND MORE, and I can definitely see how an automatic litterbox isn't always the right choice for a cat, an owner, etc.

Litter-Robot Has NOT Been a Bad Thing for Us

As with anything, there are exceptions to the rule.After having one for nearly two years and reviewing it and hearing about all the success stories, it is hard for me to think of the Litter-Robot as a bad thing.Certainly, before I reviewed it, Ingrid's perception of it reminded me of how I felt about the Litter-Robot before I realized how many people (disabled, arthritic, visually impaired, people in chronic pain, people with really busy lives) have benefited from the invention of the Litter-Robot. Of course, their cats have benefited too because they have a "clean" (scooped) litter box - and a regularly scooped litter box is one of the first things to look at when you have elimination issues (if it isn't health related).I have included a video I posted on Facebook below about Trigg watching our Litter-Robot cycle - sometimes when I scoop the litterboxes, I accidentally activate the weight sensor in the Litter-Robot. Trigg, who was sitting on the basement stairs, heard it start to rotate and ran down the stairs to watch it. That's when I grabbed my phone and started recording this.As she mentions, one of the reasons she doesn't like automated boxes is because she talked about the cat having to go into a globe where there's dust all over the sides of it on the inside (but ultimately said, she would be OK with one being in the house as an option for the cat - as long as they had a normal litterbox to use too). Certainly, that could be the case depending on how the owner keeps the LR clean or not or what time of litter they use, etc.I think she is also coming from a perspective where she is always encountering cats that have problems - elimination issues, etc. The choice to have a LR and to know whether or not it works for you, your cat and your home is subjective.Is it for everyone? No. But, after having ours for 2 years and hearing how much so many owners love it - I can't see it as a bad thing. Every situation is different and every home is different.I would be curious to know your thoughts on such a thing - please feel free to share below.