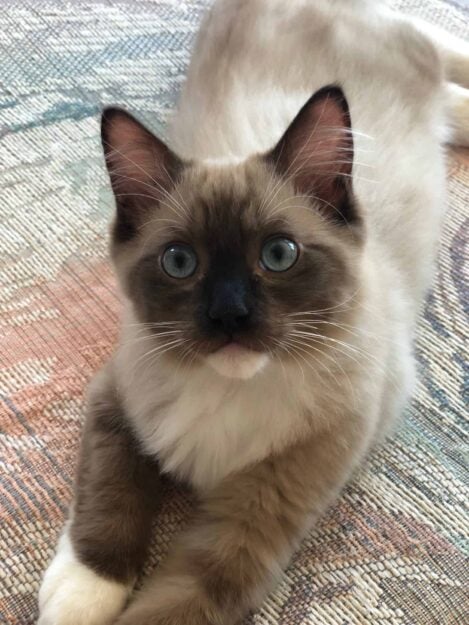 This is Jakku. He and his brother, Anakin Skywiskers came to us from a very good breeder named Ragdoll Cat Spot. I had many references and she came very highly recommended. It was so exciting choosing the boys when they were born. I originally wanted both cats to be dark brown, but I ended up with a mink and a traditional, both mitted. When they started to grow, Seanna, the breeder, sent me many pictures and described his big personality – she said he was always underfoot and knows he is absolutely gorgeous so he was a complete troublemaker. He was also, and continues to be, very vocal. 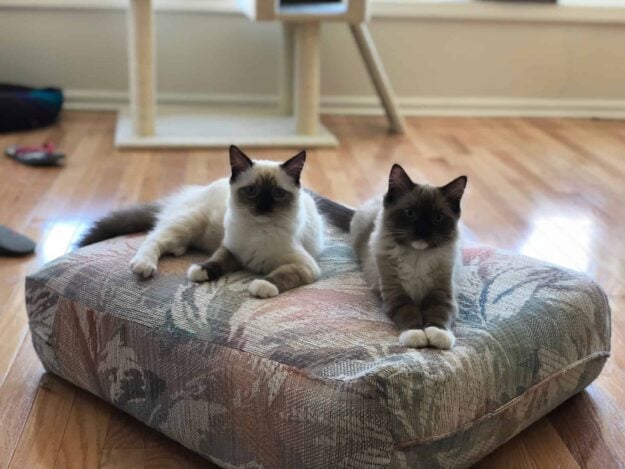 Jakku is named after one of the Star Wars planets and Anakin is named after the one and only Darth Vader. The two are inseparable. Between them, Jakku is the more playful. He definitely does not play by the rules and is living on his own terms. He is not a lap cat unless you’re eating something enticing. 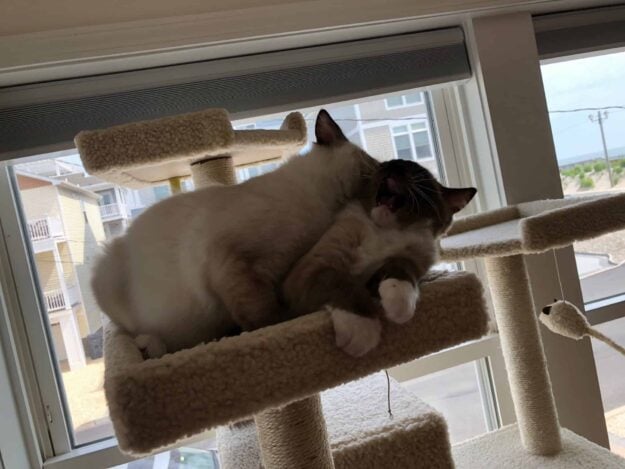 But when he is lovable there’s no stopping the purr. He jostles his brother Anakin from a sound sleep to pounce and play. They groom each other often. 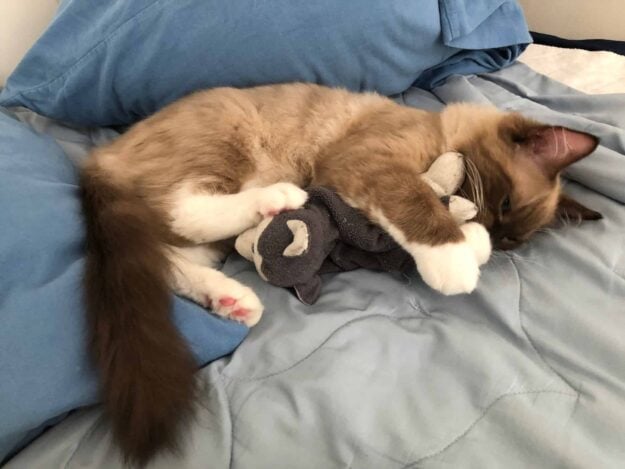 During the wee hours of the night, he can often be found in one of our beds, licking, purring and chewing on our ears and of course, lovingly squawking for pets. We are trying to teach him how to tell time lol. 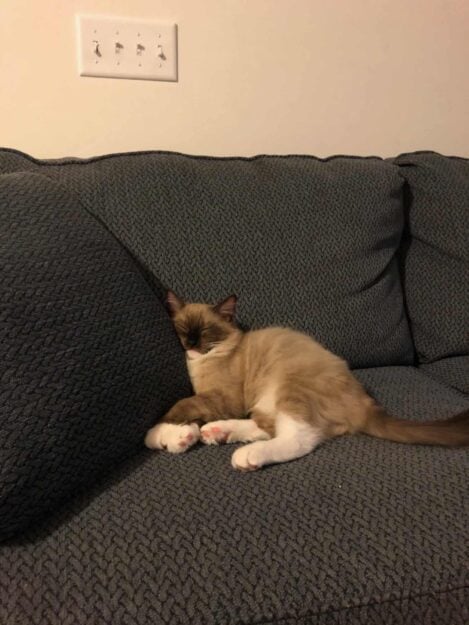 Life without our blue eyed brown furred boy was boring. No more with this guy under our feet. In the pictures you can see him at our shore house living the life. They enjoy fresh water from the sink after a snuggly pounce war on the giant cat tree. This is, of course, followed by a nap and a wake up with a giant yawn. Back home, he cuddles with Grable, our 3 year old’s favorite stuffed animal. He can always be found at our back door where he watches “cat TV” that includes fun times with squirrels, bunnies, chipmunks and tons of birds. 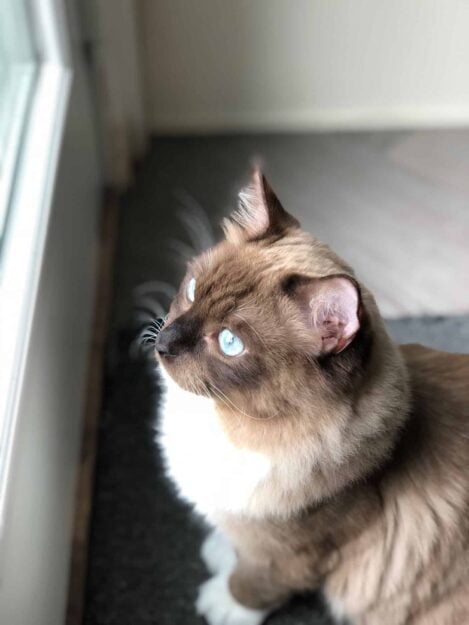 My husband was not completely on board with having these cats, and by far, Jakku has become his favorite and has truly completed our family of 6 that includes 4 boys ages 3, 5, 7, and 9. Of course both the cats are boys leaving me again as the only girl in the house still!! 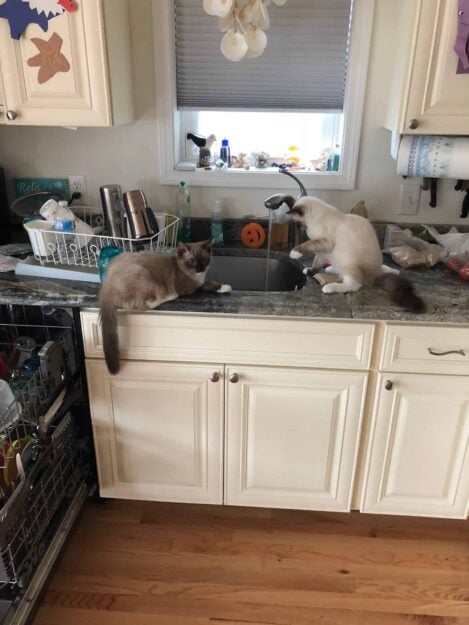 Jakku is always the first one to the “table” and he eats what he gets plus whatever his brother leaves behind. We are pleased with his voluntary vacuuming services when the kids drop crumbs while we are having dinner. He is growing exponentially and while his diet is regular, he is already almost 11 pounds at 7 months old! He is growing into a nice extra-large 20 pound fuzzball. 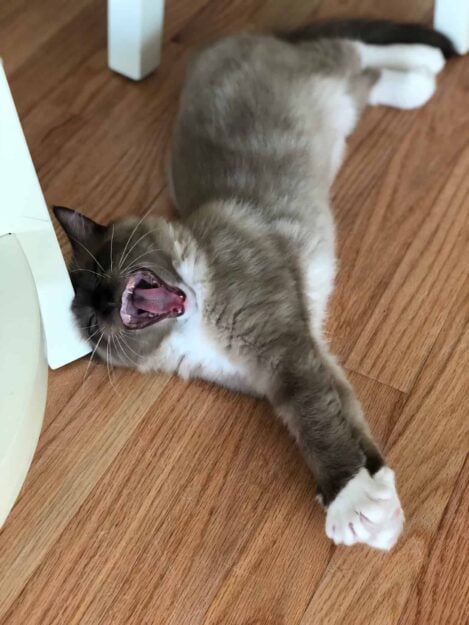 He is super active and loves to chase feathers on sticks and balls all over the house. Flies and other insects be warned, you won’t last more than a few minutes if you get into our house. Jakku will not quit until any flying or jumping insect meets its demise. 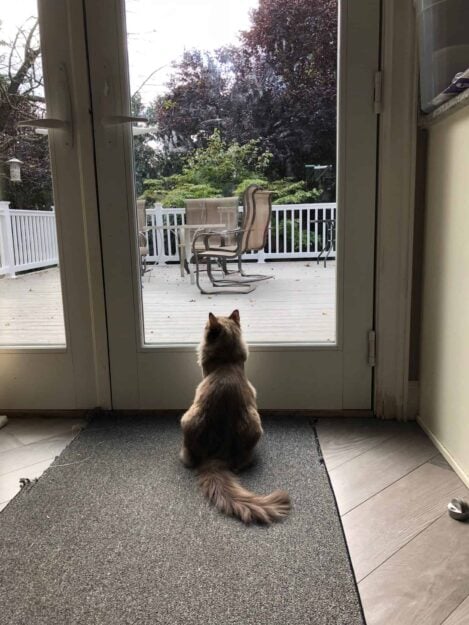