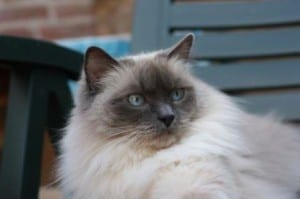 I want to introduce to you Chico, he is a 5 year old Blue point Ragdoll born at 14th of October 2007

This is his story.

It’s 25th of February 2009, I have to put down my lovely domestic cat Roos, she had kidney failure and was only 9 years old… 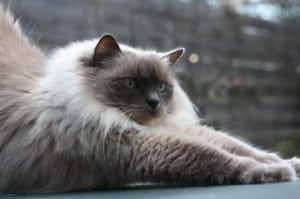 The same night I spoke on msn with a good friend of mine, she is a fine Ragdoll breeder and I know her well. She told me she had to find a new home for Chico, and she was sad about it, so I thought I have already Lisa here as a Ragdoll, and the sister of Roos was there too. But I don’t like male cats, I’m always afraid they will spray, but the breeder insured me he was not a sprayer, all her sold kittens are not spraying, so I was going to think it over, I knew him already..But it was too soon for me to have another cat in the house, so a month later Chico came to my house. The breeder was bringing him, and he was gorgeous, the other cats were interested, but fine, a little hissing here and there, but ok. Chico stayed on the couch maybe for a few days, he only came off to eat and going to the toilet.  And then he was exploring. He already has a friend(Lisa) and Minousch(domestic) was a little grumpy but she will tolerate him after 2 weeks, it is going great! They were all became fine friends, and together with Lisa he was playing and wrestling. All went fine. Three months later I got Vlinder(Butterfly) she also came from the same breeder, but only as a kitten. They all get along very well. And I enjoying every moment of them. 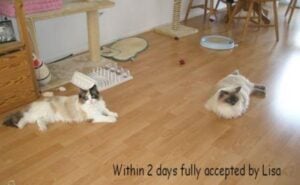 In January 2011 something happened to Chico, he was coughing, I thought it was a hairball, but he kept on coughing, and he was having trouble breathing, so I ran to the vet, she could not tell if was his heart or his lungs, so we rushed to a specialist for an ultrasound, and thank god it wasn’t his heart, but probably asthma or bronchitis, so I gave him some prednisone for a week, but he kept having trouble breathing. So I decide to use the inhalator, with human meds, and it worked fine, after a week his breathing was normal, and did not cough again. Many months later he was fine and I did’t have to use the medicine again, he was doing fine, and was wilder than he ever was. 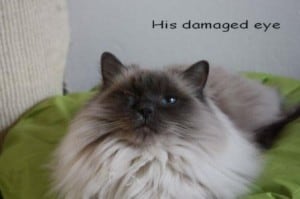 In November 2011 I saw that one of his eye are in tears, and red, it looks nasty, so I went to the vet again, and his eye was damaged, maybe because of playing with Kira (new kitten) a nail went into his eye. I get some crème to put in his eye, it takes him 2 months to recover from that. That was also the last time I went to the vet with him (except his shots) so he is a healthy boy at this moment.

Chico is a lovely boy who always wanted to be with you, Am I in the garden he is too, am I in the bathroom he follows me, and sits on his own place until I finish. He loves to play rough with Kira and Vlinder, and they can handle it, and he is gentle with Lisa(she is 9 years old), he gets along with all three cats, it is one big teddy bear, If I have visitors he runs to them meowing to get attention from them, and when they sit at the table, he lays down on it, and he won’t come down. Sometimes it is just like men he always wine about everything, but he would never use his claws. He loves kids, loves to play with them, and running with him with toys and stuff. 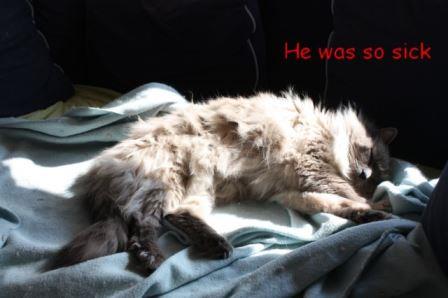 I am still very glad that I have taken him 4 years ago, He brought some light in the house.

I really love him with all my heart and I hope I will have him for many many many years with me. 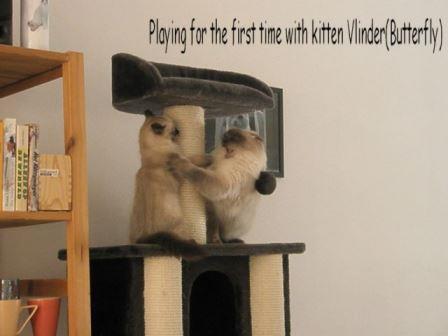 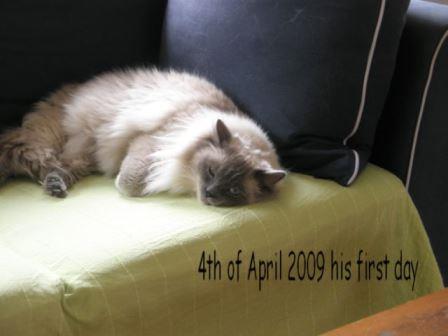 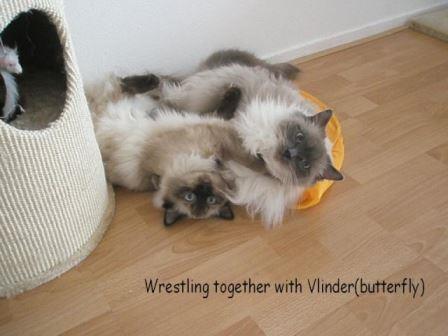