From a very young age, I have simply adored cats… I have so many cherished moments of my Domestic Shorthair Annie, staring up at me with her beautiful eyes, with her loud motor going.  And of course those freakishly cold winter nights, when she would curl up in bed and smooch for hours on end.

Sadly, in 2008 our joy was cut short, after a group of boys kicked Annie while she was sunning herself outside.  At the tender age of 18, the vet was limited in what he could do and the only humane thing to do was to put our princess to sleep.

After a year without my girl, I was introduced to an acquaintance’s Seal Bi-Colour Ragdoll and got an almighty tug at the heart strings! Before I knew it, my fiancé and I were looking throughout New Zealand for another baby and it wasn’t long until we stumbled across Keepin-Katz of New Zealand.   Of the breeders we enquired with, Alison and Roy were friendly, helpful and absolutely dedicated to their Ragdoll “kids.” 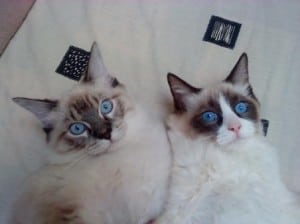 The tough decision then became which pattern would we like. No small feat given the beautiful array of Ragdoll patterns and colours out there!  In the end, we took home two beautiful fluffy bundles, Roman the Seal Bi-Colour (born 20/09/09) and Chiko the Seal Lynx Point with chocolate features (born 12/09/09).

They are very quiet, with Chiko being the more vocal of the two - he has a little meow for when he is stuck or in some sort of trouble, when he knows mummy's getting his dinner and when he is looking for me to get cuddles - he meows to let me know he wants me to pick him up and cuddle him, it is very sweet and he just purrs and purrs until he falls asleep in my arms. 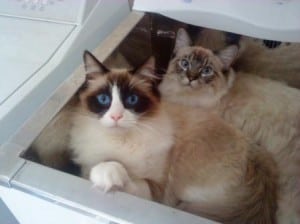 And our baby Roman loves to brush around our legs and look up at us lovingly with those huge deep sea blue eyes of his, he is SUCH an attention seeker and smooch. – Often found snuggling under the covers with one of us!

Although they are both boys, they love each other very much and cuddle each other all the time and hate being separated, even for a couple of seconds. They are a true testament to the Ragdoll breed displaying all associated characteristics, even the floppyness and this is all because of their pure lines, the time, care and effort their breeders.

We have had so much fun watching “the twins” and their antics, that we visited Keepin-Katz on Valentine’s Day 2010 and had a look at their latest litter. Although, I was initially after a girl to balance out the testosterone, Cupid had other plans for us and I fell head over heels in love with another little boy.  Whom, we have named Archer (“Ari” for short), representing our love for him that Valentine’s Day.  Though, he is also my “Little Bean” as he is still a baby compared to his brothers (born 17/01/10). 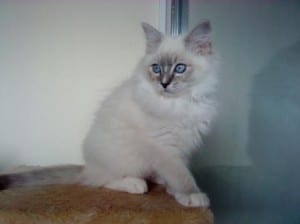 Little Ari is a gorgeous Blue Lynx Mitted with a blaze Ragdoll and is a beautiful boy inside and out – like his brothers, he just radiates love. His favourite position in the house is being glued to my side and he just stares and stares at me, with his little motor going. Ragdolls really are all about love!

If anyone would like to ask me about our boys, or see some of their antics, you can find us on YouTube under membership Raggy_Heaven. We love our boys very much and cannot recommend Ragdolls highly enough.