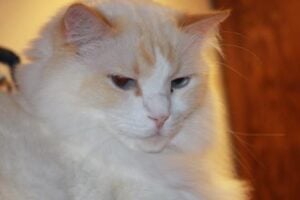 Wanting someone who would compliment my Flame Point Himalayan, I went on the internet and found a Flame Point Ragdoll kitten at the Lone Rock Cattery.  Blaze had enjoyed a wonderful kittenhood in surroundings that any cat would love to call home. The day I picked him up, I had to get him out of a palm tree.  There was every toy a cat or a person could imagine in a room that was so clean you could have sat down and had dinner.  The males and females were kept separate, with the new mothers having a room of their own.  It was obvious the breeder really cared about her cats--I even met Blaze's mother and dad, and had spent time playing with the kittens to get them use to humans.

Blaze loved everyone and everything.  I worried about someone stealing him, because everyone could pick him up and he had no fear of wondering into other people's apartments.  He has been found on sofas in strange apartments and one lady found him on her bed.  I've always said if he met a mouse he would invite it home to lunch. Blaze's love of animals did get him into trouble once. Before I got Smokey (an eight year old chocolate point Siamese) I met a lady who was trying to find homes for her Bangel cats as she had cancer and could no longer take care of them.  I feel in love with Tawny Rose, who had big green eyes and gorgeous dark stripes.  My plan was to bring her home and keep her in one room until she got use to the boys.  Blaze snuck in and started licking her on the head.  I think he scared her half to death.  At first, it was just verbal.  Every time she saw him she had a lot to say (he just looked shocked), but then one night she started beating him up--he never lifted a paw to her--a perfect gentleman, his mother had gone a good job teaching him that you don't hit girls.  The next day I took her back to her breeder--she got a good home with a one cat family, where she could be the queen.

I have been ill all summer with blood clots and Blaze has been my constant companion.  Flame and Smokey cared that I didn't feel good but mainly because I was laying on the couch where they would normally take their naps.  Blaze seemed to understand that I needed special attention and gave me as much love as I gave him.

On the morning of the 12th, he was fine. Ate his breakfast and tried to start a fight with Smokey. He loved to start fights, but was the biggest chicken, so the minute Smokey raised a paw to him, he was gone.  Was eyeing the teddy bear shelf--he liked to go up and sit with the bears, but if one happened to be sitting here he wanted to be, he'd just kick it off.  As some of the bears are valuable, I didn't care a lot for this idea, and a friend said to get a bottle and spray him with water.  It didn't work, he like water!

By afternoon he was vomiting, and when it didn't stop I took him to the vet. I'm sure the vet wondered why we were there as he was jumping from the exam table to the desk, purring so loud she couldn't listen to his heart and didn't make any fuss when she took his temperature.  We decided to take some blood tests just to be sure he was okay, and they found he had pancreatic.  The vet suggested bringing him in for iv treatment and antibiotics. He didn't respond to the treatment, and by Saturday the vet was saying we should do an x-ray to see if there was a tumor on the pancreas.  She didn't find a tumor, but she found a lot of fluid between the lungs and the ribs--a condition she considered very serious.  I asked if was going to die, and she sid maybe and it would be a slow painful death.  I couldn't do that to a guy I loved so much and who had given me so much love in return.  I picked up his ashes on Saturday and he is sitting on the shelf with the flag from my husband's funeral.

I want another Ragdoll.  Flame and Smokey (especially Smokey) are really trying to be a comfort, but just don't have the talent for knowing what I need like Blaze did.  I showed him the canister that contains Blaze's ashes, and I believe Smokey cried.  He laid down beside me and put his head on chest and made little sobbing noises.

If anyone has a Ragdoll that needs a loving home, I would like to hear about it.