Charlotte and Fletcher - Ragdolls of the Week 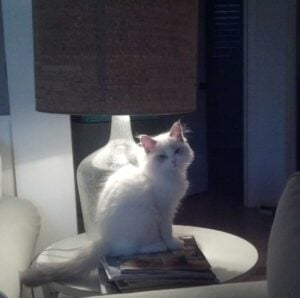 I'm up earlier than I want to be on a Sunday morning thanks to Fletcher, our 1 year old Ragdoll monster. He has a habit of reaching up into the shades of our bedside lamps, which causes them to rock and make enough noise that you're pretty sure they will fall off the table. I don't know if Fletcher is really all that intrigued by our bedside lamps, or if that is just his way of telling us he's tired of being awake by himself. The good thing about having been roused from bed ahead of schedule is that I am finally taking the time to write you about Fletcher and his big sister, Charlotte, a.k.a Sissy and Bud.

We were lucky to find Charlotte in 2012, after our only cat, Sophie, a.k.a Sister, passed away. We furiously searched rescue shelters and breeders hoping to fill our void with another gray baby girl cat wearing a white ascot. We drove up from Brunswick, Georgia, to Kannapolis, North Carolina, to get Charlotte from a Ragdoll breeder. Charlotte was in a pen with one of her brothers. Her brother seemed to be the adventurer of the two of them. As soon as we opened the pen, he was out and about, getting to know us, then falling fast asleep on my wife's lap. Charlotte stayed tucked away to herself on the other side of the pen. Charlotte stayed close to her carrier for the 5 hours plus ride home. Stephani, my wife, immediately started their bonding by riding with Charlotte in the backseat. When we made it home, Charlotte's safe spot was in the box springs of our bed. After trying to sleep that first night while being worried about our new baby, I woke up to find Stephani sleeping on the floor facing under the bed, and Charlotte was sleeping a few inches from her face. We now regret not taking Charlotte's brother home the same day we got her, because it might have made her transition easier, and she would have had company while we're at work. We had only been used to having 1 cat in the house, and we thought that cat preferred it that way. After spending some time with Charlotte and seeing how interested she seemed to be in the 3 outside cats we feed, we (my wife) thought 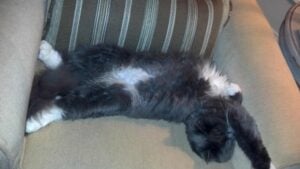 Charlotte would enjoy a baby sister or a baby brother in the house. I don't think anyone was prepared for "FLETCHER!", as his name is regularly said around our house.

We'd had Charlotte for over 2 years when we brought Fletcher home. We found Fletcher at a Ragdoll breeder in Daytona Beach, Florida. I don't know if you're familiar with the area, but NASCAR races and Bike Week are some of the big events in Daytona. I'm pretty sure Fletcher has some of these cultures racing through his blood. I think Fletcher tried to give us a fair warning when we were at the breeder's house that he was going to be a handful, because he was biting and wrestling some of the other cats in the room. He seemed to be the instigator. When we got Fletcher home, he was the complete 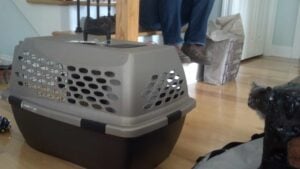 opposite of Charlotte as far as getting used to his new environment. We researched the best ways to try introduce Charlotte to Fletcher, but there were conflicting theories. Eventually, we took down the child gate that restrained Fletcher in hope they would figure out how to co-exist. Over a year later, we're still trying to figure out how to keep everyone happy. Regardless of size, Fletcher has never hesitated to pick on Charlotte. We think his picking is probably part kitten, part boy, part my wife (she loves to aggravate Fletcher with kisses), and part cat play. It is hard to tell when Charlotte is okay with playing vs. when she feels in danger. Her scream has actually set off the security alarm in our house. That is not easy to explain to central dispatch of 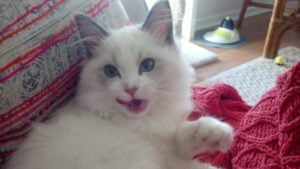 AlertTech. After saying all of this, we still think Charlotte is happy to have a brother in the house. We get excited when they manage to lay close to each other on the screen porch or stop to smell one another without coming to blows. It is hard to imagine our lives without both of them, so we hope they feel the same way about us and one another. 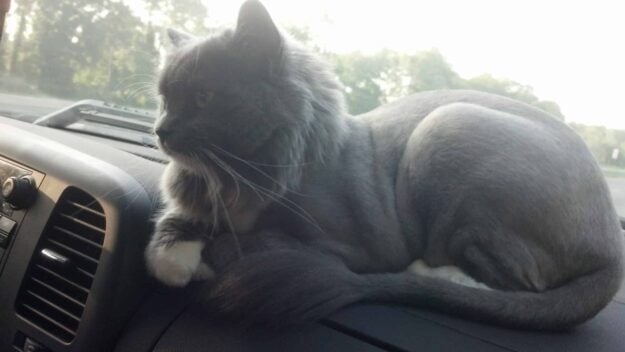 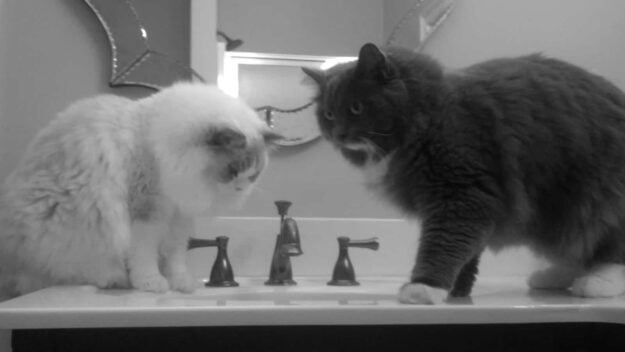