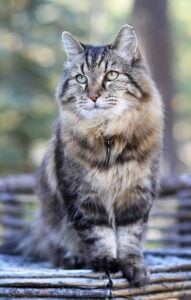 I saw Corduroy first on The Conscious Cat and when I found out that he was born in August 1989 like my Rags (the reason Floppycats.com exists), I became a little crazy about him. I can't even imagine how wondrous it would be to have Rags still around. So, I reached out to Corduroy's mom, Ashley, to see if she'd be game for an interview about Corduroy. Lucky for us - she was game!Corduroy was born and raised in Central Oregon, August 1st 1989. This cuddly domestic long hair is 1/2 Maine Coon and as a kitten, he was a grey fluff ball. Corduroy has maintained a beautifully soft coat of fur that gets fluffier in the winter months. His fur is useful when spending time outdoors, it cools off each night in the high desert of Oregon and his thick fur keeps him warm when hunting at night. Corduroy has his claws and he enjoys putting them to use when hunting, defending himself from possible predictors or simply kneading blankets before curling up. At an impressive age of 26 years and 300 days, Corduroy enjoys spending quality time with his humans and taking long walks outdoors.If you are in the Sisters, OR area - be sure to visit Corduroy's parents' new restaurant - Sisters Saloon & Ranch GrillDid you get Corduroy when he was a kitten? Did you adopt him from a shelter? A friend? 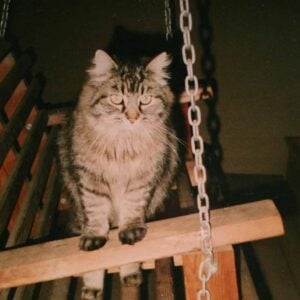 I picked him from a littler when I was 6 years old. I am now 34. My younger brother (Ryan, 5 years) and I wanted kittens so badly, as we were obsessed with the Siamese cats in Lady & The Tramp. There weren't any litters of Siamese available locally but our mom found a litter of 1/2 Maine Coon kittens advertised in the classified section of the town paper. Ryan and I picked out two fluffy kittens and named them Batman (died at 19) and Corduroy.Was Batman your brother's cat and Corduroy was yours? Did Batman and Corduroy stay together until Batman passed?Yes, Batman was my brother's cat and he was Corduroy's brother/littermate. Batman and Corduroy were good friends. They looked very similar, had nearly identical markings, except Batman's fur was slightly darker. Batman died at 19 in the family house.How did Corduroy get his name?When my brother and I picked up our kittens, Ryan was quick to name his kitty Batman. Batman had a black 'W' on his forehead and it reminded Ryan of Batman's mask. (Corduroy has the same marking.) I remember thinking Batman was such a cool name and I needed an equally, if not more "cool" name. My favorite childhood book was Corduroy by Dan Freeman. I enjoyed my mom reading it to me before bed, I thought Corduroy would be a good name. Fuzzy material for a fuzzy kitten.What do you attribute to Corduroy's longevity? Do you think it has to do with where you live? 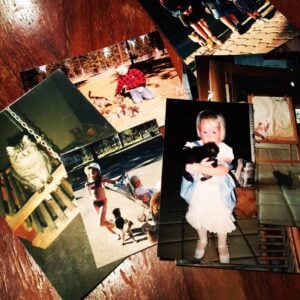 I attribute Corduroy's longevity to his having claws, they allow him to protect himself from possible predators. He is an indoor/outdoor cat, always has been, even when we lived in the city. Corduroy loves to go outside, to hunt and get exercise--I believe it is pertinent to his physical and mental health.I know you guys live in Oregon - have you always lived in Oregon? Do you live in the country or the city? (I am asking this for quality of life reasons).We are fortunate to live on acreage in Central Oregon. Corduroy is back living on the family ranch we inherited, in the house we were raised in. For the past four years, Corduroy traveled back and fourth with me to Salt Lake City, Utah. Corduroy prefers flying. Before Salt Lake, Corduroy also lived in Portland, Oregon when I attended Art School. Although we resided in the city, I let Corduroy out to roam whenever he asked (and I was going to be home or be back within an hour).At what point did your parents let you take him from your childhood home? 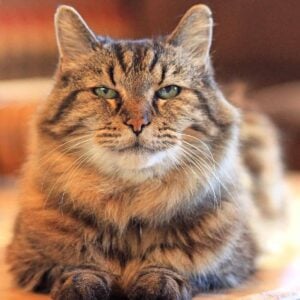 When I attended college in Portland....2003-2005, and again in 2006-2007. In 2011-2015 we lived in Salt Lake City.Has Corduroy had dentals?He still has all his teeth!I read that Corduroy weighs 7 lbs. Has he always weighed about that much?Corduroy now weighs 8 pounds. He use to weigh over 20 and was incredibly muscular. Corduroy is now an agile, tiny old man.Do you know if any of his siblings are alive?Not to my knowledge. Corduroy had a brother, his litter mate, Batman. We had him until he passed at 19.What is your favorite thing about Corduroy? (I am secretly crazy about his meow - the "brrr" roll of his tongue he does reminds me of Rags when he was older and melts my heart - like he does here)

It is hard to pinpoint what my favorite thing about Corduroy is, there are so many endearing qualities about him. I love his vocal announcement(s) that he is going to pounce, jump on the couch or bed or run up the stairs. Corduroy loves to be held and is such a sweet snuggler. I also enjoy how he scratches the surface he stands on multiple times, with both paws (one at a time) before drinking out of his designated cup of water.Do you have other pets? I think I saw in one of the videos that you have at least one more cat. Does he get along well with the other cats? Have you had cats that Corduroy has out lived? 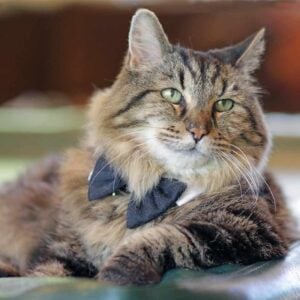 Corduroy is now an only child/pet. My husband (Aaron) and I watched Ryan and (Jen) his wife's two cats for a few months--it was entertaining. Our black lab (Rocco) is now 11 and lives with my 91 year old grandfather.Is Corduroy your favorite of your pets? Do you feel you have a special bond with him because you guys have been together for so long?Yes. There is no question Corduroy and I have a special bond, he is my little buddy.I am surprised by the amount of times people inquire on Instagram if he has his claws. They ask you in photos where you can clearly see his claws. Do you know why people ask that all the time?Often times, I don't know why people do the things they do... with that said, I like to think we are advocates for not declawing and it could be that people want clarification to #stopdeclawing ? 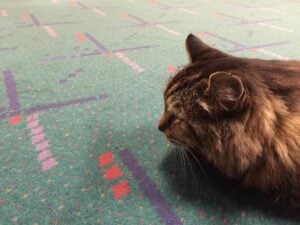 Corduroy in the Portland International Airport

How did you get involved in the Guinness Book of World Records? Did you seek it out or did someone encourage you to do so?I had just moved to Salt Lake City and a friend from Oregon was asking how the move went. I had described how Corduroy was dealing with the changes and my friend was shocked Corduroy was still alive and exclaimed that he has to be the oldest living cat. Corduroy was only 22 or 23 at the time. I ended up looking at guinnessworldrecords.com and saw Corduroy was older than the current record holder. It took me a year but I did apply. We were first accepted 07/19/2014 and again 07/06/2015.  [Editor Note: This May 2016, a 30-year old Siamese named Scooter took the title of the "World's Oldest Living Cat" from Corduroy. Unfortunately, Scooter recently passed away, so Corduroy has reclaimed the title again.  Ashley believes Guinness World Records will go with the date of Corduroy's last vet appointment which was 5/26/16. She'll be posting photos of Cord and the certificate when it arrives. ]Are you glad Corduroy ended up in the Guiness Book of World Records? Did it bring you guys any opportunities that you weren't expecting? 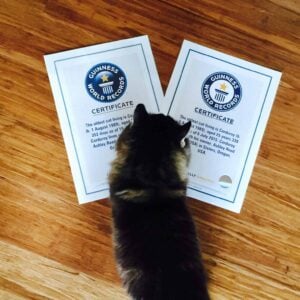 Corduroy with his first two certificates

We are truly fortunate to have Corduroy in our lives and I am honored Guinness World Records acknowledged him and people show an interest in Corduroy. It is fun for me to be able to share him with followers from all around the world via social media. I am pleasantly surprised Corduroy has over 17.3 thousand followers on Instagram and hundreds of people watch him on Snapchat. Corduroy has been featured in many news articles, published in papers and magazines and has been interviewed via me, his human, on Huffpost online and a few radio stations. The one interview that sticks out most in my memory was the last interview we did for BBC. The interview took place at midnight PCT and I was incredibly sleep deprived and not very eloquent. I had a hard time understanding the gentleman calling from London, he spoke very quickly and had obviously had his morning coffee. Corduroy was following me around the house as I walked from room to room talking on the phone for the short interview. I wish he had been as vocal as he was when I hung up the phone because they could have heard him!Have people contacted you asking you if they can meet Corduroy?People have sent me messages and comments. I have thought about having a meet and greet, possibly at our local vet or maybe we will get invited to Catcon.I know you have answered this question on Instagram, but would you mind sharing with the readers what Corduroy ate the majority of his life and also what he eats now?I have had Corduroy on a low protein diet for the last three years per our Vet's recommendation. Hill's Prescription Diet k/d renal health; both dry food and canned pate and stews. Before his special diet, he was on a high protein based diet, I think Savage cat food does a great job. Corduroy mostly ate a dry food and whatever he caught outside.Something I love about Corduroy's Instagram are the famous quotes you do to go along with Corduroy's antics or the sweet things you do. Do you love quotes? Or what made you start doing that?I started doing quotes that corresponded with Corduroy's photos because he looks wise and he is ancient. I thought per photo, what possible words of wisdom would Corduroy have to offer? It was legacy driven.

I noticed you posted a video about the Roomba 880. Do you still like it?I purchased the Roomba 880 with the intention it would clean up the litter that trails out of Corduroy's litter box. Unfortunately, the Roomba doesn't do as well on hard surfaces as it does on carpets, it cleans carpets incredibly well and for that, I really like it. A couple days ago I emptied the trap (immediately after use) and noticed it collected a spider that was still alive. Awesome.Follow Corduroy on the following social media channels: