Back in March, I did an interview with a vet, Sarah Brandon, DVM who co-runs Canna Companion. Before that interview, I had been emailing with a reader, Teresa, who was having a hard time with her kitty, Mariposa. She wondered if I could think of anything that might help Mariposa and Canna Companion came to mind. So I suggested Teresa reach out to Sarah about Mariposa's situation and go from there. Here's Mariposa's story/journey.

During a snowstorm 13 years ago, a young, declawed, Maine Coon found her way to our back porch. Of course we adopted her. We named her Mariposa (Spanish for butterfly) (Mari) because of her love for chasing butterflies.

Mari has always had lot of anxiety that resulted in several bouts of interstitial cystitis (IC) that were treated with medications and resolved quickly. However, last November, her stress from being boarded for a week resulted in an episode of hematuria (blood in her urine) that seemed to set off her IC all over again. This time, she wasn't able to recover. Even with medications, she was in such pain she would sit in a crouched position, never able to relax and would even cry out at times. Even her appetite was waning because she was feeling so rough. She lost down from her usual 12 pounds to 11.2 pounds. She would go to her box and have normal urine, but then would return within a five-minute period. Instead of the normal urine, it turned into bloody, clotted blood. When it got to that point, she would have to keep returning over and over again to the box, crying and dripping a bloody trail even as she was walking. Also, one precursor I've grown to recognize when these episodes occur, is that she will begin to lick excessively, so I would try to give her medications to prevent it from going any further. That worked at first but she began to have the episodes almost daily and the nightmare began. 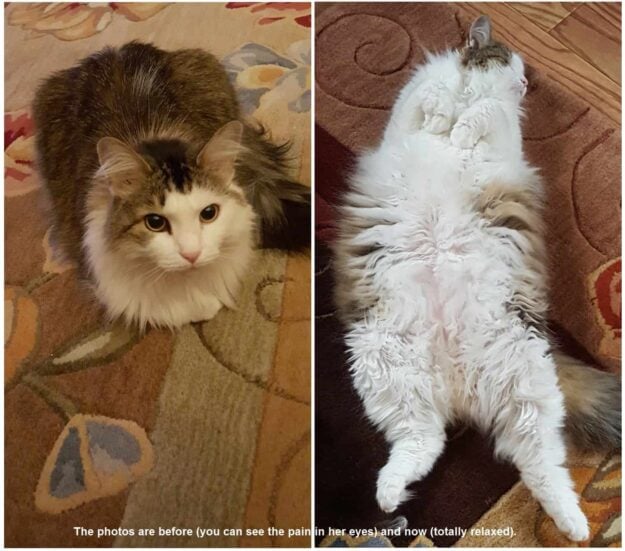 One weekend, Mari had such a severe exacerbation of her symptoms and was in such horrible pain, we took her to the Emergency Vet. There they did all the diagnostics, abdominal ultrasound, x-rays, and lab work, to rule out any other causes. All labs came back normal except what we had already known about. She has renal insufficiency (early stage renal failure) that was ID'd several months prior. She was sent home with a narcotic, Buprenex, that helped stop the bladder spasms when she was having an episode of IC. It was the only thing that relieved her suffering. This is a medication that is only for very severe episodes to relieve the spasms and her pain, but did not treat the cause or stop them from occurring.

Mari was started on these medications in November 2015: amitriptylline (an antidepressant) to calm her and relieve bladder spasms, Benazepril for her renal insufficiency, and the Buprenex (a narcotic) for the extreme exacerbations of the IC. Instead of improving, her condition kept deteriorating. The IC episodes became more severe and frequent occurring almost every day. One baby aspirin, 81 mg., every three days was added. She had a lot of anxiety, and would begin showing signs of stress by pacing and crouching with excessive licking. Then the hematuria would erupt again even before the aspirin was due on the third day. As a last resort, we would have to give her the Buprenex.
We also tried alternative therapies such as distraction, music, herbal calming meds, and Feliway plugins. NOTHING was working.

NOTHING! Our entire family was effected because we were worried about her. Mari became more and more aggressive because she was in such terrible pain.

In desperation for something to help Mari, I reached out to Jenny to see if she knew anything that could help Mari. She immediately responded and asked if we had considered trying cannabis (hemp) and recommended Canna Companion.

I immediately began reading and researching the use of hemp in cats with IC and the Canna Companion Company. Have to admit, I was very skeptical in the beginning that it would work, but we already exhausted almost every other option. Mari was suffering terribly, so I was more than willing to give it a try. Dr. Sarah Brandon, the co-founder of Canna Companion, generously spent a lot of time consulting with us and even mapped out a very specific treatment plan. Mari began her treatment on their regular dosage for cats. Since she was having such terrible physical pain and emotional anxiety, she began taking one pill twice a day. The capsules are very small and really easy to administer.

After being on it for a week, Mari seemed to be calming down and the excessive licking ceased. Because Canna Companion is a derrivative of hemp, it does not contain anything that would make her "high," but she still receives the calming effect. The formulation also contains Omega 3 & 6 fatty acids as well as Vitamin B6. Mari's anxiety seemed to improve every week until she was no longer having those awful bladder spasms and bloody urine from the IC. Also, being able to relax, she began to eat and enjoy her life again.

Currently, Mariposa has been on Canna Companion for 3 months since the last part of February 2016. We are happy to report that Mari has not had even one exacerbation of the IC symptoms since beginning Canna Companion's treatment plan. NOT ONE! Just a little over a month ago, she was able to be completely taken off aspirin! She is eating well and gained almost 2 pounds.

We are so thankful to Dr. Brandon for all the time and effort she put into helping Mariposa and to Jenny for sharing this valuable information with us. Without the Canna Companion, I don't know what would have happened to Mari. She was losing ground every week and it was a very stressful and sad situation. Honestly have to say that the positive results from Canna Companion are a blessing to not only Mari, but to our entire family. Just the other night, Mari was lying on her back with all four feet in the air. Wonderful to see her so relaxed and happy! Thanks to Canna Companion and Dr. Brandon, Mariposa is able to enjoy her life once again. ♥♥♥♥♥