My sister-in-law approached my family one day and told us that her mom was looking to rehome a six-month-old ragdoll kitten she couldn’t keep because her cats were constantly bullying him. It had gotten to the point where he wouldn’t even eat. 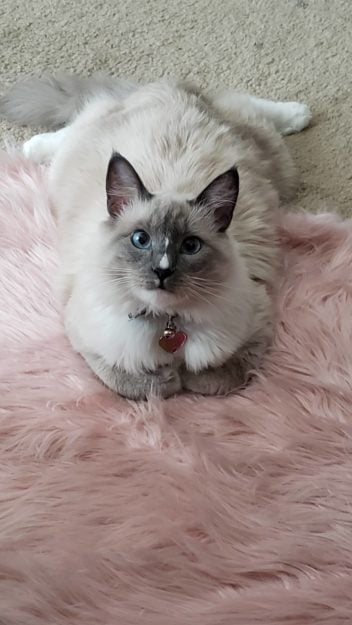 I have a soft spot for rescuing animals, especially cats, and when the opportunity arose, I usually wouldn’t have hesitated, but my herd of felines was already a whopping size of nine. After some contemplation, my family and I decided to take him in any way to help them out.

I came home from work after my brother had picked him up and went into the room, we were keeping him in. My heart absolutely melted when I saw that tiny baby’s face for the first time. He immediately crawled into the crook of my neck and purred. From day one, he was the sweetest thing, and to be ironic–considering the personality–I gave him the name Genghis Khan. 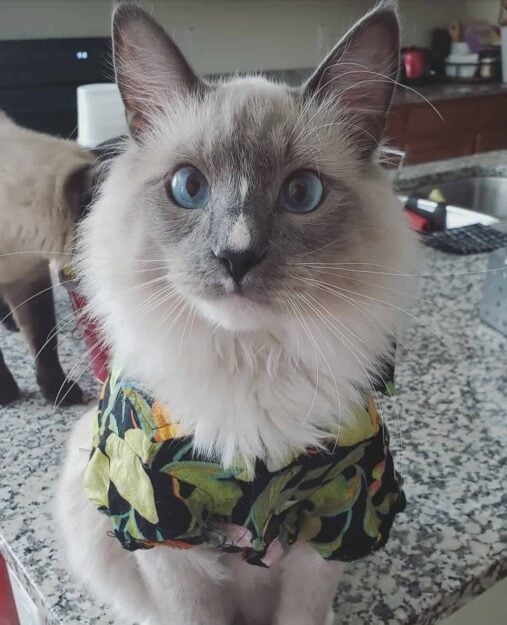 A major issue we had with Genghis, however, was that he’d shiver at random until someone scooped him up and held him. I figured it was because he was just traumatized with fear after enduring all of that torment. Though I hadn’t thought it’d be much of a solution, I looked for a blue striped sweater I’d bought in the past for another cat of mine and put it on him to see if it would help him adjust. The little guy didn’t mind wearing it one bit. In fact, I think it became a sense of security for him in what he considered a scary, new environment. 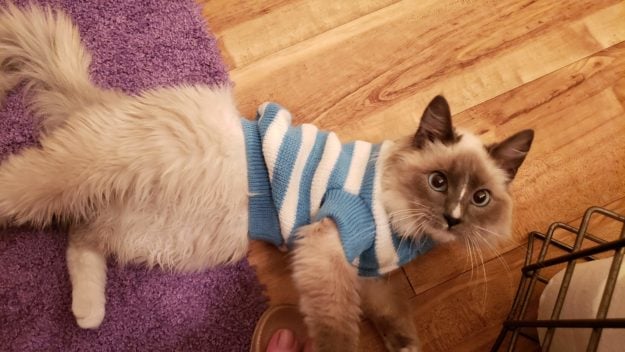 Whenever he wore it, he would stop shaking, and soon enough, he broke out of his shell. He completely transformed into this rambunctious, spit-fire kitten with a crazy amount of energy. Slowly but surely as I started to introduce him to the rest of the house, he warmed up to everyone and everything. 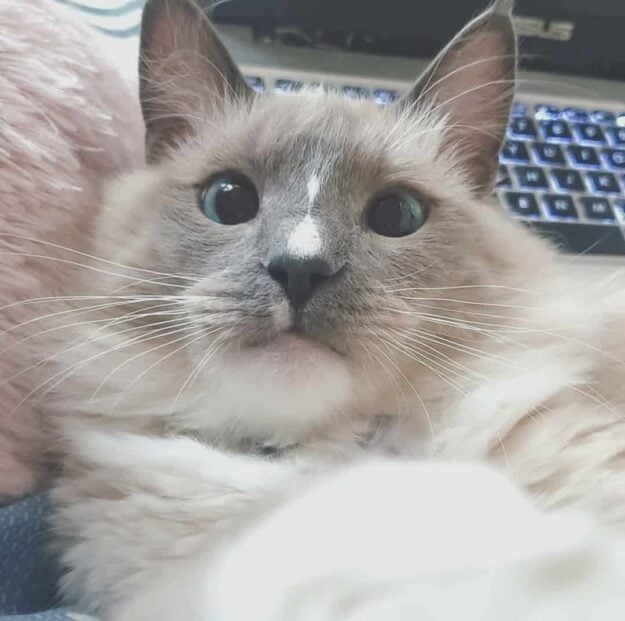 It took two months to completely get him used to my other cats, at least enough that he wouldn’t run and hide at the sight of them. My other cats are much older and don’t like to play, so they were constantly annoyed with his friskiness. My family made up for that by making sure we were his playmates instead. 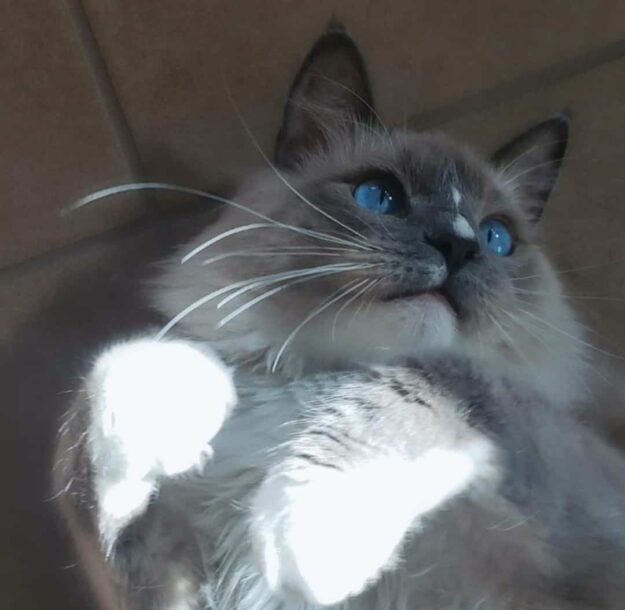 Right before he was a year old, he started to display another change of behavior that worried us. Genghis tries to act dominant towards my other cats since he grew larger than most of them. He puffs himself up and gets this intense look in his eye as he slowly backs them into a corner or makes them run into a cabinet. They hiss and growl at him, but he won’t let up. It’s a relief that he doesn’t swat at them or engage in any physical fighting. I believe he just tries to assert his role in the group.

This was definitely a drastic shift from the frightened kitten we had been given, though. I guess, he truly did grow into his name after all. We’ve attempted to remedy his bad habit by removing him from the situation whenever it happens and giving him a time out in a separate room. Unfortunately, he still acts like he’s the leader of the house even if his light meow and delicate appearance says otherwise. 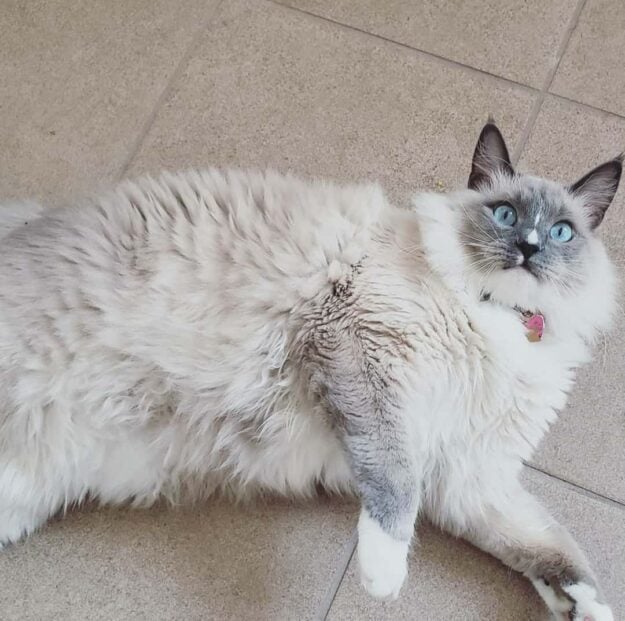 I’ve grown deathly attached to him since we don’t own many boys, and he’s a big sucker for affection. He’ll scratch at my bedroom door when he’s looking for a petting session and follows me around the house like my own personal pest. We’ve recently rescued an abandoned kitten named Cheddar who’s twice as feisty and curious, and Genghis has actually helped tremendously in his development by basically adopting him as his own baby. They take out their energy on each other by play wrestling, and wherever Genghis goes, little Cheddar is sure to be there too. 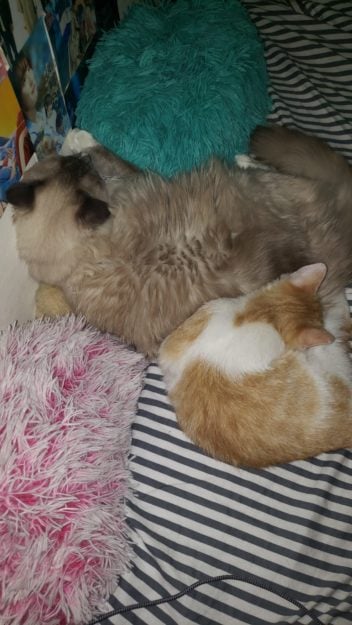 Genghis just turned two and has become a bit more docile with age. Nowadays, he spends most of his time sleeping when he isn’t babysitting his “son”. Don’t underestimate him, though! When he’s bored and being ignored, he’ll surely channel his bratty side to get your attention. 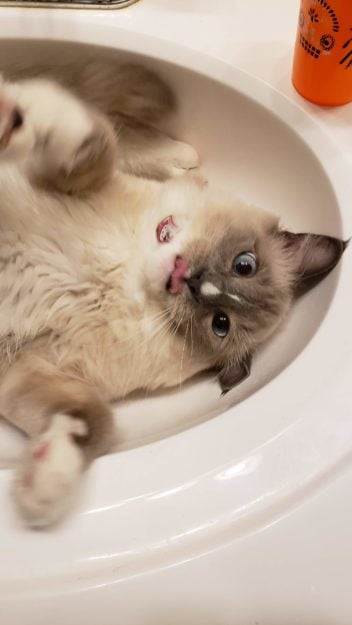 Even if he causes the biggest mess or gets on all my nerves, Genghis Khan is a blessing. Despite my initial doubt about taking him in, I’m glad he became a part of our family because he’s improved all of our lives in the process and taught me how to love much more than I ever thought was possible.