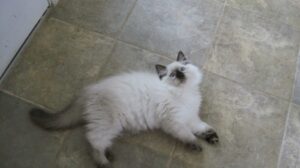 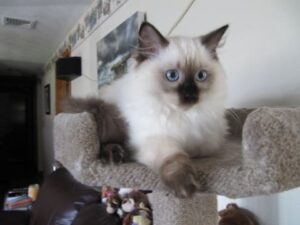 We were contacted by the breeder of one of our other Ragdolls (Judy of Judysrags.com in CT)  to watch Animal Planets too cute coming on TV soon as our Ragdoll’s mother was featured on this episode. We watched it and of course I go the “oh I want another kitten” syndrome.  I contacted the breeder and she said she had a seal mitted male ready to go in May of 2012.  She sent pictures and of course it was all over, we were going to get our little Bruin.  Named, “Bruin” after our hockey team the Boston Bruins.  Also the name fit in well with his brothers, Salem, Logan and my parents’ Ragdoll Boston.   We 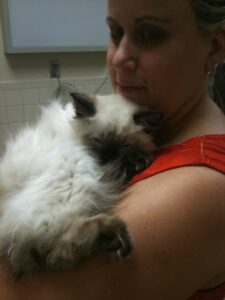 fell in love with the ragdoll breed almost 9 years ago when our beloved Tabby Alex passed away from cancer and we wanted to get another cat.  We did a lot of research and settled on a ragdoll.  We couldn’t have been more happy with our first one Salem a blue mitted boy.  We got our second ragdoll Logan,  also from Judy, and also a blue mitted male shortly after my husband had a stroke in 2009.   Logan and my husband are so bonded, I have never seen anything like it.   It is such good therapy.

We were going on our first real vacation since my husband’s stroke and had settled on a pickup date of our little Boo (our nickname for Bruin) the Sunday after we returned.   I went and met the breeder and instantly fell in love with this gorgeous boy.  He sat on my lap all the way home 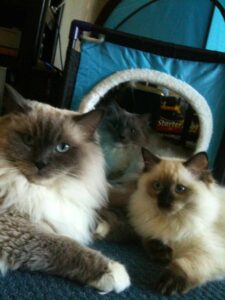 and just purred.   My husband fell in love too as soon as he saw him. This was May 27th.

Little Bruin fit right in with his big brothers, they all instantly got along.  Things were all good in the Hill household.

On Monday June 11th , I came home from work to find Bruin crumpled in the corner doing circles.   I immediately got him to our vet who diagnosed him with a severe ear infection and gave him antibiotics.  He seemed to instantly turn around and by Friday was back to himself.  On Saturday he had a recheck with the vet and he just seemed to be off. Our vet said it could just be the antibiotics.    Later that day he started to do the circles again and falling over and meowing loudly.   I knew something was wrong.  We rushed back to the vet who did some basic tests to rule out some things.   He was not getting better and we were not getting answers.   We were referred to the Tufts 24-hour medical facility.   We hurried over there after picking up Logan from the groomer and quickly dropping him off at home.   They got us right in and got Bruin on fluids and gave him some steroids.    The doctor came in and told us that the steroids seemed to perk him up a bit, but they still didn’t have an answer.  In addition, that location of Tufts did not have a neurology department, so we would 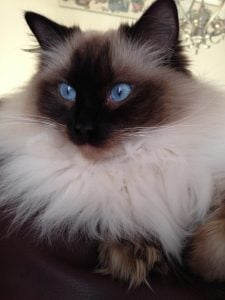 have to go to another facility about ½ hour away.   So we packed him back up and raced up there.   They took him in immediately as well and to our luck , the on-call neurologist was just leaving for the day and stayed to review his case.  They took him out back, bundled in a blanket and I looked at my husband and we both thought for sure this was the last we would see of him, he was so sick.

The neurologist came out a bit later and said they were giving him antibiotics and watching him and that they really couldn’t do anything until Monday. This was Saturday. She told us to go home and call in the morning.  I was so scared.

To our happiness when we called the next day they said he had perked up again and was meowing. We went back to see him and just held him for hours.   As we were leaving I turned and his little paw grabbed the back of my shirt as to say “don’t leave mom”.  We were informed that they would do an MRI the next day to get to the bottom of the problem.

Monday arrived and the MRI was done and we had answers.  He had an inner ear Polyp (rare for kittens) that was growing into his brain and had caused severe encephalitis.  He had to have immediate surgery to have it removed.  We were informed of all the complications and told them to go for it. 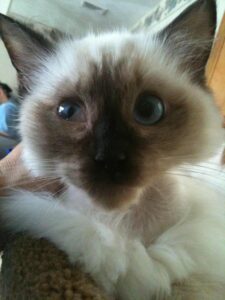 I got a call a few hours later and he was out of surgery and doing well.  I was able to go see him that night after work. He was groggy and had the eye complication where the third eyelid partially covered his eye known as  Horner’s syndrome.  We were told that this may or may not go away.  We didn’t care as long as we had our loving little boy happy and healthy.

Bruin had to stay in ICU for the rest of the week to make sure the brain infection cleared up.  I went and visited daily and he improved each day.  All the staff fought over him and they told me he was never in his cage and always curled up in someone’s arm or a lap.   They adored him.

By Friday he was ready to come home,  a bit off balance but recovering nicely.  He was sent home with the cone of shame and for a kitten it’s even worse.  He kept head planting due to the weight of it. 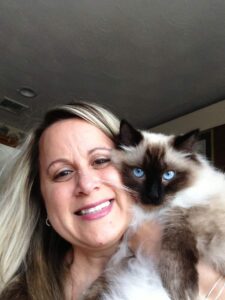 We had to go back every other Friday for checkups with neurology and he was on antibiotics for over 2 months to make sure everything was cleared up.   He developed a yeast infection in his ear and had to have drops for that but otherwise had a smooth recovery.

The Horner’s syndrome cleared up and he has a slight head tilt to this day. It’s so him though.    At some points his pupils are different sizes which is also an after effect.  This is not all the time though.

We call him the $6,000 kitty but well worth every penny.  He has established himself as the goofball of the family as well as Mr. Vocal.  He loves his food and all his toys.   We say that Bruin says, “What’s mine is mine and what’s yours is mine.” He thinks all toys are his.   His favorite 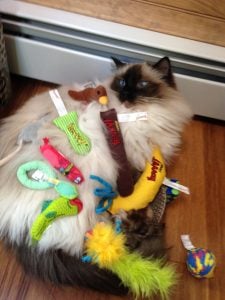 toys are Rosie the rat and the Petstages Snuggle and Scratch.  He is always on that surrounded by his favorite things.

Just last week  April 9, 2015 Bruin started  scratching his ear and I immediately got him to the vet. They aren’t sure currently as the ear canal is very infected and swollen, but they think the polyp may have come back.   He is getting drops now to take care of the infection and we will see in two weeks whether another MRI and surgery are in his future.

We love our Ragdolls beyond words, but this crazy seal boy holds a special place in our hearts for all he had to deal with.  We love you Bruin. 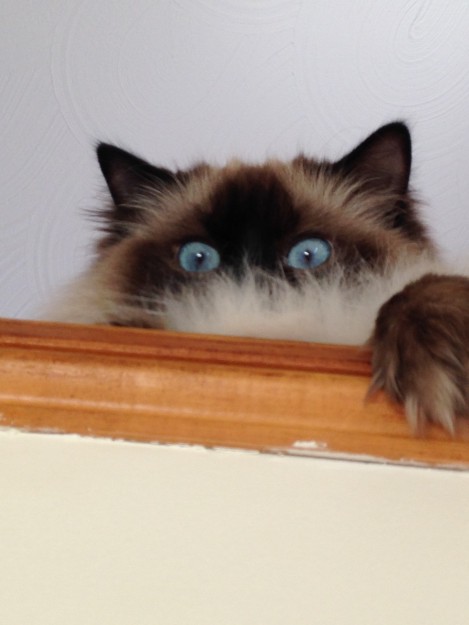 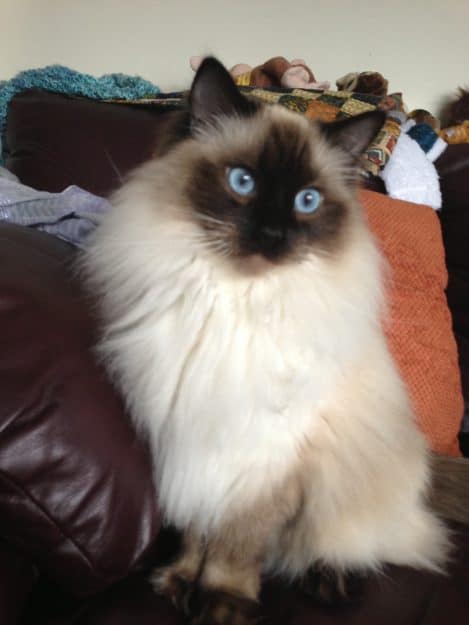 7 thoughts on “Bruin – Ragdoll of the Week”