Artemis and his two brothers, Adam and Binkley, came to us in July 2007.

My husband and I had just lost both of our cats within 24 hours of each other. His nine-year old tuxedo cat, Opus, fell into a severe diabetic shock and had to be put down. When we came home after that ordeal, I noticed that my 20-year old tuxedo cat, Sheba – who was deaf and blind already – had a stroke and was suffering a lot. We put her down 24 hours after we lost Opus.

We were really heartbroken! A friend from work found out about our tragedy and said that her mom had three Ragdoll kittens that they needed to find homes for. They were the full litter, all boys, born on April 2, and their mom was pregnant again. She said we could take two if we didn't want three, but my husband said that we should take all three, so we did. Artemis is the alpha cat and is a big boy at 17 pounds! He was named after Artemis Gordon from the TV show “Wild, Wild West.” He doesn’t move much, but when he does, momentum carries him. He is like a runaway train! Adam was named after Adam Savage on Mythbusters. When we got him, he climbed the highest, ran the farthest and destroyed the most stuff in the first 24 hours than the other two. Plus, being a flame point, he looked like Adam Savage as well.

Binkley was named after Mike Binkley, a cartoon character in “Bloom County”. He was very quiet and shy and tiny. Later we found out that the reason for these qualities was that he was sick with kennel cough. Once he got medicine, he grew up and developed quite a personality. 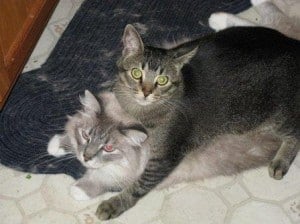 We adopted a younger brown tabby cat, Fidget, from a friend that needed to find a home for her cats after she got evicted. All four get along great and all play together happily. Crinkle balls, foam golf balls and catnip mousies are the toys of choice and they like Greenies for treats. Since they are all sizeable cats, we mix Science Diet Sensitive Stomach food (Adam has a sensitive tummy) with the Science Diet Light food to keep their weight somewhat in check. Artemis is a big snuggle bug and flops down in front of anyone to get his tummy rubbed. Adam likes bonking you in the face with his head to get attention. Binkley likes to lie on your legs when you are sitting in the recliner with a blankie on your lap. Fidget has taken the cue from Artemis and also lies down on the floor to get his tummy rubbed. The problem is that he is the same color as the rugs and he gets stepped on occasionally. Artemis, Adam and Binkley as Kittens

All four of our cats LOVE paper bags. They can hide in them or sleep on them, depending on their mood and they make noise! We tried to get a dog, but the cats wouldn’t have it. “No Bark-Barks!” is their motto.