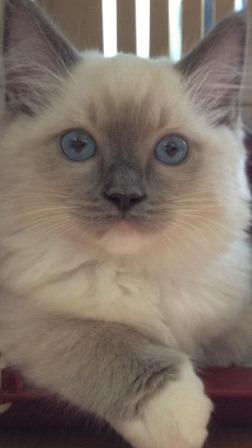 This is our kitten Blue, she is now 18 weeks old. This photo was taken the day we brought her home so she is 13 weeks.

The reason we got a Ragdoll is this: My husband is called Simon Tofield, a lot of people (especially from the States) think he is Simon Tofield of "Simon's Cat" fame. He is the guy who has put loads of animated videos on YouTube, written books and calendars and now has commissioned plush toys etc.  My Simon is not the same Simon (Although he only lives 15 miles from us, is the same age and obviously has cats)... Lots of people be-friended Si on Facebook thinking he was "Simon's Cat" and were sending him pictures of these beautiful cats with amazing eyes!!!! We just had to search the Internet to find the breed, we were in awe of these stunning cats. At first we thought they were only bred in the USA, but after lots of searching we found some breeders in the UK, and one that was only 25 miles away from us. I immediately phoned them and they had just had a litter of 4, (2 boys and 2 girls) we wanted a female as we already have a girl. Unfortunately one of the males died not long after birth, however the other three were healthy. This was in April, but he didn't know if the girls were going to be breeders, after a two month wait he contacted us and said we could have Blue, and sent pictures (You can imagine, we fell in love with her straight away) 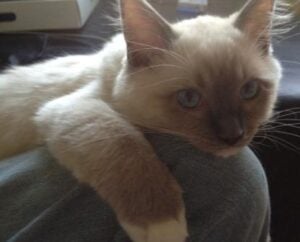 Here in the UK, non pedigree cats are sent to new homes at 6 - 8 weeks, we didn't know pedigree kittens could not be homed until they were at least 13 weeks - The longest 5 weeks of my life!!!!

We have called her HullaBaloo because she is like a whirl-wind when she plays and runs about and Blue for short....

We have a YouTube account called MizzyandBlue.. the first one - where our 6 year old cat (not a Ragdoll) sees Blue is hilarious, as soon as she spots Blue she leaves a trail of dust behind her....how can anything be scared of this gorgeous little thing????  Blue does not like apples as the second video shows, it's a little shaky as our 11 year old daughter is laughing so much while filming!! 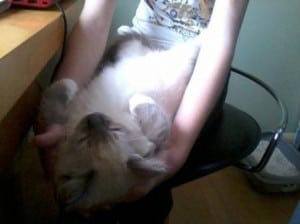 Blue chillin' with Ciara, our daughter

The breeder we got Blue from is called Stefan Ridzon, and his website is Ladydollcats, Blue's mum is called Happiness Sanchia and her dad is Elvis (how cool is that?)

Here is Blue relaxing after a hard half hours play.

I didn't realise Ragdolls would be so naughty.... She chews wires, climbs curtains, eats the newspaper, climbs over everything, runs away with earplugs, pens, pencils and stylus's,  but as soon as you stroke her and she flops down next to you and then looks at you with those big blue eyes and you forgive them anything 🙂 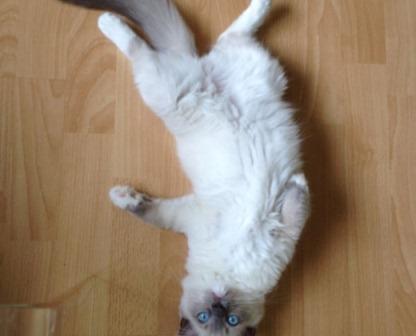