I would like to tell you a very special story about a very special Ragdoll mix boy, MacGrumpy. MacGrumpy , who is declawed, was found outside in Dallas with his coat matted to his skin and frightened out of his mind. He had obviously been abused, and he is still terrified of mops and brooms (really anything that could have been used to swat or hit him).  I became involved when he was about to be euthanized because he was deemed “aggressive” and unadoptable at a local kill shelter. It took us nearly thirty minutes to get him out of the cage at the shelter, because he was attacking us as we were trying to get him out. I finally told him that he had one more chance or I was leaving him. We finally got him in the carrier, and I brought him home with me. 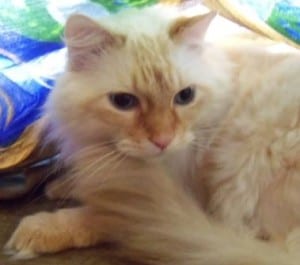 Two weeks later, I was dealing with multiple bite wounds (I was even wearing long-sleeved shirts in 100 degree weather to keep anyone from seeing my arms), because he was still attacking me. I was unable to groom him even slightly and was concerned that he was dealing with hot spots because he was so matted. Finally, in desperation, I reached out to our Facebook readers and Floppycats fans for funds to have him knocked out and groomed. He came home clean but with horrible hot spots and still angry at the world. Abused and terrified, MacGrumpy was not going to be an easy cat to place, and to say I despaired of his adoptability was an understatement. 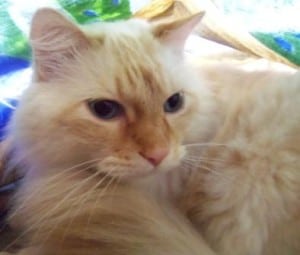 The one thing MacGrumpy liked was canned food. I finally discovered that if I held the bowl with the canned food, he would finally eat from the bowl while I was holding it. Then, he would eat from the bowl and let me pet him; eventually, he would let me pet him. Finally, a couple of weeks later, MacGrumpy graduated from the two story cat condo to the guest room.  He went from sleeping under the daybed and growling at me to sleeping on the daybed. One day, he let me lay down on the bed with him while we took a nap; I woke with him sleeping propped up against me.  That was the beginning of MacGrumpy’s complete transformation. He now jumps up and gives kisses; he allows me to pick him up and hold him for hugs; he naps with me when I have the time for a nap. He still gives the occasional swat, but our MacGrumpy has transformed from MacGrumpy to just Mac. I call that a MacMiracle, and our precious boy is going to an awesome (and lucky) previous adopter on January 14. I know you will wish him well in his new home. 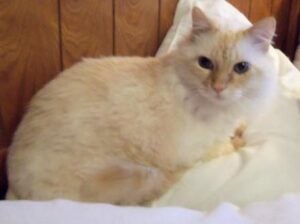