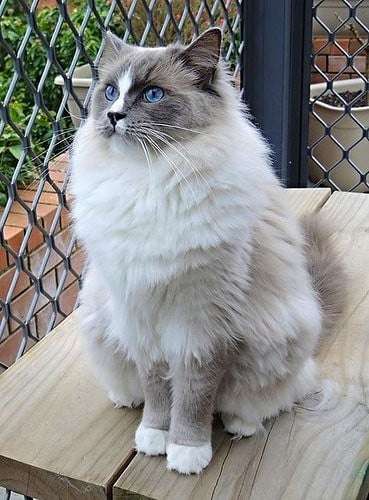 Three Months after bringing Shadow home our ragdoll Tigga passed away suddenly at the age of 4. Shadow was devastated So rang Shadow’s breeder to see if she had another baby available. She had a litter nearly ready so we went to choose a new playmate. We walked in and the babies were asking for cuddles. Saw this tiny blue mitted boy with a hour glass blaze and I picked him up and he snuggled in and gave me a wash I instantly fell in love. 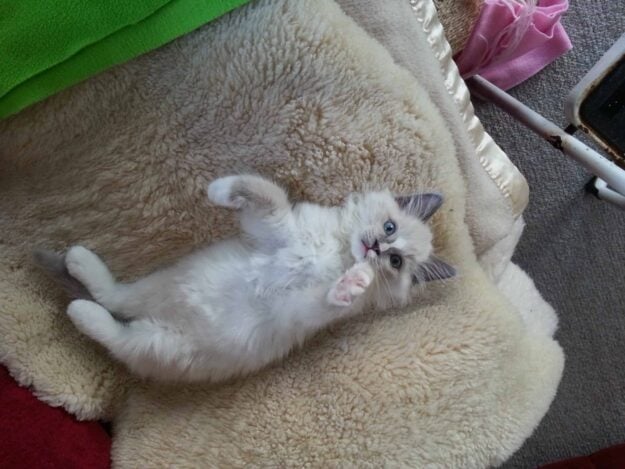 Paid my deposit then had to wait 3 long weeks to bring him home. 17th April 2013 Kiwimagic Devine Star aka Zimba arrived in our home. Within half an hour the half brothers (have same father) were fast asleep together in the cat bed and have been together ever since. 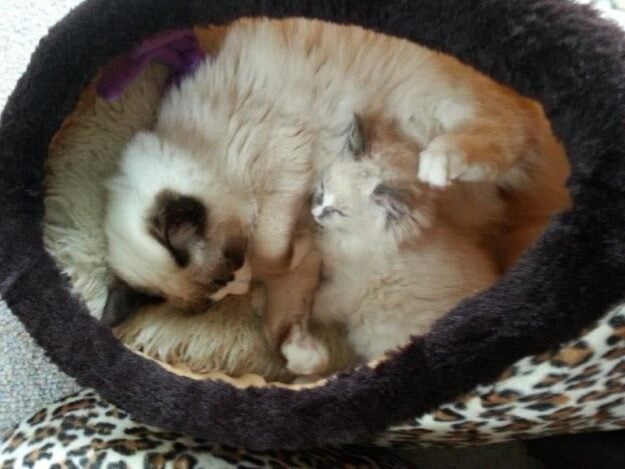 He very quickly settled in made himself at home and keeps us entertained. Every night while all three cats were asleep on the couch he would start off sleeping next to Shadow then slowly inch his way over until he was lying next to our Persian girl Smudge. He was determined to be friends and it didn’t take long for him to win her affection and let him lie next to her. When we moved here in the retirement village 3 years ago we built an enclosure for them off our bedroom patio and had a dog door installed leading into the enclosure. 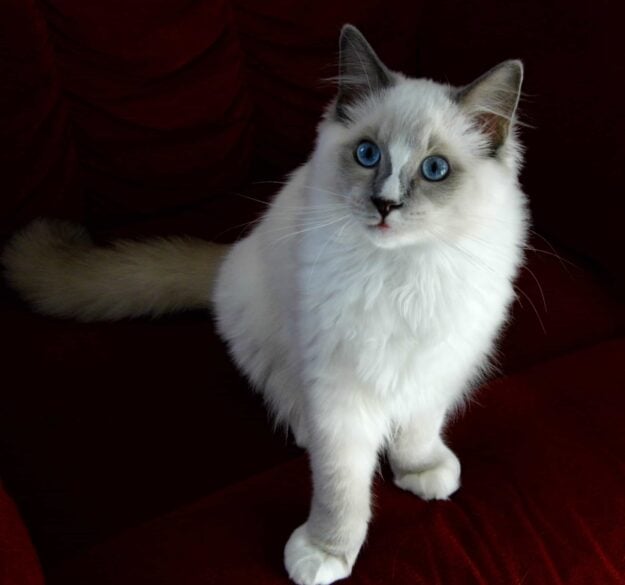 Poor Shadow was sitting in front of it very gingerly pushing the door open trying to pluck up courage to go thru when Zimba came racing down the hallway into the bedroom and ran straight into Shadow pushing him thru the door into the enclosure.

Our pictures on the wall were always crooked frustrated me then I caught Zimba playing with his portrait. 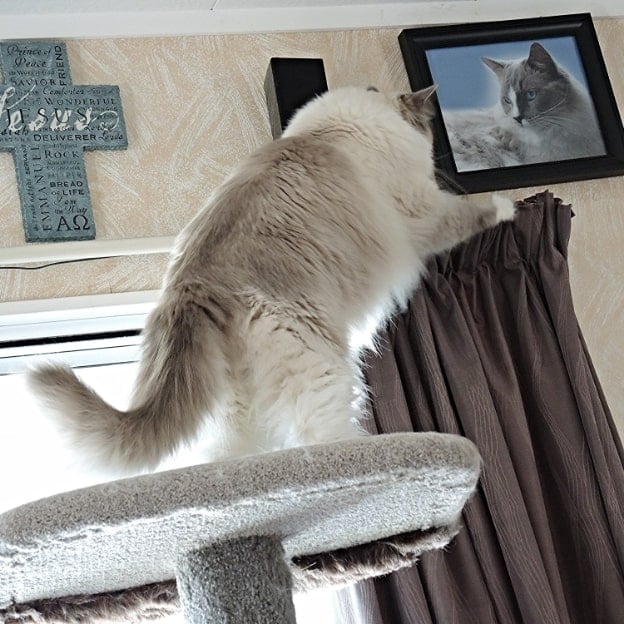 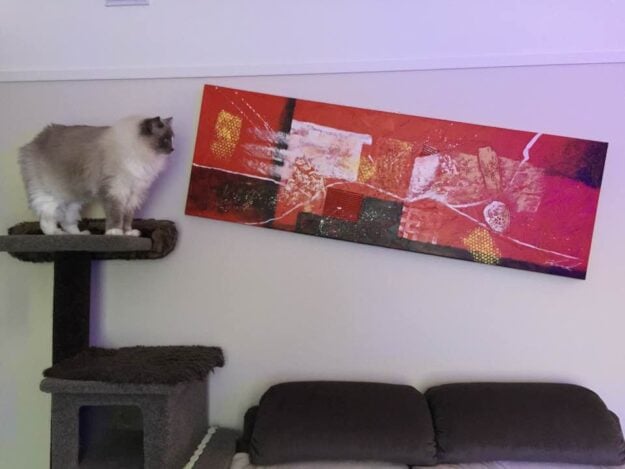 Then another time walked into lounge to find him on tower pushing top of painting down causing it seesaw up and down. One day as I opened the drapes Zimba stood up on his tower and unhooked the speaker from wall which came down hitting me on side of face, giving me a black eye and cheek. Needless to say, towers were moved. Few years ago I had surgery on my wrist and was in a removable cast that went from hand half way up my arm. I had to take off to do my exercises. One day half way thru I catch a glimpse of my plaster cast in a upright position walking across the table.

On closer inspection there were 4 white legs at the bottom of it. Zimba had somehow got his top half in it and was walking across the table it looked so funny.

He is very affectionate but due to being such a long cat and sleeping 90% of the time stretched out on his back he prefers to lie next to me touching me rather than on me. 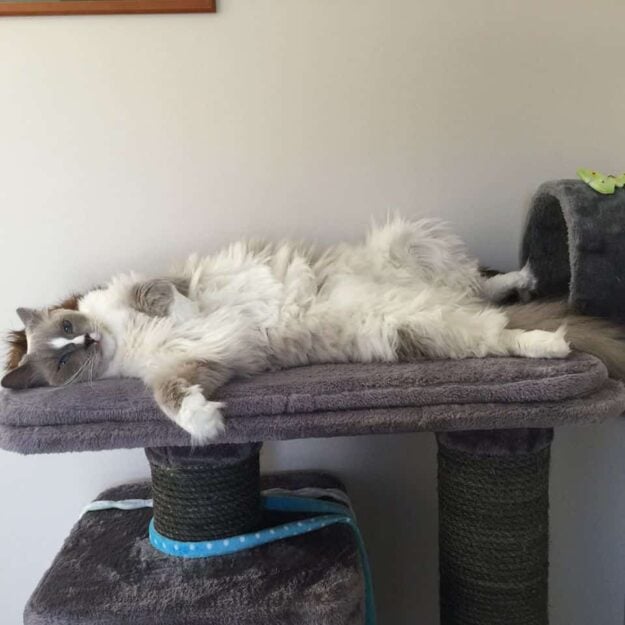 He also sleeps in the scales and pram. 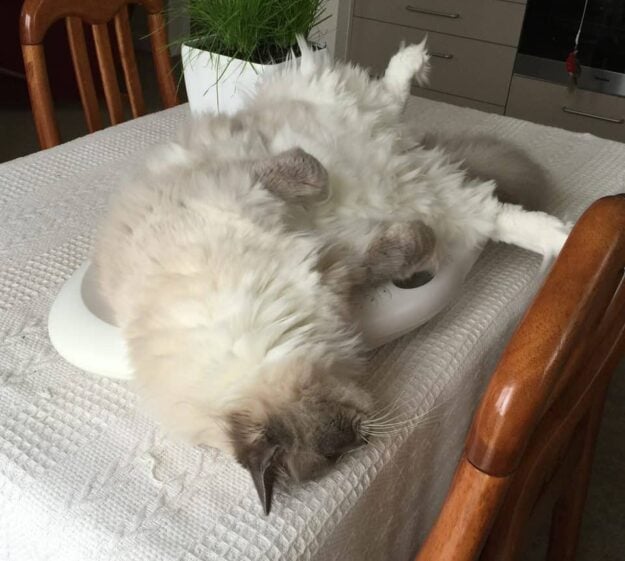 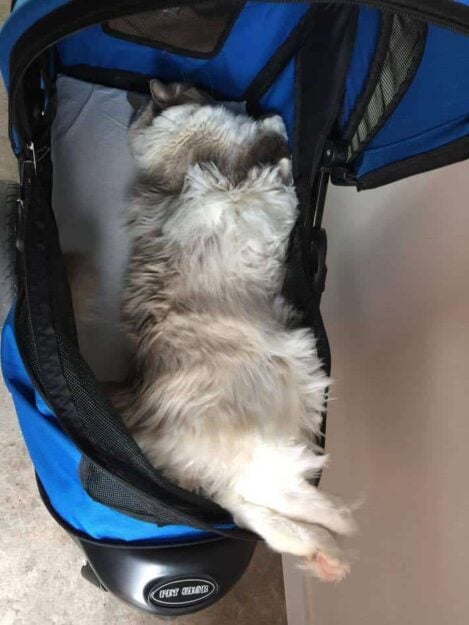 Every morning he wakes me by walking over me then proceeds to sit on my chest and give me a face wash. He then head butts my hand for a stroke, if I don’t stroke him he rubs his head over my hand trying to get under my fingers for a stroke. He then lays down next to me for all of 5 minutes then starts over again with head butting my hand and licking my ears and face. Recently I was rudely awoken at 7.45am by Zimba standing on my bed remote so my legs and head both went up at same time. One mum sandwiched between. Took me a minute to figure what was happening I then had to try and get out of bed while sandwiched between as couldn’t reach the remote to put back flat... He also loves going for walks in the cat stroller after breakfast he jumps in and meows to let me know he’s ready to go. 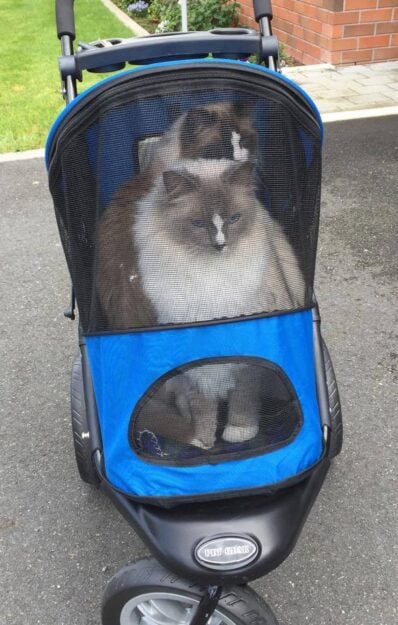 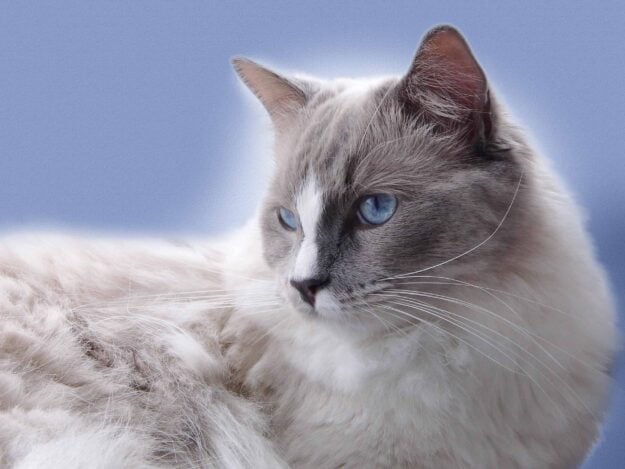