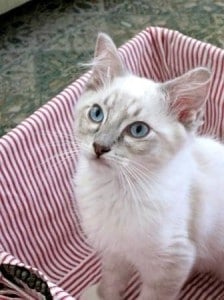 I first began researching Ragdolls over a year ago and really thought I had found the breed for me and my family.  I wanted to meet one in person however to make sure and went to a cat show last year and fell in love with them!  I knew that our next family member would be a Ragdoll and that in a couple of years, when my twin daughters were older, we would adopt one.  Then this past spring we lost our 13 year old greyhound and I realized after she was gone how sad it was not to have a pet in our home.  We never had a cat with her because she was not a "cat safe" greyhound and my husband is not a "cat person" - however since our adoption of Django, he is definitely becoming more open minded! 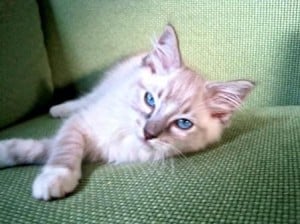 So I began my search for a Ragdoll.  At first I loved the blue bi-color pattern and wanted a female but when I contacted a breeder she said she had a blue lynx mitted male available. I quickly looked up all the pictures I could find on the Internet of blue lynx mitted Ragdoll cats and kittens and decided that this was the color pattern I loved!  Of course when I went to meet him for the first time at seven weeks old there was no way he wasn't coming back home with me in a few weeks!  Django's breeder is Barbara McKee of Hemlock Trails in CT. 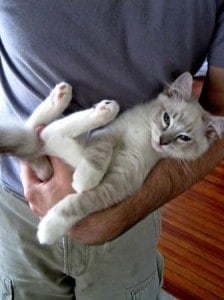 Django, who is named after Django Reinhardt (a jazz guitarist from the 1920's) is almost four months old now. He has been a wonderful addition to our family.  Some of Django's favorite activities are sleeping with our shoes on the mat near the front door, playing with his Cat Dancer toy and being carried around the house cradled in our arms like a baby.  He also loves to eat and has nearly tripled in size since we brought him home 6 weeks ago. He is so cuddly and playful and always right there in the room with us - all of the characteristics that I wanted in a cat.  He has adjusted to life with toddlers amazingly well and I think that it is awesome that my girls get to grow up with such a beautiful animal and friend. 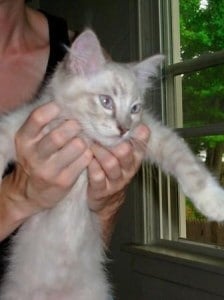 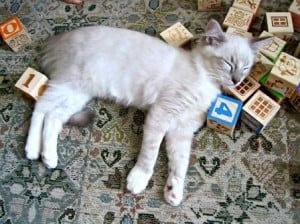