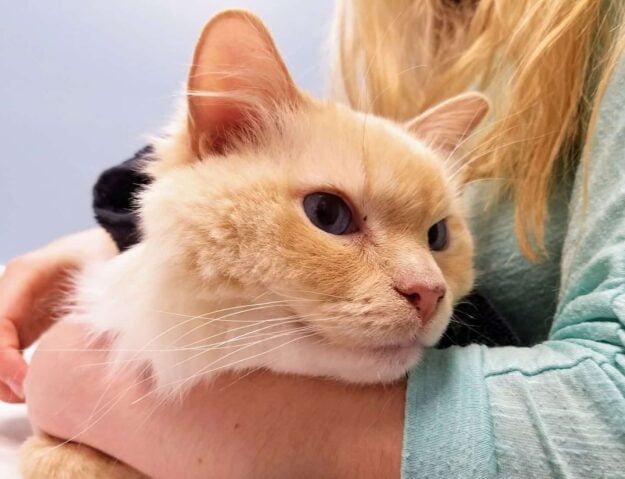 As a rising fourth year veterinary student, I was missing my dog from back home and desperately wanting the company of a pet (plus, it’s kind of expected that if you are a veterinary student, you have at least one fur baby in your household!). I knew with clinics starting soon, I would not be able to care for a dog. We’re sometimes away for 16 hours at a time, and I would not be able to make it back in order to walk him/her. 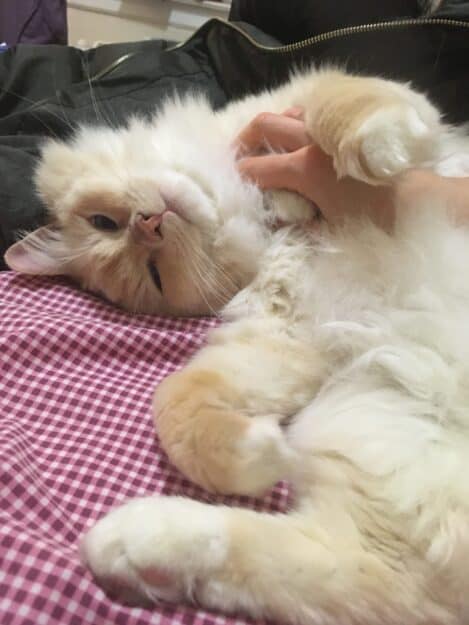 However, I knew I wanted a loving, loyal, and cuddly animal to brighten my day whenever I got home. As I talked with my friends at school more, I discovered the wonderful personalities of Ragdoll cats! My classmate’s mom breeds them, and he invited me to meet two of his. I was in love! I immediately contacted his mom to see if she had any ragdoll cat retired breeders that were looking for forever homes, since I knew I would not be able to provide a kitten with all the attention it deserves while I am away at rotations. 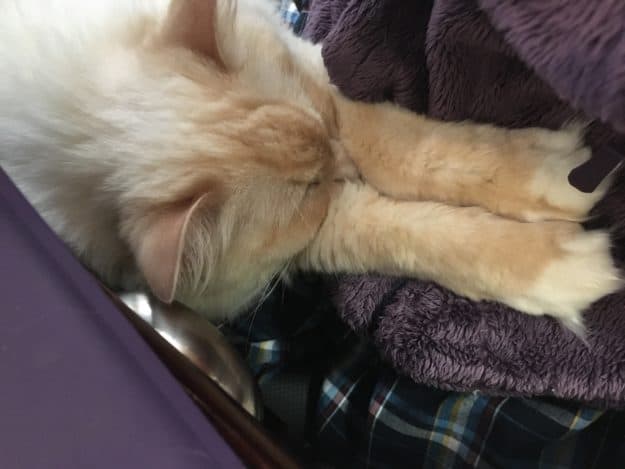 When I called her, I talked with her for an hour about Ragdolls and learned that she had two females available, one of which was 4-year-old named Summer. She sent me a picture and her beautiful blue eyes melted my heart! After buying all the necessities I could think of, the next weekend, I made a 5.5 hour drive up to New York to pick up my new friend. It was a pretty memorable drive, as the roads were snow covered in April and I got lost in the town I was picking her up from! On the way back, my little girl was pretty quiet, but would rub her head up against the carrier door – I knew this was a good sign, as I was hoping for a cuddly kitty! During the long drive back, I also had some time to think of a more perfect name for her, since she was too regal looking for a name such as Summer.

I ultimately decided on “Gwenoviere” (sometimes with “Princess” in front of it 😊 and “Gwen” for short) as a suitable name for her beauty and personality. Although it may have been a bit of a risk agreeing to adopt a cat that I had never met, I could not have been happier with the outcome. 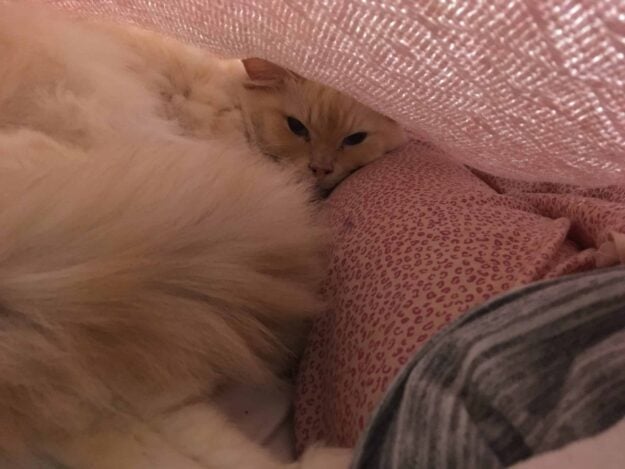 After about a week of adjusting, Gwen’s true personality began to come out as she would jump up on the bed with me and want cuddles for as long as I was willing to stay there. Unlike any cat I’ve ever known, Gwen enjoys sleeping underneath the covers with me! If she’s not able to get in on her own, she will demand that I make an opening for her by pawing me incessantly. She also loves kisses, not necessarily giving them, but rather receiving them! She’ll put her face right up to mine and press her nose into my lips if I start to make kissing noises! 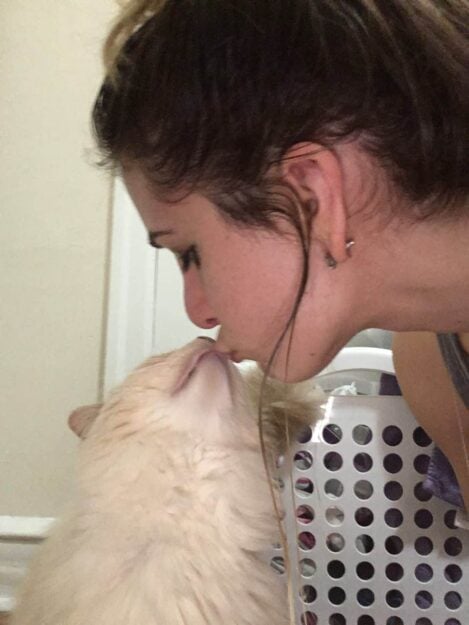 Gwen soon began exploring the rest of the apartment, although she still prefers my room. One of her favorite places, to my surprise, is actually the bathtub! I was shocked one day when she followed me into the bathroom and jumped right in, even though it was still wet from me taking a shower! I have not attempted to give her a bath yet, but I hope this is a promising sign. 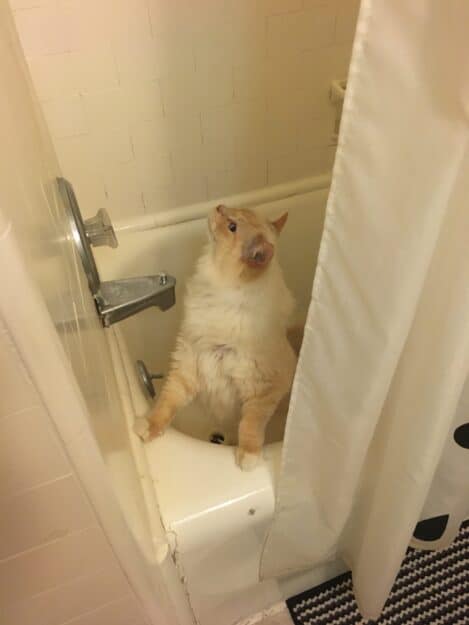 Making the transition into clinics has been pretty tough, but Gwen is always there for me. Whenever I come home from a long day, I can usually find her buried underneath the covers on my bed. As soon as she hears me open the door though, she begins to stir and emerges to greet me (wanting kisses of course!). If I have to spend late nights studying, she’s always there to cuddle with me in my desk chair! Her playful nature is another source of amusement as she loves to pretend to be a ferocious hunter! 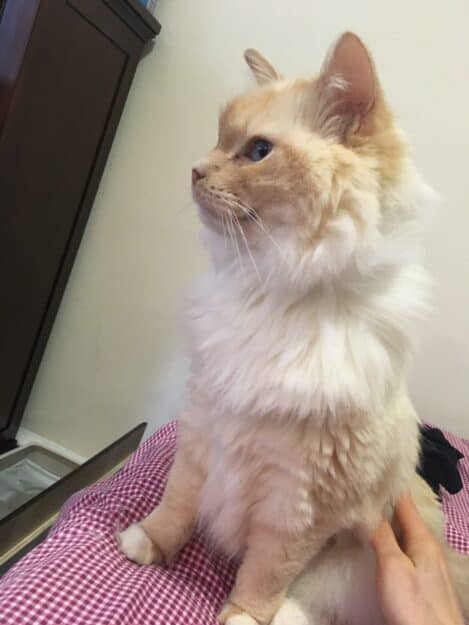 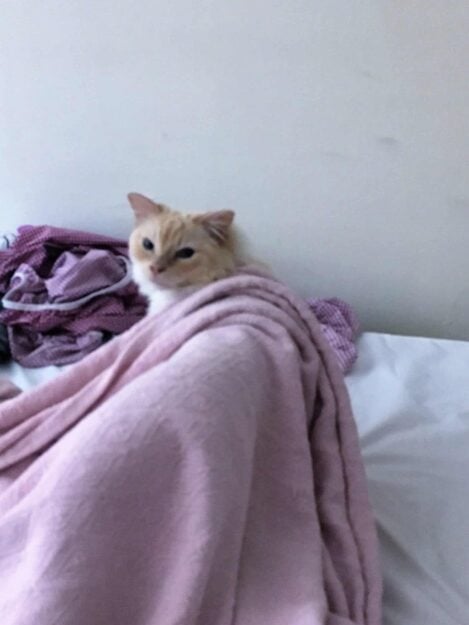