Well, I missed posting this on Sunday, November 7, which was his true 1-year anniversary.  I cannot believe he has been here one year.

Of course, when I picked up Charlie, I was with my mom, but when picking up Trigg I was by myself for the flying process and the waiting in the airport process - hence, the photo is taken by me - I just extended out my hand and took the photo - needless to say, I got a few looks in the airport.

He also continuously purred, which was wonderful.

Shortly after we got back to Kansas City, we headed down to my parents' lake home for Thanksgiving and Trigg was exposed to two more kitties and two German Shepherds (my mom and dad's pets).

Trigg doesn't care much for dogs.  Charlie doesn't hardly notice they are there, but Trigg wishes they didn't exist - although I am sure he would be more tolerant (and I say, tolerant for a reason) if he had to live with one.  It is important to me that he is exposed to dogs though, in case I ever end up with one, one day.

Charlie and Trigg had a rough few days getting to know one another - but by the time we were at the lake, they were best buddies, as you can tell from this photo that I took with my iPhone:

Trigg and Charlie at the Lake November 2009

Okay, if you remember reading the post I did about Charlie's 1 year anniversary with me, then you know I stuck him in Sherpa Sport Duffle that I brought him home in to see how much he had grown.  Of course, I had to repeat the process with Trigg. 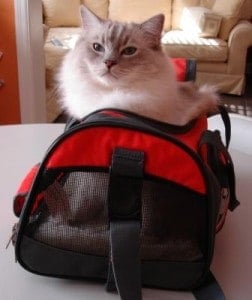 Here's a video I took of him the day after I got him - while he was at the vet in his Sherpa Bag:

I want to thank Lora Tesh of Soulmate Ragdolls for both Charlie and Trigg - they have brought so many hours of happiness into my life, and I adore and love them beyond measure.