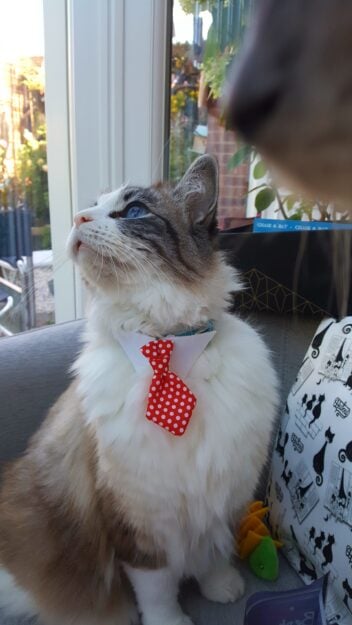 He has just turned 4 years old and is a big cat for his age. This photograph was taken on his birthday. My daughter bought a tie for his birthday, which makes him look very handsome. We came across Hamish when we were searching for a Ragdoll cat to buy after we lost our other male ragdoll to cancer. Hamish was owned by a lovely lady and her husband who lived in a pensioner’s bungalow with a small garden. It was apparent that they did not have the space for him and could not let him out on his own, therefore they would take him into the garden on a lead. She was upset about having to let him go, but we said that we would look after him and keep in touch with her, which I am pleased to say we have. Hamish wasn’t very friendly towards other cats and therefore we had to introduce him slowly to our other cats, at the time were Luna and Bella both ragdolls, Bebop a tabby and Lula a grey cross Persian. 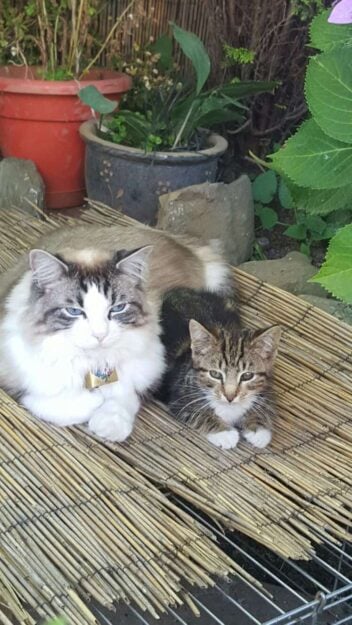 Hamish soon settled into the home with everyone, although he soon took a dislike to Bella. It has taken us a couple of years to get to the point that they tolerate each other. After losing Bebop to old age, we found a stray kitten, a tabby. From day one both Hamish and the kitten became firm friends. Hamish would look after the tabby who we named Tiger. They have continued to be best buddies and chase each other all over the house and in the garden. 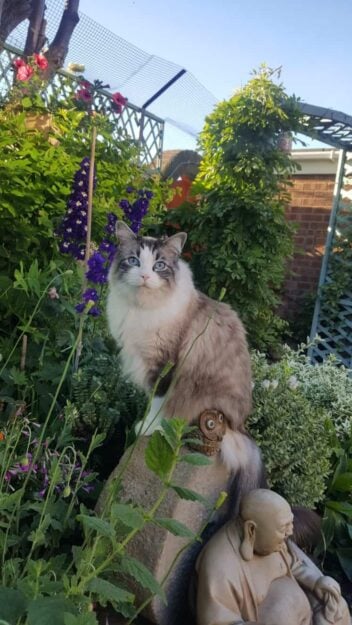 Hamish is a lovely cat with a big personality. The one thing he has always done is talk, he never shuts up, which is cute sometimes. I’m sure he believes he is a dog in cat’s clothing as he also growls at people who approach the house or anyone he does not know. He likes to follow us everywhere in the house and especially if he thinks we are going out of the front door, as he thinks he should be allowed to go out too.
Hamish is a beautiful boy and looking at his photo’s I’m sure he thinks that too. He doesn’t mind having his photograph taken and normally poses to ensure you get his best side. 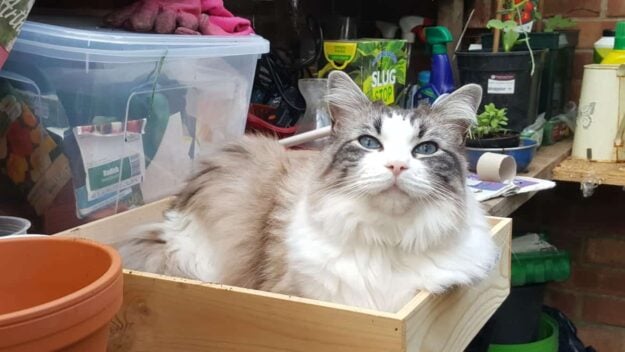 I was introduced to ragdolls by my husband around 10 years ago after coming across one whilst on holiday. After that was when I started looking out for any that needed a new home. They live up to their name of being a ragdoll. When I pick Hamish up, I must sit him over my shoulder as he quite heavy and big. It is like cuddling a big teddy bear with all the lovely fur he has. He keeps himself clean and is not happy about being brushed, but we persevere. Hamish also likes to drink water from our pond and gets a surprise when the fish come over to him, thinking that he is there to feed them. He has never made any attempt to go for any of the fish. He also lives with a small conure parrot who rules the roost so to speak. He keeps all the cats in their place. 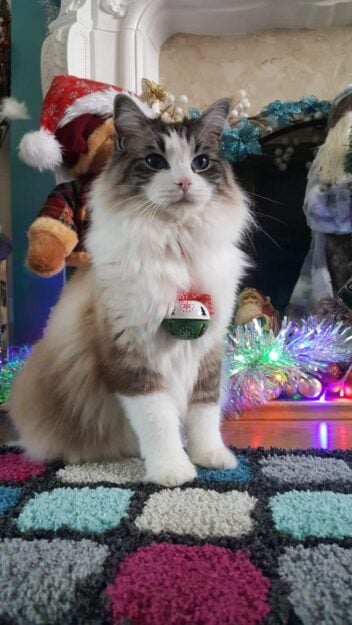 Having had Hamish for two years now, we have seen how he has grown and we are so pleased that he has finally found a forever home with us. I’m sure he knows that too.