Rocky and Lucky - Ragdolls of the Week 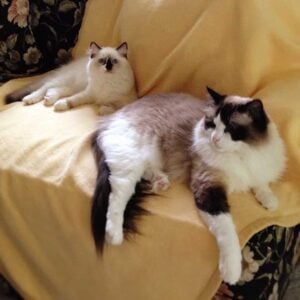 I'd never seen a Ragdoll prior to the day we got Rocky!

Several years ago, I had a sweet, but very cantankerous, ginger tabby girl named Prissy, who had lost a leg through an accident, and was depressed because she could no longer be the outdoor huntress she had been. No more skinks brought squirming into the living room to chase into the AC vents! I decided she needed a kitten to cheer her up, despite the face that she had never liked any other cat, and would even swat at her brother when we'd walk up the street to visit him. So it had to be THE SWEETEST KITTEN EVER! Purely through research on the internet, I became convinced that ragdolls were the sweetest, most docile cats ever. Didn't matter that I'd never seen one, or knew anyone who had one. I found a somewhat local breeder (MusicCityKittys - no longer in business.) My husband and I drove to look at 12 week old kittens, but we fell in love with a 5 month old the owner had considered keeping. She said he was going to grow up to look like his dad: a gorgeous 25 pound hunk of male cat fluff. My Husband exclaimed,"I want him!" Before we reached the car, we agreed on the name Rocky because he looked like a baby raccoon with his white body and dark eyes, which led us to Rocky Raccoon, and who doesn't love the Beatles! 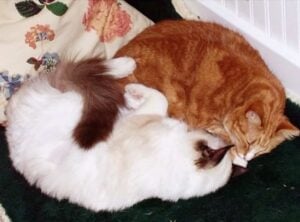 Prissy slowly accepted her new friend, and he kept her active and interested the rest of her days. When we lost her, I thought I'd wait awhile before getting a new cat, but Rocky was grieving deeply for his ginger friend, and I knew I had to act quickly for his sake. We found a kitten at Rags 2 Dazzle Ragdolls near Chattanooga. The breeder, Addie Griffin, emailed me pictures, recommending one kitten who was particularly cute, with a funny personality. We didn't want just a pretty face - and coat - we wanted a kitten who could measure up to Rocky. Where Rocky is beautiful, this kitten looked like a little prankster, a clown! He was quickly named Lucky at my husband's suggestion, and he is indeed a lucky cat who gets to share his life with Rocky, and be pampered by his family.

When we first got him home, Lucky was quickly accepted by his new big brother. Rocky, however, seemed to think that Lucky was HIS kitten. He cleaned him constantly, and would fuss at me vehemently if I picked up a meowing Lucky. It was as though Rocky thought I was hurting his kitten, and he was not going to stand for it, at all! 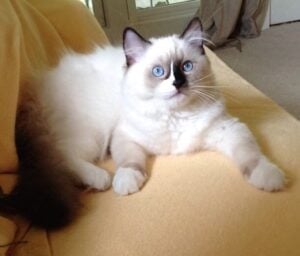 Lucky's now a bit over a year old, over 14 pounds and still growing. I consider him a teenager. Rocky, at 6 years, is just over 13 pounds. They are the sweetest cats ever. As I sit reading the news and drinking coffee every morning, they take turns jumping up on the sofa next to me, to be petted, patted, and cuddled. Lucky particularly loves his tummy rubs. Neither are lap cats, but they'll cuddle for hours. Such sweetness! Lucky has developed into the clown we thought he'd be, and keeps us constantly laughing. Never have I seen another cat roll off the bed in his sleep, hitting the floor with a loud thud...probably still asleep.

We've learned a lot from the Floppycats website, particularly benefiting from product recommendations. Rocky has never had a mat in his life, so I was surprised when I started finding lots of little mats in Lucky's silky coat. Floppycats led me to the Untangler comb, which has rotating teeth to prevent pulling and pain. It has totally solved the matting problem,  and both boys love being combed with it.

The boys are not on YouTube, but they do have an active Instagram account, Nashvillecats, where they have made some very good friends around the world. It's fun to see that Ragdolls in Sweden, England, and even Louisiana are so similar to our boys here in Nashville. 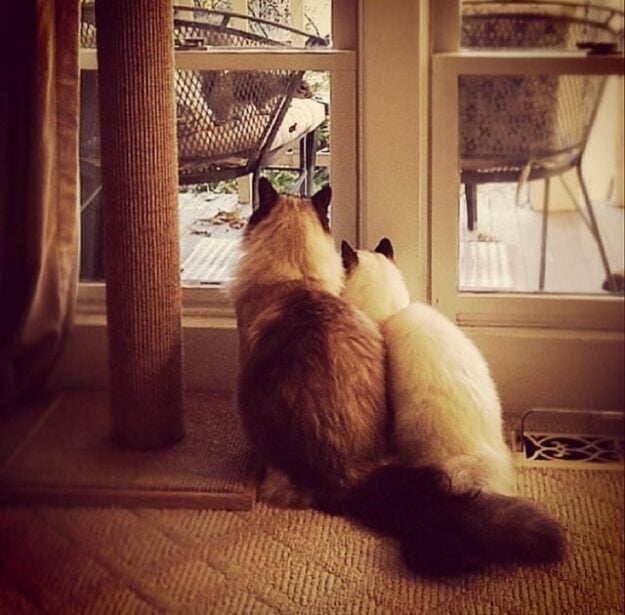 Visiting with their friend Chubs the squirrel 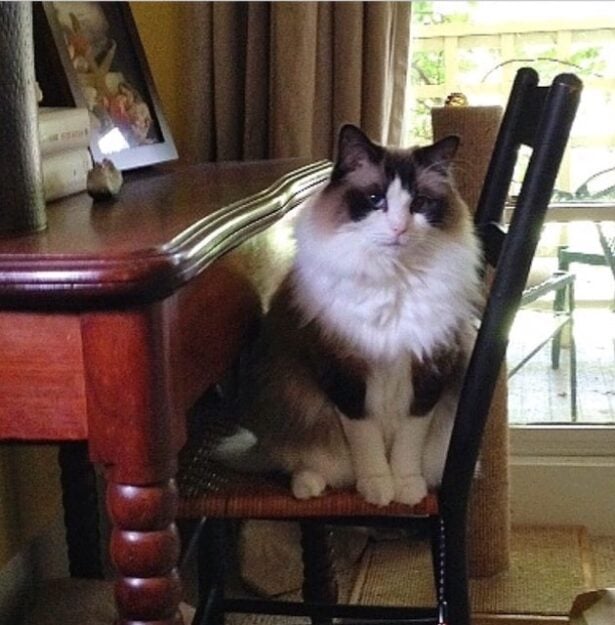 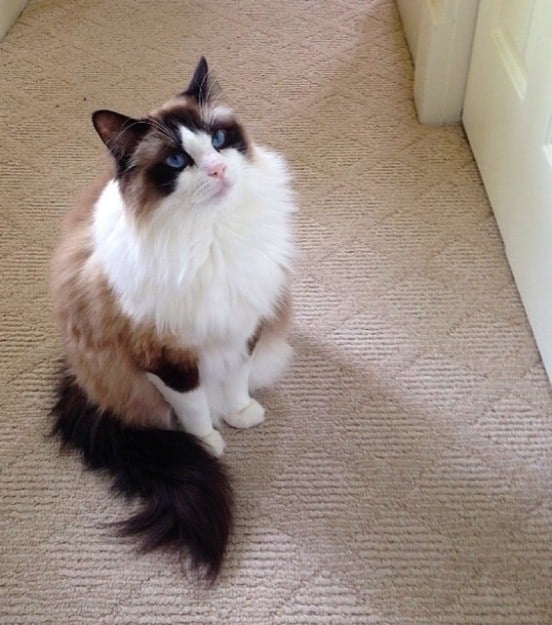 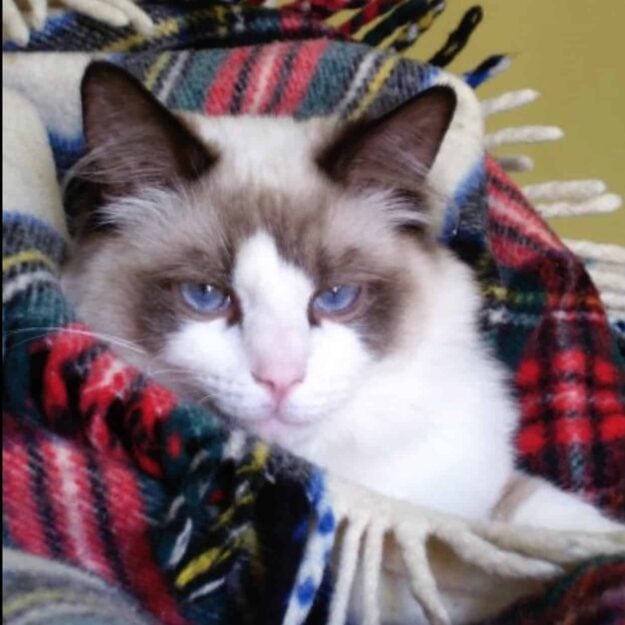 Rocky as a kitten 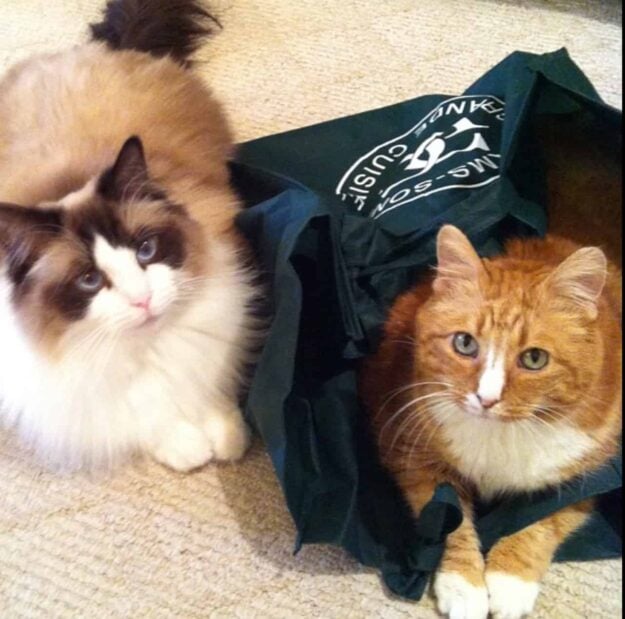 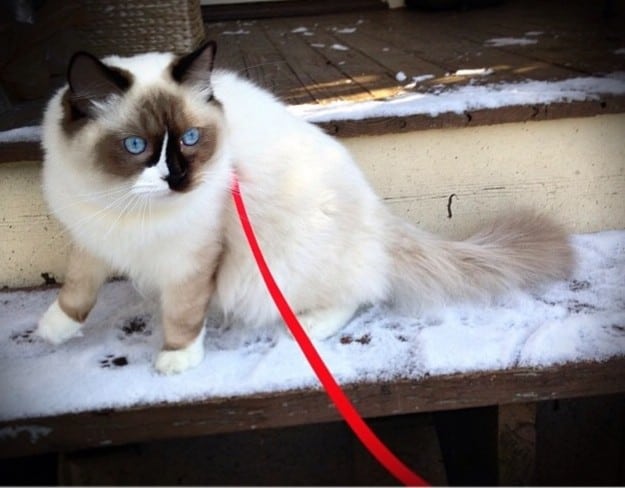 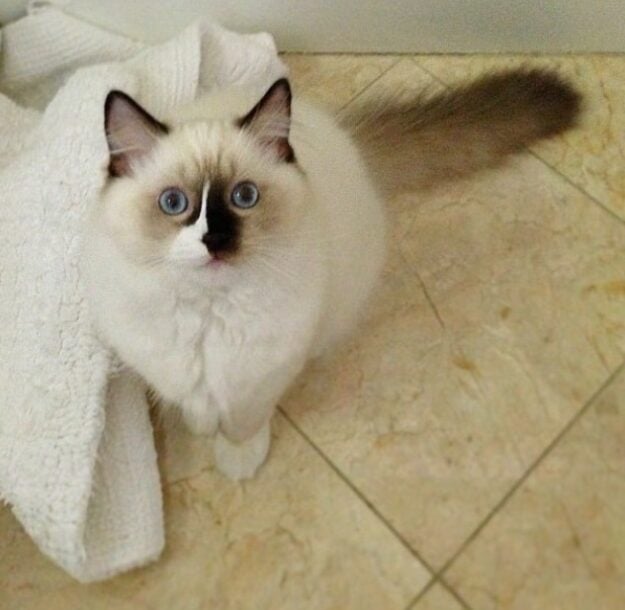 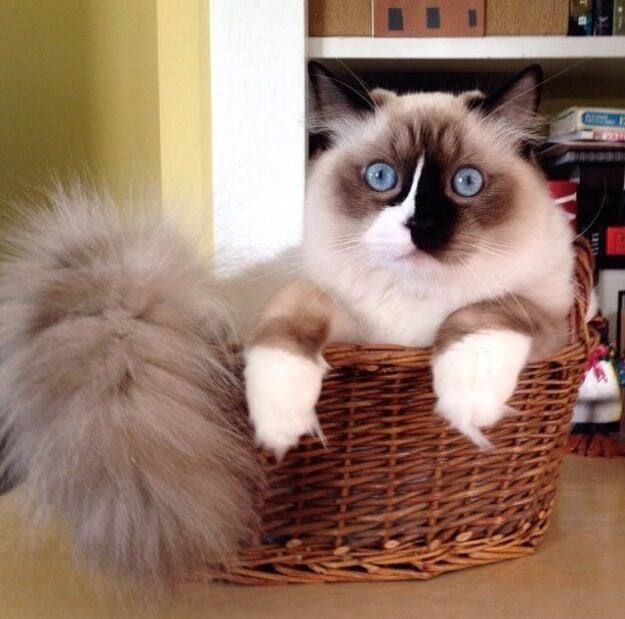 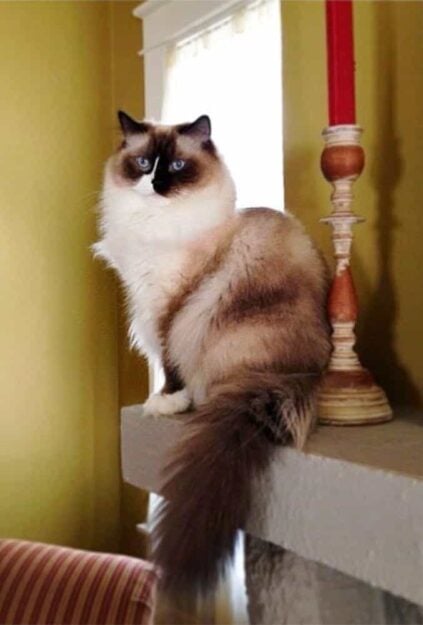 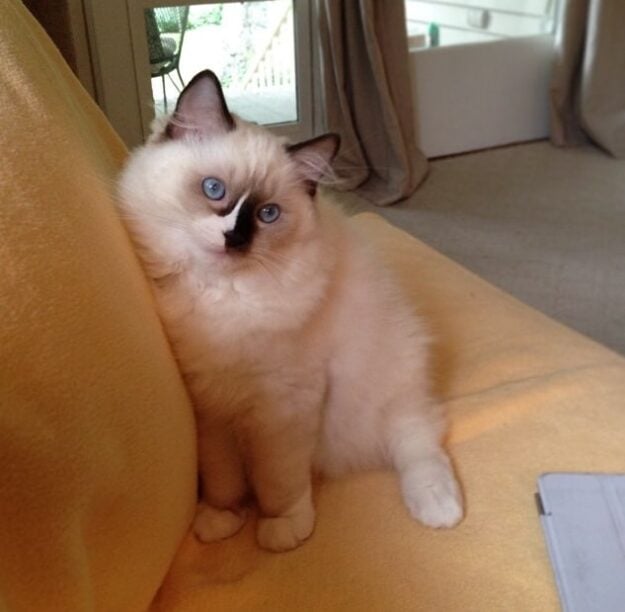 Looking up to his big brother 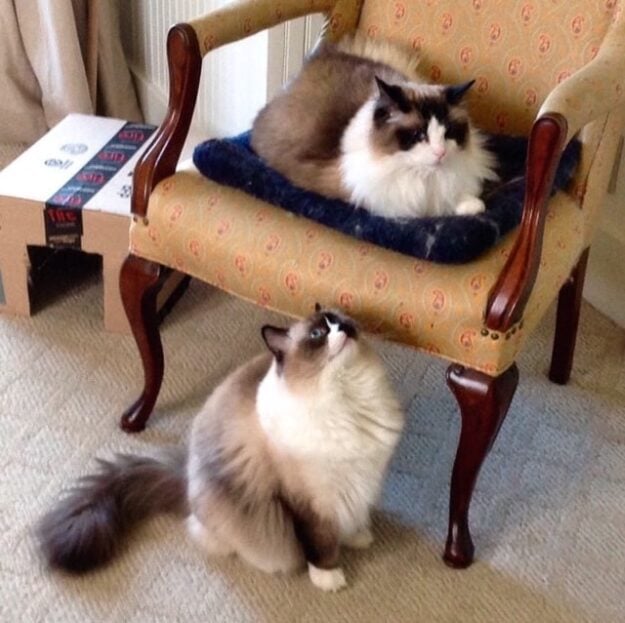 Still looking up to his big brother 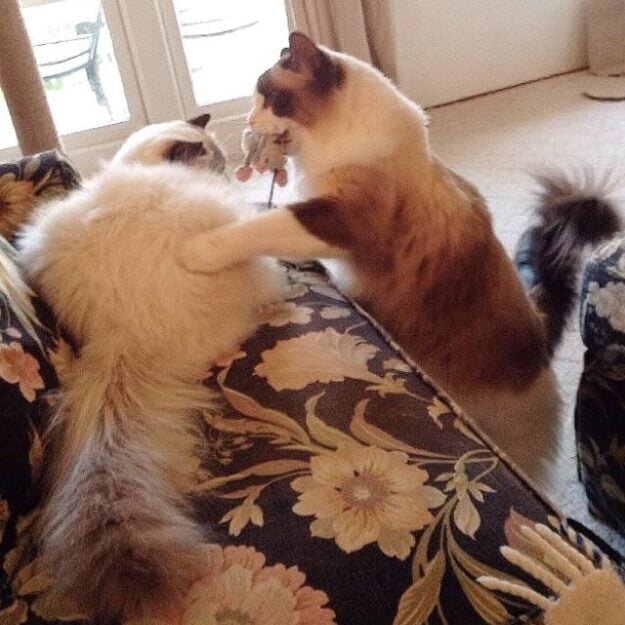 A gift for you