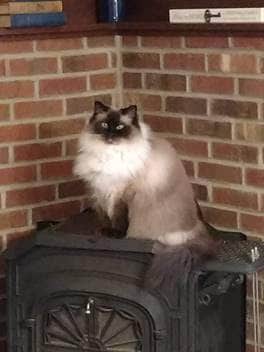 This is Stella. She is a 2-year-old Seal Point and is a true princess. She is also our first Ragdoll.

I’ve had cats all my life. Almost 3 years ago when one of our kitties passed away, I started considering different cat breeds and discovered these beautiful creatures. I researched markings and colors and fell in love with the Seal Point. We found a breeder, 4 hours away in Kansas City and made the drive out to meet our new baby shortly after she was born. Went back again a month or so later to pick her up. 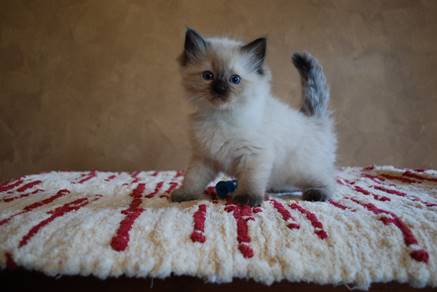 She was a little shy at first but soon found a friend in our 6-year-old Brittney Spaniel. It has been amazing to watch her grow and change over these past 2 years. She went from a tiny white ball of fluff with dark brown ears, nose, paws and tail, to the beauty she is today.

She loves to watch the birds in the morning from atop her Kitty Condo in my bedroom or just relaxing anywhere she decides is comfortable including the bathroom sink.

She loves to be groomed. As a matter of fact, if you pick up her brush, she’ll follow you around. I don’t mind though. It gives us more bonding time. She’ll roll around purring, letting you keep brushing her until your arm falls off. It’s great because she always looks good and I’ve never had to deal with matted hair.

She wasn’t much of a snuggler when she was little but the older she gets, the cuddlier she becomes. The only bad part is, even with a lot of brushing, she still leaves you covered in hair. Small price to pay for such an awesome cat. I just buy lots of lint rollers.

As I was researching the Ragdoll, it said you should never let these cats go outside because they are so docile that wouldn’t defend themselves if attacked. However, the website shows lots of Ragdoll owners with their fur babies outside. Recently, I took my Stella outside but on a leash. I’m so afraid she would get excited and run off. Anyone else dealing with this dilemma? I’ve taken her out a few times now but I don’t want her to think she can just go out on her own. 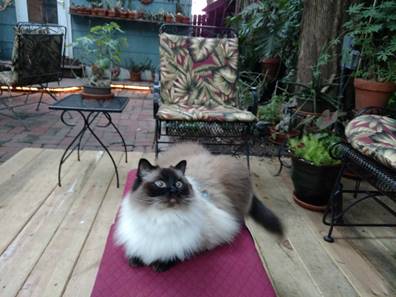 Last September, we took Stella on vacation with us to Florida. She did well. It’s a 13-hour drive that we took in 2 days. First time I attempted to travel with a cat. I purchased the largest soft sided carrier I could find. I left it open and in the floor for her to get used to before we left. She cried for about the first 30-minutes but once I let her out, she quieted down. She spent most the time either in my lap or laying on the console between our seats. I also bought a leash with a harness. When we were traveling, we kept the harness on her so that if one of us opened the door and she decided she was going too, we had something to hang on to. At rest stops, we would put her on the leash and let her stretch her legs a little. 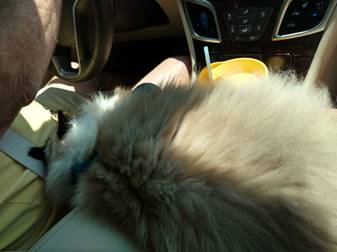 The house we rent is right on the beach and has a screened in porch all along the back. That was her favorite spot to watch the sea gull and feeling the ocean breeze. It’s almost like she feels like she is on vacation too. We’re going back again this year. Hope she does as well. 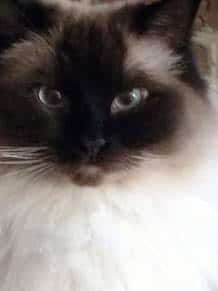