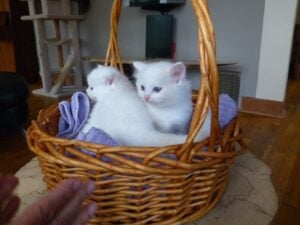 Lake – Ragdoll Kitten of the Month

My kitten was born on September 2, 2014, his name is Lake, & I bought him from Seattle Rags in Seattle, Washington!  What a delightful place to buy a kitten, I was so impressed with Seattle Rags Cattery that I would buy another Ragdoll from them in a heartbeat!!  Lake is a pure white blue eyed Ragdoll, & he has the softest fur, as his Daddy is a Mink Ragdoll & his Mommy is a pure white Ragdoll!!  His eyes are an icey blue!!!  There were 4 kittens in the litter, 2 pure white boys, 1 pure white girl, & 1 blue bicolor girl.  I have a Blue – Bicolor Ragdoll named Ocean, & an English Cream Golden Retriever named River;  I decided to stick with the water names when I named Lake!!

Lake just melts in your hands when you pick him up, & he is constantly chirping when he plays, his big white paws are to die for & he has the sweetest personality!  His favorite toy is called The Mystery Triangle, it has 2 round openings with a dangling toy on top & he likes to hang out in it & roll around in it!!!  He also loves the spongy soccer balls that he carries in his mouth. Today Lake was hiding from Ocean in River’s playpen & then jumped out when he saw her walk by, they were having so much fun playing in it!! 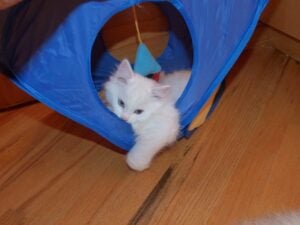 Lake plays with every single toy in our house, & he already climbs on my lap & starts purring loudly! When I pick him up, he closes his eyes & starts purring, he is a little cuddle bug!!

Before Lake was born, I bought Ocean a large 4 tier “Cat Tree House” & at first, Ocean only went in it a few times, then for weeks, she never went in it!  I bought a large one because we had already planned on getting another Ragdoll & I  was so disappointed that she didn’t like it, but all at once she was in it every day, falling asleep in it, & usually she would go to the top tier near the ceiling!!  After we had Lake for a week, I put him in the tree house, & he seemed to like it!! Then I started letting him play in it, & now he likes to go to the top tier, just like Ocean, so I am relieved that theTree House is a big hit with our Ragdolls, guess it took Ocean a while to like it because it is a “Real Tree,” & she probably didn’t like the smell of it at first.

At first, Lake was afraid of River, because he had never seen a dog before, but now  they seem to really like each other, touching noses each day & while Lake is on my lap, River comes up & Lake doesn’t run off, he just sits & looks at River!!  Lake is just a  delightful kitten, & he was trying to eat sausage off of my plate the other morning!! He loves yogurt & people food, that we mostly don’t allow him to eat!!

Lake loves our Christmas tree & loves hanging out under it, using the presents as Pillows!!! Lake is a twin, as you can see them at 5 1/2 weeks in the basket, I had to choose which kitten I wanted, & they looked identical!! 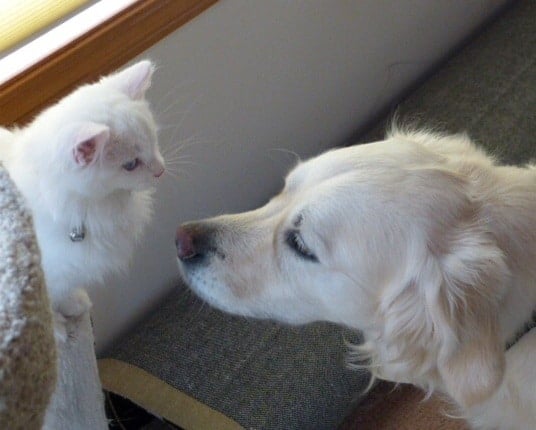 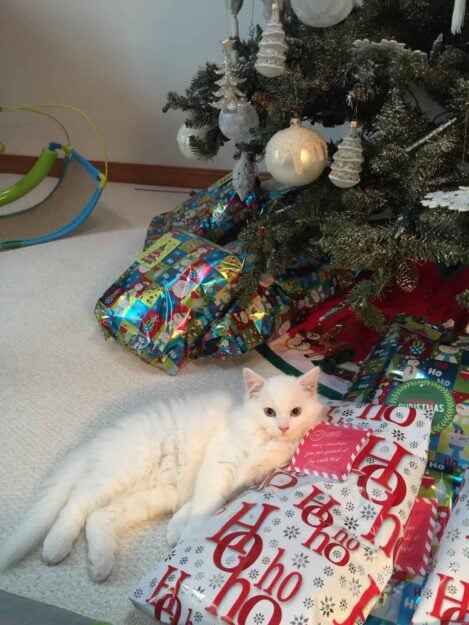 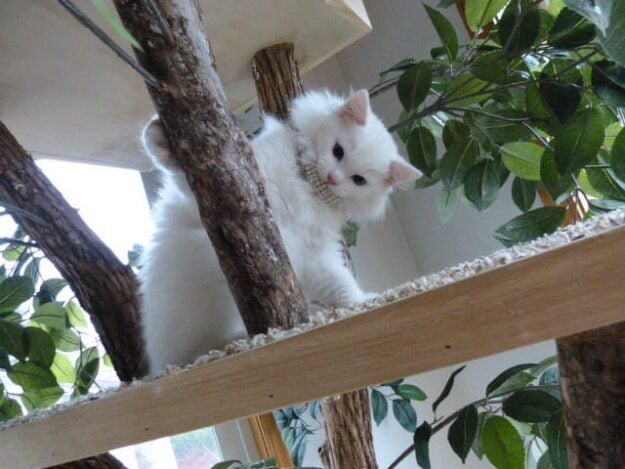 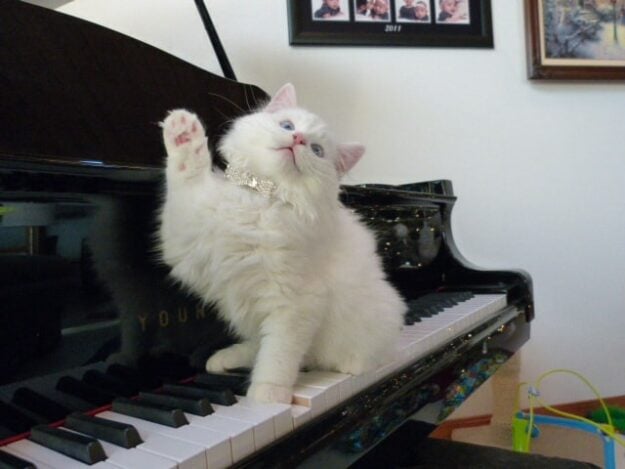 10 thoughts on “Lake – Ragdoll Kitten of the Month”