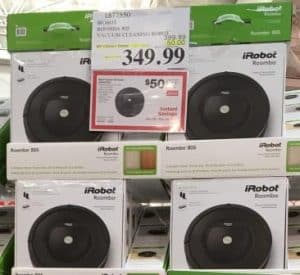 I have had my eye on a Roomba for some time. But I didn’t have the funds or need to have one, really. However, when I was at my cousin’s house and saw she had one with two dogs and two Ragdoll cats, I wanted to know more. She told me that she absolutely loved it – while it wasn’t perfect, she loved having it in the house.

In December 2016, I saw that Costco was running a special on the iRobot Roomba 805 – $50 off until Dec 24, making it $350.  So I bought one – with the full intention of reviewing it for the site. I am SOOO GLAD that I bought it – I love having it in my home and talk about it to any pet owner I know. It isn’t perfect, by any means. But it is AWESOME. I really do not know how you make an automated robot vacuum that is perfect for everyone’s home. My house was built in 1940 and has several small rooms with different floors – hardwoods, carpet and tile.  It gets stuck on some of my furniture too – but it comes with these little things you can set up to keep it from going where you don’t want it to go (see our final review video posted below to see what I mean). It misses some things – some hair, some debris, etc. – but overall, it does a much better job than I ever did.  I used to vacuum every two weeks.  I hate vacuuming.  This thing vacuums daily and it looks like I just vacuumed.  Of course, it doesn’t get my stairs and other nooks and crannies that need vacuuming, but I can knock those out pretty fast. I also can run this thing any time I want or schedule it to run when I am sleeping.  There was an issue with a pet owner scheduling it out (which I talk about in our final review video below) – the pet owner had a dog that went #2 and the Roomba ran the poop throughout the house overnight and this went viral. But my cats don’t go the bathroom outside of their litterbox – if they vomit, they tend to vomit in the basement and hairballs are not very common in non-shedding months, so no worries there.  When it is hairball season, I will probably just adjust it to run manually. I work for myself from home.  I have conference calls during the day and have tested running the iRobot Roomba while I have been on the phone.  No one can hear it running – which delights me to no end, because I can kill two birds with one stone. I also had a surprise visitor over the holidays with only 1 hour warning – so I worked on cleaning my kitchen while the Roomba knocked out my vacuuming for me! I have the Roomba on my main floor – but also bring it to the basement and to my second floor for it to vacuum once a week or so.  And just let it run until the battery dies – then I bring it back downstairs to charge. 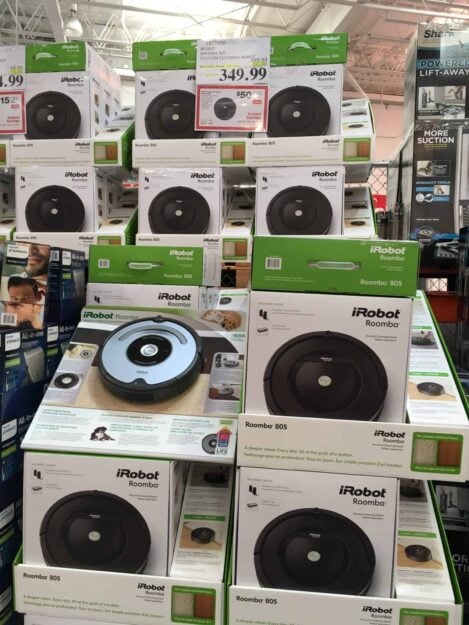 How the Cats React to the iRobot Roomba

My cat, Charlie, HATES my upright Oreck vacuum – he runs to the basement and hides behind the furnace when I bring out the Oreck. WHEN I BRING IT OUT – not even when I turn the Oreck on. It somewhat breaks my heart to see him so frightened as he is NOT a scaredy cat. But with the Roomba, as you can see in the unboxing video below – he was not fazed by it. In fact, he enjoys watching it move around the house and also following it.  You can see a video below that I posted on Instagram.  Charlie likes the little sweeper thing on the Roomba – and trying to catch it as it spins.  It’s pretty funny to watch him play with it. 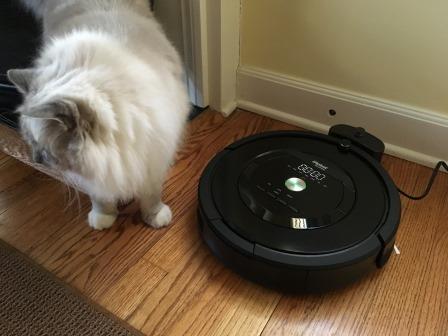 Trigg is fascinated by it – and sometimes mad at it – if it come towards him, he hisses at it. But he’s not scared of it.  It is nice to have a vacuum that picks up what I need it to without completely stressing out my cats.

The biggest test the iRobot Roomba had against Ragdoll cat long hair was when I brought it upstairs (away from the docking station) and let it run – when I first brought it up, I didn’t even think about it’s size and being able to go under my bed. Oh my goodness, I was so excited! I have not vacuumed under my bed for almost a year (since I got new mattresses) – and it was awesome to have the things the cats had batted under there, come out – not to mention getting their cat hair out. Now, with any excessive amount of cat hair and a vacuum, it did get clumped up – but it clumped up, making it easier to pick up than picking up my bed. 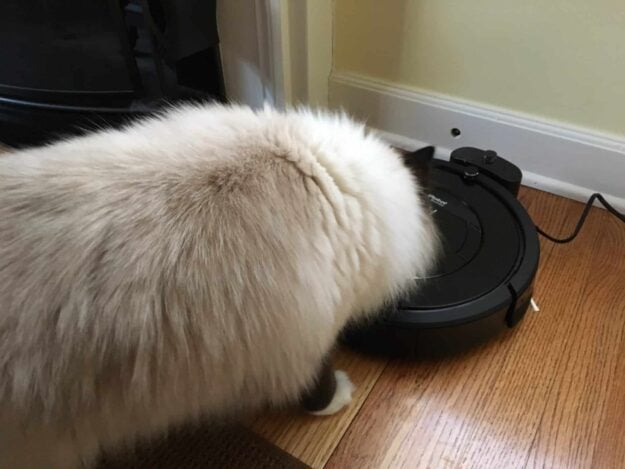 In our final review video below, I show how well the iRobot Roomba does at picking up cat litter on my carpet and on a tile floor.  I would say a hardwood floor would be the same result as the tile floor.  It does a much better job picking up litter scatter on carpet than it does on tile.

How Often Do You Clean It Out?

The waste basket is pretty small – heck the Roomba itself is like the size of a medium or small pizza, so it doesn’t hold a lot.  Regardless, how often you empty it is soo subjective that there’s no way to put an amount on it. iRobot recommends that you empty the waste basket after every run, but after it’s on it’s normal routine (daily in our house), I could let it run for 3 times before I would need to empty it.  I do try and empty it after every run as it takes about 1 minute to empty it.