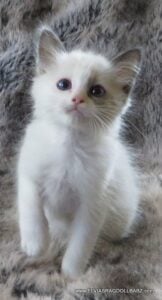 Bandit - Ragdoll of the Week

In late November of 2013 we experienced the tragic loss of our 17 year old Traditional Mitted Blue Pointed Ragdoll "Figaro". His loss resulted from a prolonged kidney failure issue. Euthanizing Figaro was a difficult decision for us to make. Losing Figaro had left us with profound sadness. The memories of his life with us will remain in our hearts forever. Our home felt empty without the companionship of a feline friend. 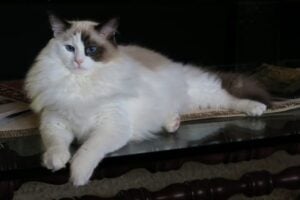 In early January,2014 we decided to search for a local Ragdoll breeder for the availability of a pet quality kitten.We did not wish to just "Replace Figaro"as we could never replace our lost longtime family member. Elvia's Ragdoll Babz located in Swanzey,NH was selected as our breeder of choice based upon Elvia's impeccable reputation for breeding friendly,family orientated Ragdolls. I contacted Elvia and submitted a deposit for a pet quality kitten from a litter that was scheduled to be born around the end of January 2014. The litter of six kittens,five Females,one Male arrived on January 27, 2014. We desired a male kitten and our wish came true. Elvia reserved the male kitten for us and sent beautiful photographs of him as he progressed during his 14 week development period. Because of his unusual facial pattern,a distinguished dark masked area around his left eye,we decided to name him "Bandit" He was classified as a Traditional Sealpoint Bicolor Ragdoll. Bandit was gifted with a brilliant set of deep blue eyes, a genetic feature of Traditional Ragdoll breeding lineage. 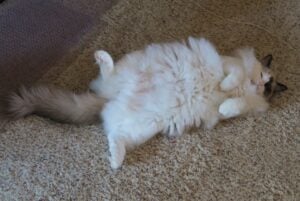 Easter Sunday weekend passed and it was soon time to make the one and a half hour drive from our home in Salem,NH to Swanzey,NH to pick up our fourteen week old baby Bandit. Prior to our arrival Bandit had been neutered and had received his kitten vaccinations and veterinary health exam. All these services were included in the original price. Upon our early morning arrival we were greeted at Elvia's front door by six beautiful Ragdoll Kittens. We were overcome by the kittens friendly welcoming reception and of being surrounded by these beautiful loving babies. Surely a result of the friendly, free ranging, at home environment offered by this breeder! Bandit appeared to me as the "runt of the litter" He was surely much smaller than his five sisters. I thought to myself that he needs some "fattening up" and I related to other stories I had read of the "runt" growing up into a large Ragdoll. We weighed Bandit this morning on November 13, 2015, 22 months following his birth, he weighed 15.8 pounds. Not too shabby for the smallest kitten in the litter. Perhaps time for some diet restrictions. 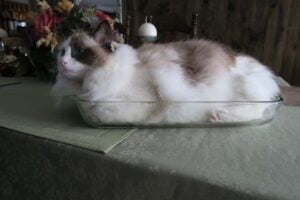 Bandit is a extremely beautiful affectionate "Lap Cat" He also loves to cuddle and knead us intermittently during our bedtime hours. His fur is as soft as Cashmere. He is very trusting and allows easy nail clipping and grooming procedures. His favorite toys are the Da Bird active toy and the Catnip Carrot toy. Along the way he has enjoyed many of the favorite active toys but eventually got bored with them and pursued other items of curiosity. Bandit's favorite kitty treat is PureBites Freeze Dried Cat Treats. Bandit loves to frequently lay on his back with his four feet extended upward during napping periods.He has discovered and frequents numerous hideouts in his home for extended daily napping. His favorite place is a large sized casserole dish that the wife had placed upon the dining room table for future storage. Bandit decided that this dish was his place to nap. We soon realized that he was claiming the dish as his own. We then went out and purchased a second one for our use. lol!! Bandit exhibits all of the admirable Ragdoll traits that make this fantastic breed Super-Special. Do you have a Ragdoll Kitten or Cat?  Consider submitting your kitty!  Ragdoll of the Week submission guidelines Read more Ragdoll of the Week submissions.