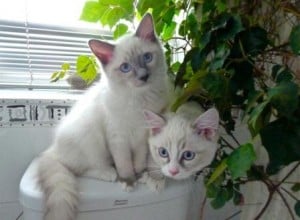 The sight of two four month old kittens squeezed on to the cistern of my toilet, blue eyes wide and ears perked was enough to make me crease up with laughter. I’d wondered what had happened to the bathroom, was I imagining the sound of flushing? No one else was in the house. Oh no, there they were, looking very proud of themselves, together in their naughtiness, the culprits, Titus and Siegfried. Just to make sure that I realized it was them, they did it right in front of my eyes, pushed the button down and kept their balance (an unusual occurence for them!) 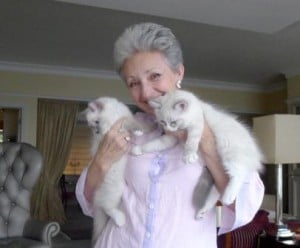 Titus and Siegfried had joined us from their breeder mum a few weeks before, adorable bundles of fluff with those beautiful eyes. The world must have seemed huge to little kitties but they soon took charge of the entire household and had their humans around their little paws. What am I saying? Little? They seemed to grow like bamboo; every day I was picking up more kitten! They scoff raw beef heart, scallop, prawn, chicken and even sneak the remains of yoghurt and oatmeal if I don’t hide it in the morning. 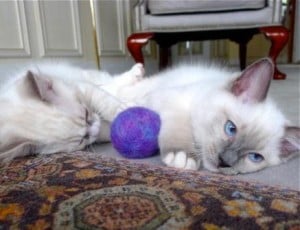 So far they have one destroyed lamp, dented silver photo frames swept off a table; “Didn’t you know Mum that this is OUR spot?” and gleefully scattered carefully arranged piles of books and letters every day. Cat Hockey is played regularly in between jousting bouts between the brothers. How they can be at each other’s throats one minute and grooming each other the next I shall never know! They tussle like a white tornado, a blur of white fur and grey tails but seem to hold no grudge. 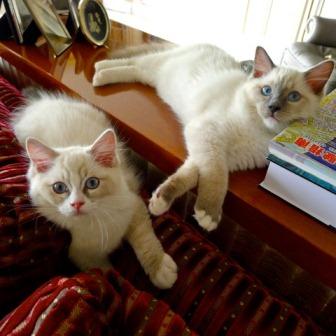 Titus (named for an ancestor of mine) and Siegfried (we love Wagner!) have filled the void left when our last cat, Oscar passed away. Oscar was a ginger from the gutter quite literally but a cat of character. It’s amazing to see Titus and Siegfried using his toys happily and I’m pretty sure that Oscar is quite happy with the new members of the family. Titus is definitely Alpha Cat… ambushing, leaping and seemingly half strangling his brother. When feeding time comes Titus looks across at Siegfried and inevitably leaves his own bowl to push his brother out of they way just in case his food is better. Dear Siegfried amiably transfers his appetite to the other bowl. No dramas!

So far they really are just like the puppycats of legend. Forever underfoot, wanting to be with their humans and generally making their presence felt. We wouldn’t be without them and are so pleased that Maggie of Dolly-Chiny Cattery in Hong Kong thought we would be good parents! 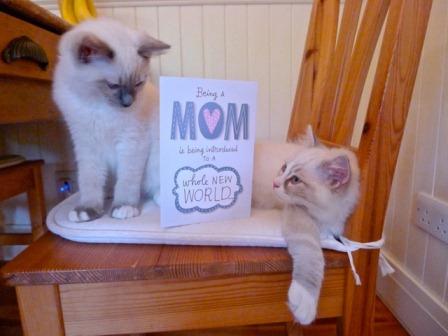 Yes I got a Mother's Day card from the boys! 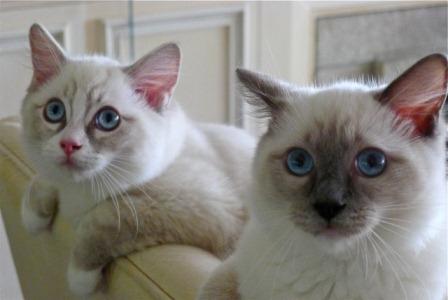 OK Mum, we'll be good; just don't shout at us 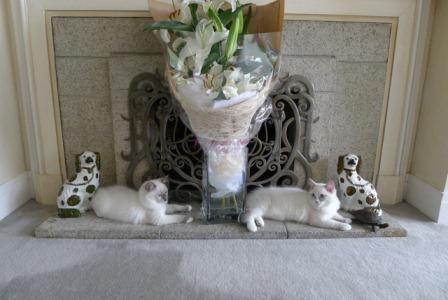 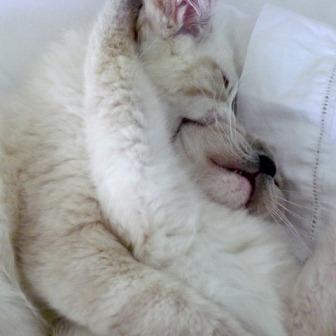 Would you just keep still while I bite your ear?