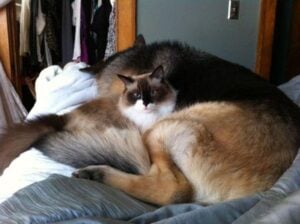 First thing's first.  I am a proud mama of a sweet German Shepherd named Maddy.  She was bored and needed a friend.  I didn't want 2 dogs, so in 2009, I began my exhaustive search for a feline friend for her.  I started at the pound, as I do believe in rescuing cats and have loved many pound kitties over the years.  I looked and looked, and never found 'the one.'  I knew they would have to be good with a big gentle dog. The last cat that lived with Maddy (my ex bf's cat) was pretty afraid of her, even though she would never hurt a fly.  So I started googling cat breeds that are dog friendly, and lo and behold, the Ragdoll kept popping up. 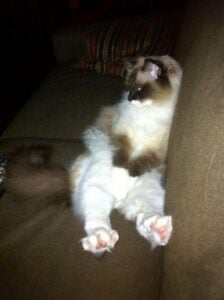 I searched and searched for local breeders and found one not far from my home, and went to see the two new litters that were just 2 weeks old and meet the moms.  I just about died and went to heaven seeing those little guys for the first time!  I told the breeder to watch them and pick one that had a funny personality and was more on the precocious side.  After a few weeks, she called and told me there was one with 'really cute face markings' that I might like.  I went to pick him out, and sure enough, the breeder was right.  Out of all the kittens (there were 4 left) 'Andy' was the funniest and cutest one.  While his litter mates were sleeping, he'd be creeping and pouncing on all of them, just raising hell.

I named him 'Raggedy Andy Warhol' because I'm an artist and I love Andy Warhol, and Andy is just a cute name for a cat.  The minute I picked him up and put him in his carrier to go home, he rolled on his back and started biting a glitter ball I had in there for him.  Just as laid back as can be.  He never made a peep.  When I got him home, I tried separating him from Maddy by locking him in a guest bedroom, but he would have none of that!  He cried and went right up to the dog and started biting her tail!  They have been besties ever since. 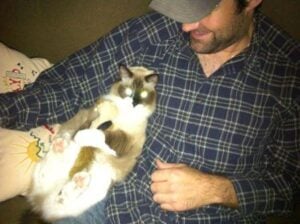 Andy's favorite activities include going on walks with Maddy and me in his stroller (yes I am THAT person), biting me, biting Maddy, looking super cute, and playing fetch with his favorite toy I call 'El Nino.' He hates being alone more than anything, and he cries at the window when Maddy and I leave.  He gets El Nino and waits with him at the window until we return.  He also puts El Nino in the dog water bowl every night after he's done playing with him. Another hilarious thing he does is he comes running when I whistle, which has proved very helpful in finding him when he sneaks outside or into the basement. 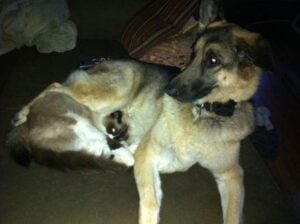 An odd thing though, is he never purrs unless he's cuddling Maddy.  I do get jealous, but I have to remember I bought Andy for Maddy, and that helps.  Maybe when he gets older he'll become more loving towards me, but I know he loves me even though he's not affectionate.  He is the most hilarious character ever, and I wouldn't trade him for a million billion trillion dollars.

I have fed him Evo Herring and Salmon formula since he was a baby and he's a healthy 11 pounds.  I think he could use more weight, but he is only 26 months so he has another year before he's fully grown.  His fur is like soft bunny fur and his tummy is warm and wonderful.  So I think Evo is a good choice for food.  His only 'bathroom' problem was when he ate one of my hair ties.  It did come out the other end, not after much howling and help from me (sorry, TMI!).  Andy the Cat. 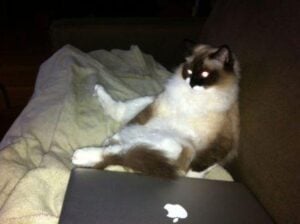 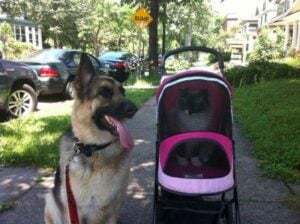