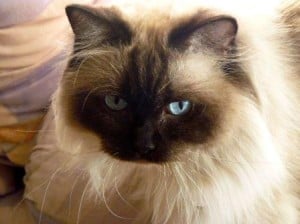 I would like to introduce my gorgeous furkid, Furrlicious Phoebe, who came to live with me in February 2011. A seal point Ragdoll, Phoebe is a retired queen and was born in May 2005. Although I adopted her from Sempre Ragdolls in Sydney Australia, Phoebe came from another breeder who had decided to quit breeding so not a lot is known about her early life. Whilst living at Sempre Ragdolls, Phoebe had 2 litters, one in 2009 with 7 kittens and another in October 2010 with 5, however one kitten died after birth. Phoebe was a prolific caller and was spayed in December of 2010. Two of Phoebe’s bubs (Stella and Ella) from the October litter are now part of Sempre’s breeding programme. 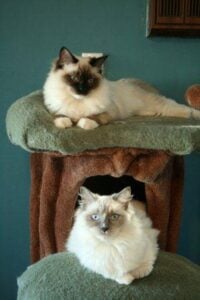 I had always had cats when I was a child but had never been responsible for one as an adult so it was with much trepidation that I adopted Phoebe. I had specifically wanted an adult cat and originally wanted a Himalayan but they seemed hard to come by in Australia so I started looking for Ragdoll instead. When I saw a picture of Phoebe on the internet, I knew that she was the one. However I do recall asking whether there was a money back guarantee! In hindsight, I did not need to worry because we bonded straight away.

When I picked her up and we drove home, she cried most of the way. She didn’t like being in the cat carrier so she was a very happy girl when I let her out into my loungeroom. My previous cats had always liked boxes so I had a box ready with a nice soft pillow in it for her bed. She had a sniff of it and then looked up at me as if to 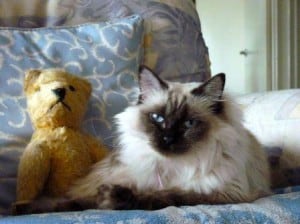 say ‘Princesses do NOT sleep in boxes’ and that pretty much summed up my Phoebe. She is an absolute princess and has the run of the house. In the study, I made a big nest using an old rug and duvet and she naps there every afternoon and evening. It’s lovely and warm and sometimes she will stay there the whole night.

The breeder told me that she talked a bit but I wasn’t prepared for the little chatterbox that she is. She NEVER stops talking. She has an amazing range of meows and chirps and she constantly makes me laugh with her never-ending chatter. 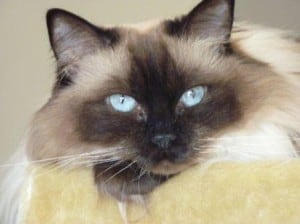 During the first couple of days, I thought something was wrong with her. After her naps, she would run around the house like a total psycho. Having no experience with indoor cats, I didn’t realise that this was quite natural. Now I really look forward to seeing her galloping around the house with her aeroplane ears and fur standing on end. When she does this, it sounds like a herd of stampeding elephants. 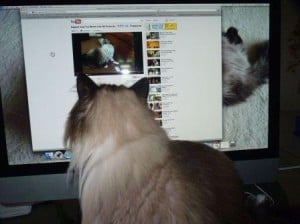 Phoebe is a very independent girl. She doesn’t like being picked up and doesn’t like sitting on laps. However she loves to head butt and sit close to me. Whenever I’m at home, she is always sitting close, whether it’s at my feet or trying to sit on the computer keyboard. She loves headbutting the monitor and sitting on the mouse so that I can’t move it around. She also loves watching Floppycats YouTube videos. When I come home from work, she’s always waiting at the door and then she follows me around and we have a conversation about what’s been going on all day. 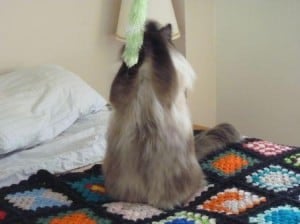 Phoebe doing her Cousin It impersonation

Her favourite toys are 4 little hairy balls that she plays soccer with around the loungeroom or I’ll throw them up in the air and she will bat them as though she is playing tennis. She also loves a stick with feathers on the end and will play endlessly with it. Most of the time though, when she chases something she just flops and sticks her legs in the air. I’m the one who has to do the fetching – she has me well and truly trained. At the moment, one of her favourite places is sitting behind a floor tile that I have leaning up against a table. She seems to think that if she sits behind it, no one can see her and she likes poking her head around the corner to see what I’m doing. It looks really funny because you can see all her backside and tail hanging out the other end.

When my brother came to visit, he had mixed feelings about me having an indoor cat however all Phoebe had to do was walk up to him, chat away and then flop at his feet - he was smitten. 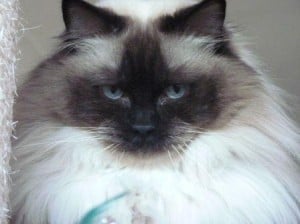 Phoebe on her cat perch

For her 7th birthday in May this year, I decided to buy her a cat tree. I found one that was quite tall and managed to get it home in 3 pieces. My friend and I put it together but I wondered whether Phoebe would like it. I didn’t need to worry because no sooner than we had it up, Madam was sleeping on the highest perch. In fact, that night she didn’t come to sleep with me, she slept on her perch and it wasn’t until the nights were getting colder that she abandoned the perch for my bed. She loves that perch and spends a lot of time on it.

Some of the names that Phoebe answers to are: Bubbachup, The Phoebster, The Phoebmeister, Miss P, Princess P, PossPoss, BunBun and Girlie. I’m not sure why I have all those names but she always responds to them.

I love my Phoebe…she is a darling little girl and an absolute delight to own.