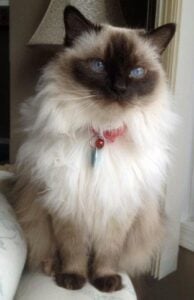 Life creates new paths for both human and man’s beloved pets.  On October 17th a niece decided that life wasn’t worth living and took her own life.  We were all in dismay and shock!  The next week my sister in Edson, Alberta, Canada sent me a message with a picture of a nine year old Ragdoll cat. She told me that the cat was going to be euthanized if a home couldn’t be found for her . The Vet in Edson had taken Sammie from the Humane Society and asked if she could try to re-home her as they wanted to put her down. Someone called her a feral cat (she had attitude) as they had to hose her to get her out of the cage. She was all matted and greasy. I know she was scared because of all the strange things happening to her.  Someone with a two year old child had dropped her off at the Humane Society. How does a nine year old cat suddenly get feral? I told my husband I was going to take her as it was 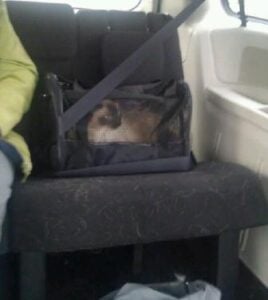 my mission to save her life. You can imagine what he said as we were already caretakers to our beautiful gentle Himalayan 5 ½ yr old  “Dai-Zee” and we are seniors.  My deceased niece loved animals and left five behind and luckily they all got loving homes so I was compelled to do this because of her.

Sammie spent two months in a cage at the Vet’s office and was close to being put down again as the Vet was having no luck in re-homing her.  This is where another niece “Sam” was called by the Vet to please take Sammie and try and re-home her.  We named our Ragdoll Sammie after our caring niece. So we said we would take Sammie but here we were 9 hrs drive away so logistics seemed insurmountable in the winter through the Canadian Rockies. As luck would have it a nephew was moving from Edmonton Alberta to Kamloops British Columbia and 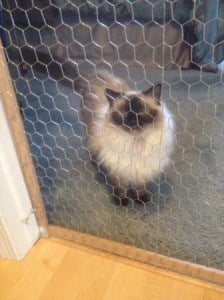 agreed to transport her. So in a short space of time Sammie was in five different locations and on her way to us. The drive to Kamloops was a straight 7 hrs and Sammie was good about it – softly meowing at times. My family then drove her from Kamloops to Vernon on Nov 9th where we picked her up to drive her to West Kelowna. She cried loudly for the shorter trip of 2.5 hrs which was too funny! Sammie didn’t smell good, was greasy, matted and needed her nails clipped. On the way home the first thing we did was stop at a pet store and buy her a tree bed.

We kept Sammie in a safe room with the door closed at all times for two weeks.  She spent the two weeks hiding in every corner.  She threw up every second day.  I rubbed both cats with facecloths and put the facecloths in their beds so they got used to the smells of each other. I also brushed and took samples  of their fur to each of them. Talk about hissing from Sammie but Dai-Zee was just curious. Our sweet gentle Himalayan lay outside the closed door at every opportunity.

We had to take Sammie to the Vet for a booster shot and of course we thought we could get her nails clipped too. The Vet visit was a disaster as she screamed and fought everyone. The dishevelled Vet came out and said he managed to give her the shot but only one side of her nails were clipped.  I had to bring her back in a month for another booster shot and he recommended a sedative. 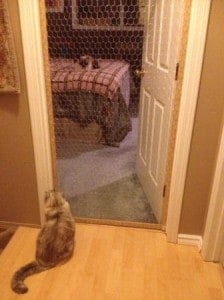 Meanwhile through another sister taking in the two cats from her deceased daughter’s household I learned about the chicken wire door that they had built and were using as they now had two new and three resident cats to introduce. It was a huge success! So my husband made a 5 ft high wooden frame and stapled the chicken wire to it. He then put two eye hooks on one side and we could latch the screen. The other side was butted against the door frame. Keep in mind this was on the master bedroom door but we managed to easily take it off when we wanted to go in and out.  It was very light as my husband used trim for the frame.

Now the cats were looking at each other every day.  Sammie still from up high hissing and growling and Dai-Zee enthralled at seeing her. We left them alone as Sammie was hiding less and had started using her tree bed.  She would come to the screen to see what Dai-Zee was doing.  I would let Sammie out into the house when Dai-Zee was sleeping in the basement so she became familiar with everything. We called Dai-Zee the friendly stalker as she was always running upstairs to Sammie.

Sammie did not seem to know how to play with any of the toys so I started playing with her and slowly the happy light came to her eyes.  She eagerly looked at the toys and me for play time. She loves the feather wand!

This went on for a month until we took Sammie to the Vet for another booster shot and blood work. This time with sedation we got the shot, blood work and nails clipped.  The Vet was amazed at how much her looks had changed. Thankfully the blood work showed a healthy cat. 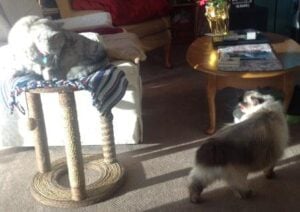 After the Vet visit I started giving the cats treats together at the screen.  It was constant repetition using the word “treat” over and over again.

Then because they started touching noses we decided it was time to take the screen down just before New Years (took seven weeks).  Sammie still hissed and growled and Dai-Zee was wherever Sammie went.  Dai-Zee is truly the friendly stalker as she has never made a sound.  She has even fallen asleep in front of Sammie.

Sammie now tolerates Dai-Zee and we feel that once she is totally stress free that they will be sleeping in the same room and we will have the master bedroom to ourselves once again. Our goal is one year but it could be a lot sooner. It takes patience, lots of petting and soothing words and love. After the first two weeks and being hissed at my husband said “I don’t like her”. Now she has won him over and she is as special as our Dai-Zee is to him.

The latest picture of Sammie shows a  contented bright eyed Ragdoll with sparkling fur. A lot of family (a niece,a nephew, 4 sisters) were involved in this happy story and I am very grateful to them all. Plus of course the caring Vet who took the extra step to save “a cat with attitude!”. 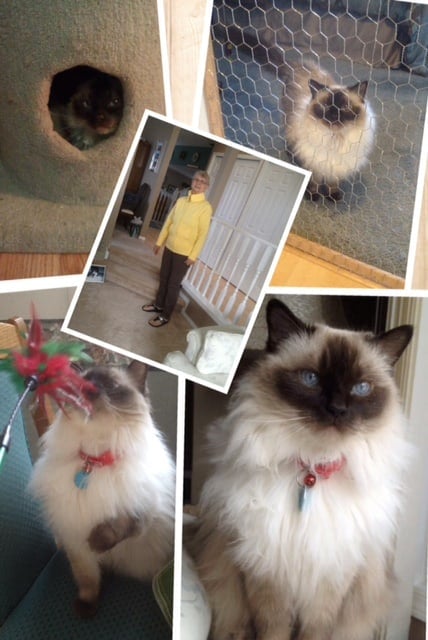 22 thoughts on “Sammie – Ragdoll of the Week”