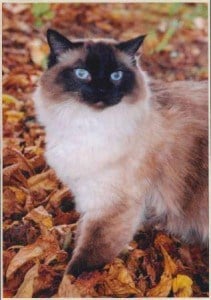 How you got your Ragdoll – was it rescued or from a breeder?

I got Crumble from a breeder in Dorset, England.

If you got your kitty from a breeder, who was it and would you recommend them?

Her name was June Rigler of Ragtime Ragdolls. I would highly recommend her - she was very helpful and all the Ragdolls in her care were happy, healthy and well looked after. 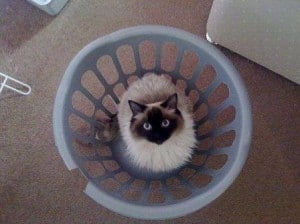 I have wanted a Ragdoll ever since I was little. I fell in love with them when I saw Homeward Bound in 1993 (I was ten) and decided then as soon as I got my first home, the first thing I would get would be a Ragdoll. I did, and I've never looked back since! Although I feel as if rather than moving Crumble into my home, she moved me into hers. She definitely owns the place! 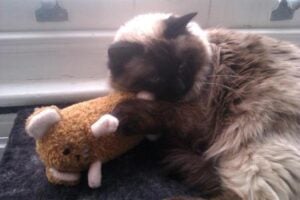 How old is your kitty? When was your kitty born?  Have you had your kitty its entire life?  In other words, since s/he was a kitten?

Crumble has not long turned two. I got her when she was 14 weeks old (the breeder doesn't let them go any earlier). I had to drive three hours to Dorset (I live in Brighton) and when I arrived she was rolling around on the floor with a little boy kitten, chasing a ball and trying to outrun him. I remember how tiny she was and how she fitted in the palm of one of my hands. I'd already decided I was going to call her Crumble and had pre-chosen her already: I'd told the breeder I wanted a female Seal 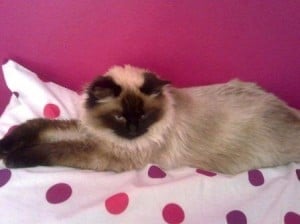 Colourpoint and Crumble was the first one to come from that litter so had been 'on hold' for me until I could make the drive. My favourite part of meeting her was when she ran off chasing the ball and I went after her and called, "Crumble?" and she turned around and miaowed at me. She was definitely my cat then and there 🙂 My friend and I then drove her home and the entire journey she spent with her little paw sticking out from between the bars of her cat carrier, holding my hand. 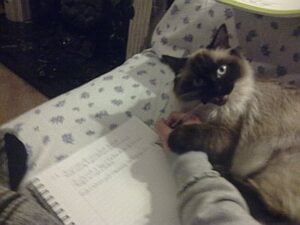 She loves to attack feet. I'd say that's pretty much her favourite pastime. She dives on my feet and starts chewing away on them, and any attempts to get her off only seem to fuel her interest. She also insists on sleeping on my pillow, despite her own Crumble shaped pillow sitting right beside my head. She'll start off on hers at bedtime, then gradually as the night progresses she'll make her way slowly over to mine. Typically, by the time I wake up in the morning she's sleeping across my face. I actually can't remember the last time I didn't wake up to a mouth full of cat hair. Crumble also enjoys a good pen chew, 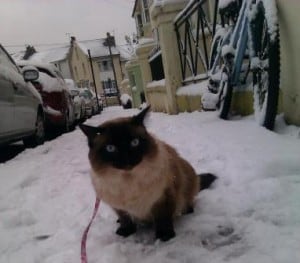 particularly when I'm trying to study. She's also very keen on being taken out for walks on her lead, and up until a few months ago she was a registered 'Therapet' at a local old folks' home, where she was very popular indeed!

How did your kitty get his or her name?

I don't really know why I'd settled on her name but that was going to be her name ever since I was a little girl. Initially I was meant to get two Ragdolls, a girl and a boy, and they were to be called Crumble and Puff. I decided I didn't quite have enough space for Puff just yet, but I'm hoping to get him next year! 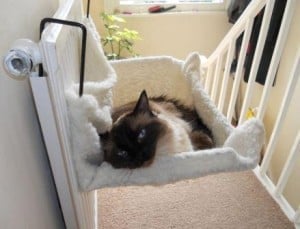 Do you recommend any food, toys, beds, etc. to other Ragdoll owners because your kitty loves them so?

Crumble's favourite food is always whatever I'm eating, but she does also love Applaws natural cat food, and in terms of toys she's currently loving her mesh tunnel which she got for Christmas.  She also always loves her sponge balls, which she carries around in her mouth and pretends she's a dog. 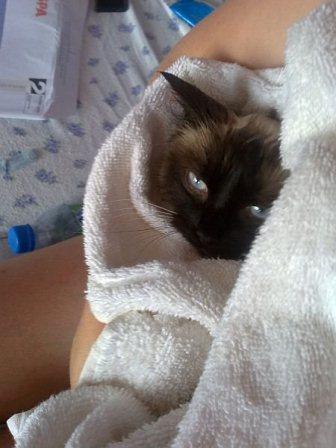 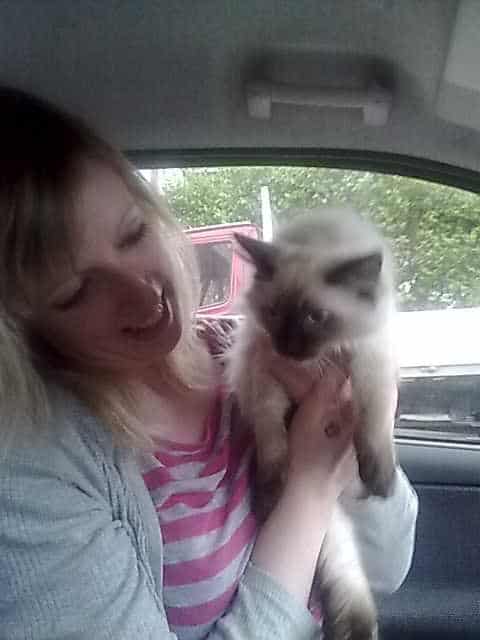