Mylo aka the Big Kitty 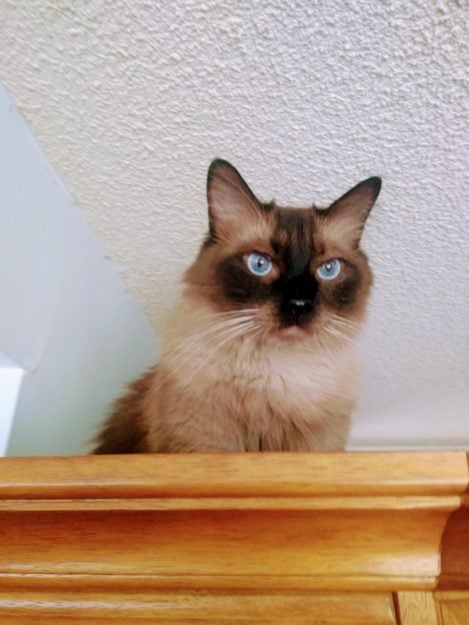 Mylo is almost 7 years old, and our family has had him for just over two years now. We adopted him because he needed a new home and our other cat Sofia was lonely. I am still friends with his former owner, who had him from a kitten and says his parents were purebred Ragdolls. He doesn't have papers, but his parents did. We were devastated by the sudden loss of our 11-year old Ragdoll from a bleeding spleen most likely from cancer. It worked it well that Mylo needed a home where he could get more people time, and we were looking for another cat. His name is from the band Coldplay. 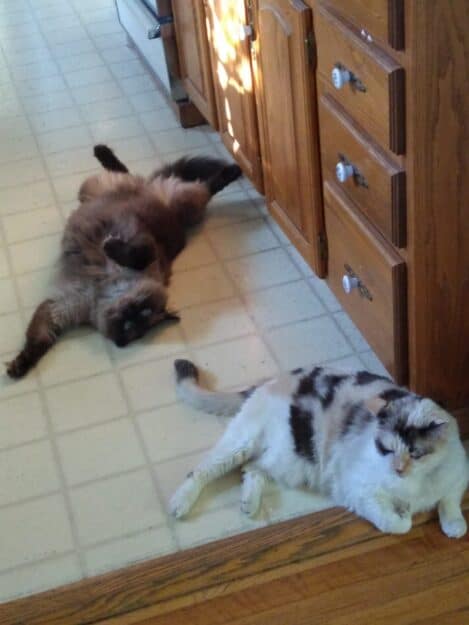 Mylo gets along well with our calico part-Siamese Sofia and she accepted him rather quickly. They have a tolerant sibling relationship, often chasing each other around, although Sofia is definitely the boss cat despite being a much smaller cat. (Mylo is a big cat, he is almost 18 lbs, and when he stretches out on the floor he fills a doorway.) I have seen them washing each other's face, but then Sofia usually bops Mylo to make a point of who is in charge. Mylo is a very social cat, likes attention, loves his belly rubs and does follow us around when we are home. I seem to be his favorite person, and after I get home from work he always tells me his sad tale of woe, sounding like a husky talking "meo-oow-ooh-oooh- oh". It's a whole whining woeful conversation, and so funny. He loves to be brushed. He is the only cat I have ever seen that likes rough scratching on his back like a dog does. 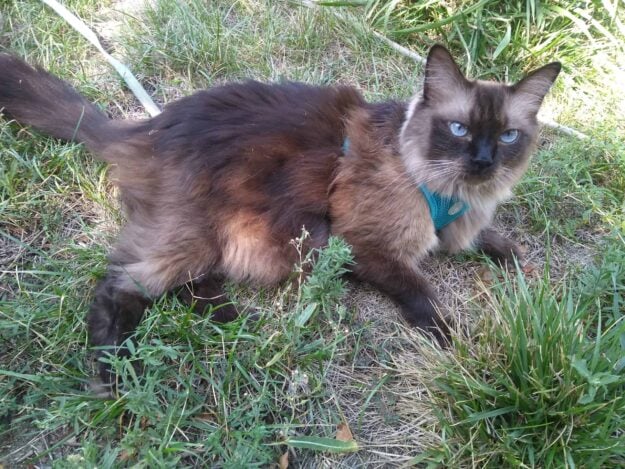 My cats both enjoy escorted time outside in our backyard. Mylo mostly sits in the grass, and enjoys eating the purple wildflowers and watching the birds. He had been a mostly indoor cat, and took to wearing a harness and dragging a long rope with ease. I am amazed at how mellow his personality is, because the harness was never a thing, and there was no adjustment period. He doesn't like thunder, or dogs but is largely not concerned about the vacuum. 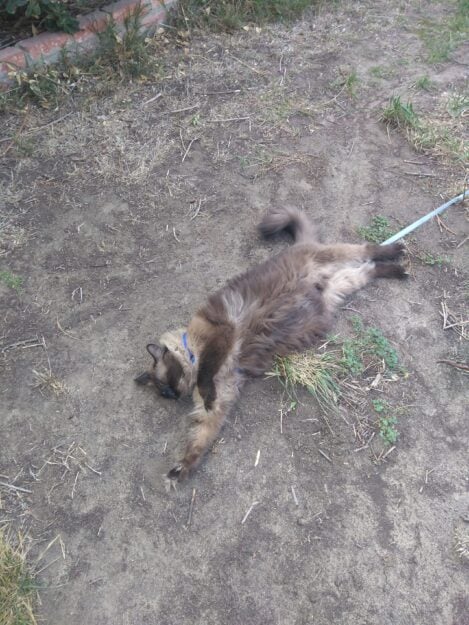 He is very smart, and enough of a curious mischief maker that I have to use baby locks on my cupboards to prevent cat rummaging. I also have to put water jugs in front of the cupboard doors in our kitchen and bathrooms to prevent him from opening the door just enough to get his whole leg inside to destructively swipe around with a big fluffy paw. Mylo has a weird habit of eating post-it notes, receipts, packing tape off boxes, the glue on envelopes and such, so we have to keep those things in recycling or weighted down where he can't get to them. I have also wrapped all the cord on my cat toys with duct tape so he can't chew through them. 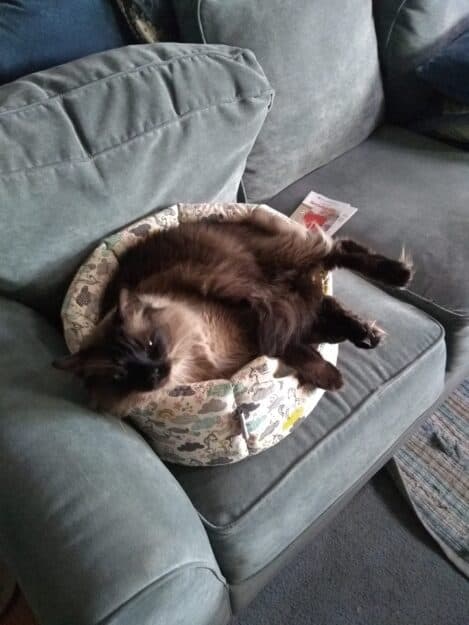 After watching him scoop his dry food out of the bowl and onto the floor before he eats it, I purchased a dog puzzle toy from Amazon, the one with the spinning stacked layers that floppycats.com reviewed a couple years ago. He now moves the parts around and no more dry food on the floor. I feel it also gives him something to occupy his mind. We have a large flat box with packing paper layers on it for kitty rummaging and noisy paper hide and seek. Both my cats like it. They climb and hang out on my two cat trees as well, and like to look out the window at the world going by. I have one cat tree next to our entertainment center, and the top gives the cats another level of sleep space and watching the world. I think they like to sit there where the air vent blows on them to warm up or cool off depending on the season. Mylo tends to be a horizontal scratcher, I noticed because his favorite S-shaped carpeted cat furniture came with him, and he uses it daily. I got the Necoichi cat scratcher bowl after seeing it reviewed on floppycats.com, and Mylo is a big fan. I am on my third insert in two years, even after turning them over to use the other side. Both cats curl up in it as well. 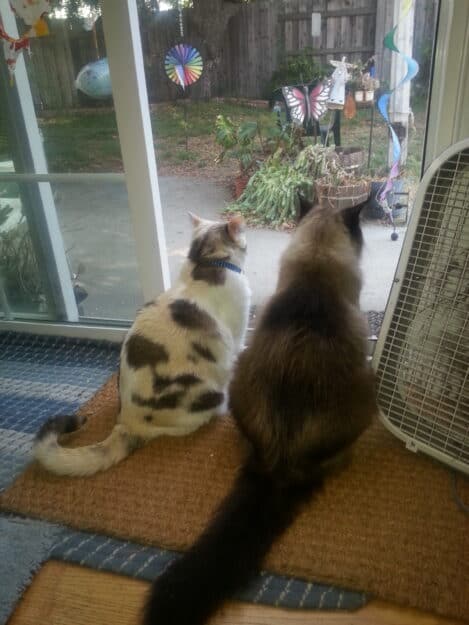 I love the Ragdoll cat's relaxed people friendly personality. Mylo is a wonderful addition to our family and a good friend to all of us. Despite paper eating and small trashcan dumping when he is mad or bored, he is a great cat. He is sweet, friendly, and loves attention, what's not to love? 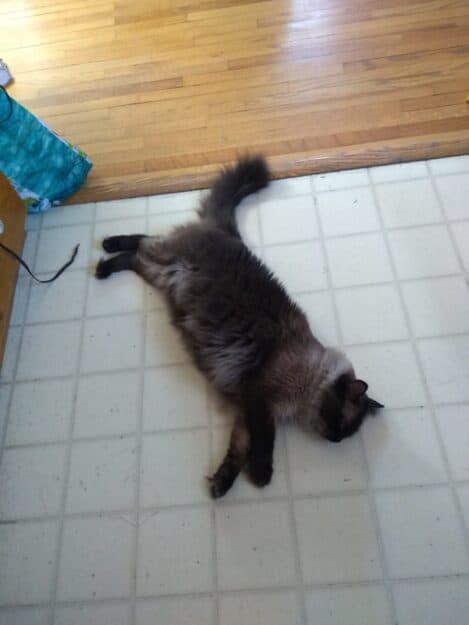