Back almost two years ago I was introduced to my first Ragdoll who was a beautiful Blue Bi-Color which belonged to my friend Roxanne.  She had told me about how wonderful “Raggies” are and that with my previous experience of a shelter kitty it would be a totally different experience. My previous boy was Schizo and would attack me for unknown reasons but most of the time it was because something dropped or there was a loud noise.  I had him checked by the vet and he was otherwise healthy but he had a chemical imbalance.  So I had him for 10 years until one day he sent me to the hospital.  At that point I had no other choice but to have him be happy in heaven.  I was extremely upset and traumatized by this experience and wasn’t going to get another cat even though I love animals a lot. 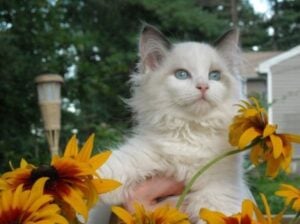 But after a year Roxanne convinced me to meet her lovely little girl and I fell in love.  She was everything she said Ragdolls were supposed to be.  She is loving, loyal, easily to maintain, and go limp in your arms, hence the name Ragdoll.  The biggest concern I had was the maintenance of the long beautiful coat, which by the way is so easily maintained.  Ragdolls do not mat easily like other long haired cats like Persians or Himalayans. Also their color does not completely come in until they are around 3-4 years old.  So it is fun to watch his color changes.  You can notice with some of the pictures that his color is coming in.

Finally I gave in and decided to look into buying a Ragdoll from a breeder.  I was introduced to Ken Staples who is the breeder for Kasseldolls Cattery in Woonsocket RI.  I met him at the Providence Pet Expo where they were conducting a cat show within the Expo and he was showing a few of his cats and kittens.  He explained all of their features and what patterns and colors they come in so that I could decide what I wanted to get.  Ken was very patient with all of my silly questions and just loved to talk about the breed.  I would recommend him to anyone interested in getting quality Ragdolls.

So I made a decision of what pattern and color that I wanted. Ken had told me that as soon as he had a kitten he would contact me to come over to his cattery. Well that time finally had come and when I had walked in, there was this little ball of fur playing with my sneaker lace.  I picked him up and he just started to kiss my face like a dog and Ken then said that he is the one that he thought I might want.  I felt honored that Sergio picked me.  It made my decision much easier even though I would have taken home all of the kittens. 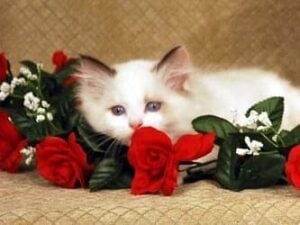 Sergio as a kitten

Until he was old enough to go home with me, I would hear the stories of what a little trouble maker he was.  He would teach all of the other kittens how to get into things they weren’t supposed to be in.  The day he was to be spayed he disappeared for about 5 hours and Ken looked for him everywhere until he saw the silk flowers in a vase moving.  He went over to check out to see what was making them move and Sergio’s head popped up.  So at that time I really didn’t know what I was getting myself into…LOL. 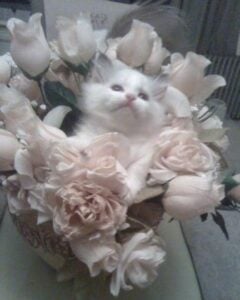 Sergio as a kitten

The next task was to pick out a name for the little cutie.  Sergio got his name from a special person that I met when I had visited Italy some years ago.  I just loved his name and thought that his name was so suave and classy. When people learn his name they usually smile and ask about it because it isn’t a common name in the states.  But that is not the only name he goes by.  I also call him Bubby or Bubba when he is being cute.  And when he is misbehaving usually it is Hey Freshie… 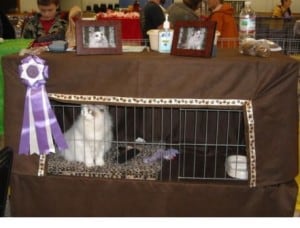 Sergio at a cat show

I wanted to keep him socialized especially after my past experience, so I contacted Ken and asked him about entering him into a cat show.  Ken was great and showed me the ropes.  Sergio can’t compete in the Ragdoll division because unfortunately he has a white tip tail and white on his ears.  This would disqualify him so he competes in the Household Pet division.  Sergio just loved it and received his first title by the end of the first day.  He was the little charmer and the judges just loved him.  I continued to show him for the rest of the show year and in only eight months he now has all of his titles in the Household Pet division for the Cat Fanciers Federation (CFF).  Sergio also received the 3rd Best Household Pet for the entire show year 2009-2010.  It was a wonderful experience and I have met a lot of wonderful people.

Sergio just loves to run around the house. He crashes into my couch every time and if he jumps up he crashes into my window.  Now I don’t claim that he is the smartest cat but I love him anyway. 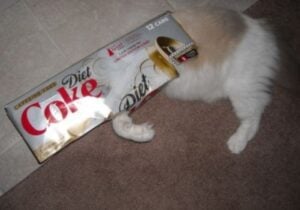 Sergio’s newest toy is his Catnip Banana from Yeowww.  Cat drugs are always a hit.  He rolls on it after carrying it around the house. He also just loves to play with anything that has feathers on it. He thinks he is the greatest bird hunter in the world.  He has a toy that is a fur type ball with a bell inside which has a string and feather on it.  He loves to take the toy by the string and toss it in the air and try to either bat it or catch it with both of his paws.  It is hysterical to watch the concentration he uses.  Sergio also loves the laserball in the circle track.  He will flop onto the top of the track and just push the ball from one paw to the other one.  It is amazing to see what he finds interesting.  But the best toy of all is the box that my new vacuum came in.  He just loves to hide in there and jump out to scare me.  Call me the crazy person but I still have the box out even though I bought the vacuum last summer. 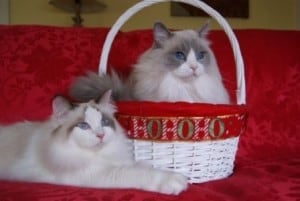 Sergio and Lila James posing for Santa - Sergio on left.

Sergio has a little girlfriend that he loves to go and visit every couple of weeks.  My friend Roxanne’s Ragdoll named Lila James just loves to play with him.  He has play dates and sometimes gets to sleep over.  He just walks in and is right at home.  It is great to see them play with each other non-stop.  They run so fast that they slide the throw rugs across the room and then the drop and fall asleep together.   It is amazing that these two cats that don’t live together get along so great.  Roxanne and I take them out in their cat strollers and walk along the beach walk.  We always get looks when people pass.  Some of the people think it is so cute while others think we have lost our minds.  It doesn’t bother me at all.  I kind of like to see the different reactions. 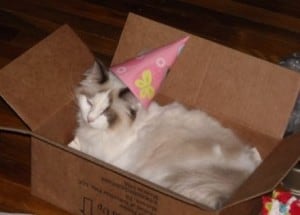 When Sergio turned One I had a birthday party for him.  I invited all of the people that were important in his life.  Okay, well they were my friends.  We had a wonderful time.  We ate, drank, played pin the tail 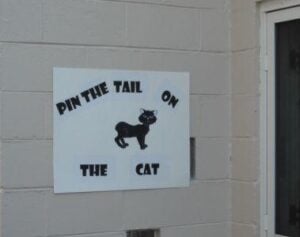 Pin the Tail on the Cat

on the cat, and of course had cake and presents.  At first my friends thought I had lost my mind but they took it in stride.  They let loose and enjoyed the day. 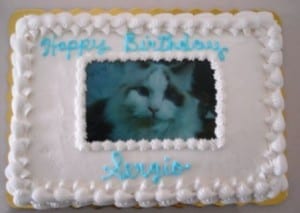 Because of Sergio, I not only have the best kitty in the world but I have had many wonderful experiences and met many new friends because of him.  He is the world to me and I don’t know what I would do without him.  We are now waiting for a new arrival of a brother or sister for Sergio to play with.  I am looking forward to having many more new adventures with the both of them.