×
Home » Cat Product Reviews » Cat Litter Box
Floppycats reader, Kristen, wrote me to tell me that she had posted a review of the Litter-Robot Open Air in the Ragdoll Cat Group on Facebook - and sent me a screenshot of the posting - which was super kind of her. She then sent me a more thorough review a few weeks later, so I asked her if I could publish it on the site. She agreed!  I love when I get thorough reader reviews like this one to share.  Here was another reader review of the Litter-Robot Open Air. 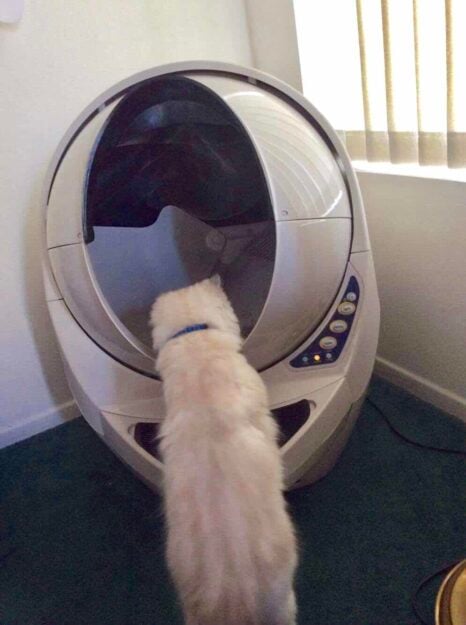 "Now that I've had the Litter Robot for a couple of weeks now, I thought I'd write a more thorough review.As a previous dog owner, Maui is my very first cat. Previous to then, I had never really been around cats at all. Though Maui has been an amazing ragdoll, the worst part of cat ownership is scooping litter. I would scoop 2 to 3 times a day, and dreaded it each time. The regular litter box smells as we don't always see Maui go or we are not at home. We were constantly deodorizing the box with citrus baking soda to help with the smell. I then really considered the Litter Robot, having seen Jenny Dean review it on Floppycats. Now, even though the $449 USD seems like a lot, it isn't! I imagine never having to scoop again for $449, and the elimination of that litter box smell. In addition, if I was gone for a longer period of time, I did not have to worry about cleaning the litterbox for fear that Maui would go outside if it wasn't clean enough. I was sold. 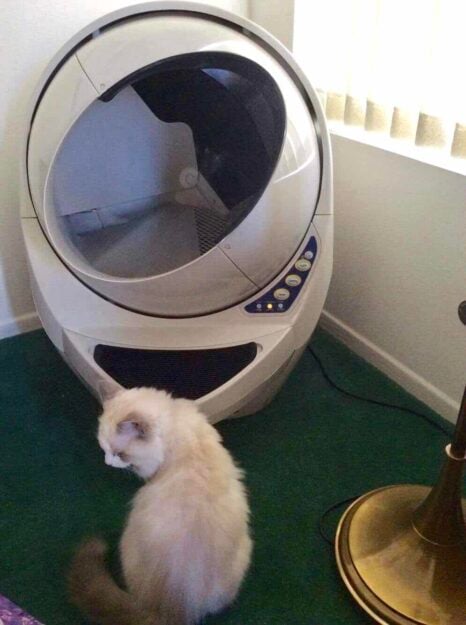 I used the Floppycats link for the $25 savings, bringing the cost of the machine down to $424, and the robot arrived a few days after. I opted to buy the 3 year extended warranty, there is a savings if you buy the warranty at the same time as the robot. It costs $49.99 instead of $99.99. My husband set it up immediately. The robot is a big machine and would not fit in the guest bathroom where the litter box was previously. Our house is tiny, about 1000 square feet, so we just put the robot in the living room right next to the television. It's not the best place, but no one can tell what it is at first glance, it does look like my toddler's space toy or something. We used the clean but old clumping litter from Maui's previous litterbox. Maui started using the robot immediately. We were pleasantly surprised. The robot cycled the litter after Maui pooped and peed. The clumps dropped into the box below and the robot was all ready for its next use. Amazing. We left the old litter box in the bathroom, just in case for a couple of days. We then took it away and Maui used the robot exclusively. He has had zero problems. Keep in mind that for the automatic sensor and cycling to work, your cat has to be 5 lbs. Maui was 5.6 lbs when we started using the robot, so sometimes he would not set off the sensor. No big deal as we ended manually cycling it. This week, he is heavier so it's been automatically cycling.

The robot saves so much on litter. The manual says to use about 8 to 10 lbs of litter or 1.5 gallons by volume. My old very large litter box took 25 lbs to fill because i always wanted the recommended 4 inches of litter in the pan. When I was scooping, I would over scoop and throw clean litter away as I tried to do so as quickly as possible. I can already tell the robot will save tons in litter costs for me. The first month of owning Maui, I had already purchased $50 in cat litter. The robot itself uses very little litter and throws only the litter that clumps out. Even though the initial cost is a lot, I see the robot paying for itself within a year or two. I only refill the robot every 2-3 days with just a bit more litter to fill the litter line inside. Emptying the robot out is super easy, the trash bag lining covers the drawer at the bottom. You simply take it out and put the new liner in. I usually empty the drawer out twice a week, and do not wait until the robot tells me to do so. Initially, there was no smell, but if the drawer is not emptied in a few days, I can smell something slightly. Keep in mind, it's been over 100 degrees where I live. I bet i will be able to get away with emptying the robot less frequently in colder weather. I'm thinking of adding something to the drawer to neutralize the smell a bit so I don't have to change the liner twice a week. Also, you can definitely use regular 10 to 13 gallon trash bags and do not need to buy the robot brand bags.Because I don't have to scoop litter, I considered and then put a deposit down for a second ragdoll kitten. I no longer have to dread this part of cat ownership, and Maui will soon have a sibling. This makes all of us happy. If you're thinking about the robot, I say get it!!! I doubt you will be disappointed. Make sure you read all tips on getting your cat to use the robot. My Maui is pretty easy going, and he took to it in no time.Here's the link from Floppycats that will give you $25 off" 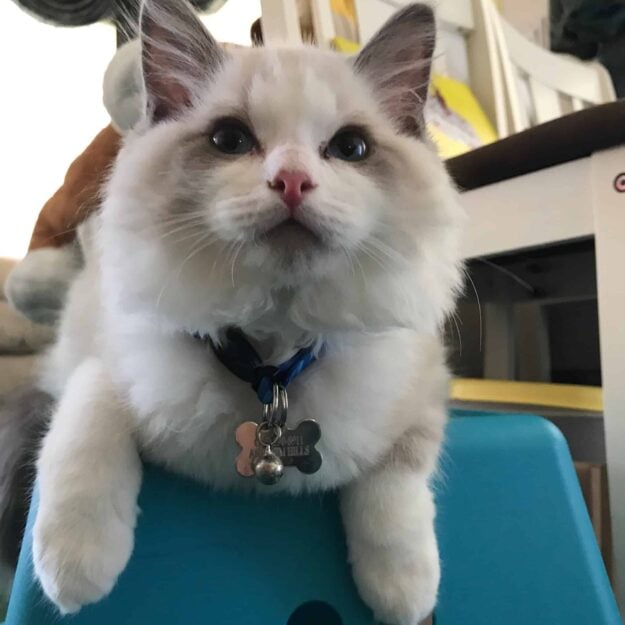 Do you have a Litter-Robot Open Air?  How do you like it?