I became interested in Ragdolls during a time when my Husband and I were looking to give a home to a kitty, but it had to be a different type of kitty. We looked at Bengals, Siamese, Savannah, Himalayan, Persians etc, but there was something really special about the Ragdoll breed. Their temperament, coloration and their size was very appealing to both of us. And to make another long story short, that is how Rochelle came into my life. 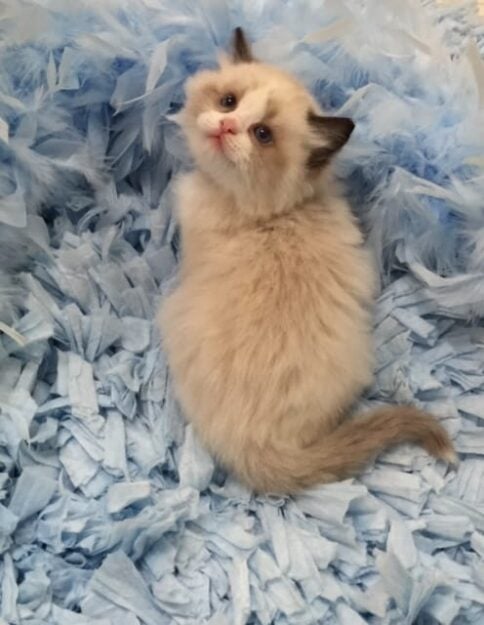 Charlie a Seal Bi-color Ragdoll with a beautiful little white tipped tail was born Feb 1st, 2016 and is currently 17 months old. Some people have a hard time seeing him as only a 17 month old kitty especially when he can easily stand a head above the dinette table. Just make sure the butter is not too close for him to reach haha. 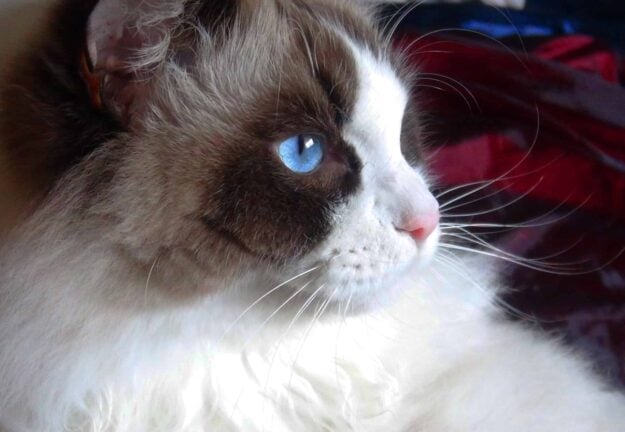 I adopted Charlie form a wonderful breeder Lora Tesh of Soulmate Ragdolls. I currently had a 3-yr old retired queen Rochelle, and I felt she needed a little brother. Rochelle was not a Soulmate, and after doing a lot of research regarding Lora, her cattery, her cats lineage, and genetics, testimonials and most importantly seeing how regal Floppycats Charlie and Trigg (also from Soulmates) were, I knew I would have my best chance at finding exactly what I thought I was looking for from Soumate Ragdolls in North Carolina. I contacted Lora, fully expecting to leave a deposit and start the long wait. After some communication, I explained to her what I was looking for. I had seen a photo of a little male seal point called Einstein advertised on her page, and since Rochelle was a seal point, I thought it would be a perfect match. Then Lora told me she had a beautiful little boy who was a seal bi-color called Charlie. It was at that very instant, I knew he was meant to be part of our little family. Charlie just happened to be my late husbands nickname (Good Time Charlie). We always believed that things never happened without a reason, and Lora telling me about Charlie was perfect timing. 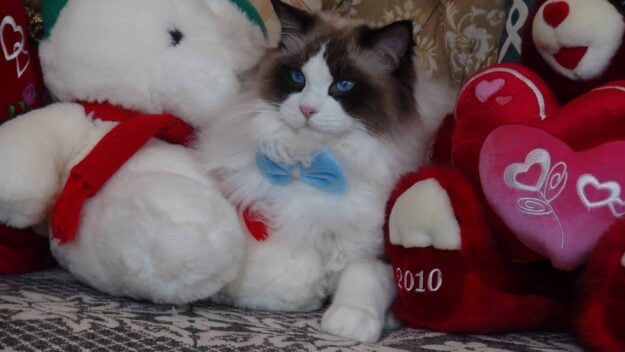 Within three weeks, he was home. During that time I stayed in very close contact with Jenny for advice on everything from introducing Rochelle to Charlie, his safe room, everything I needed to know, Jenny was right there every step of the way. There was no question big or small that was unanswered. I also got a copy of her book, "A Ragdoll Kitten Care Guide: Bringing Your Ragdoll Kitten Home". The information was invaluable. I do believe that introducing them went so well due to the advice given by Jenny through Floppycats. 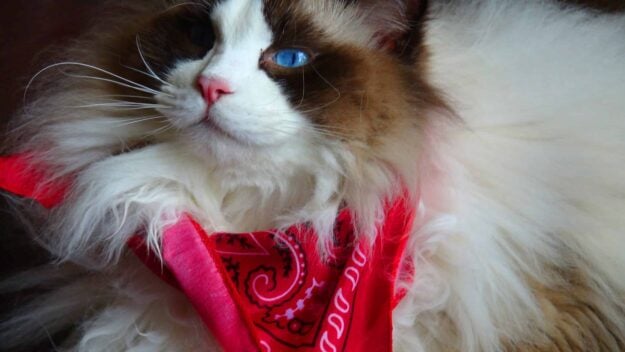 Charlie was a real ham from day one. Always had to be out in front and center. My Husband had a passion for film and photography. He had wanted us to make YouTube videos for a long time but unfortunately, we never got that chance. Since Charlie was such a character, I decided to honour my Husbands wish to make YouTube videos and I started making fun little adventure films of Charlie and Rochelle. We started a little YouTube channel called Rochelle and Charlie, My Ultimate Ragdolls. 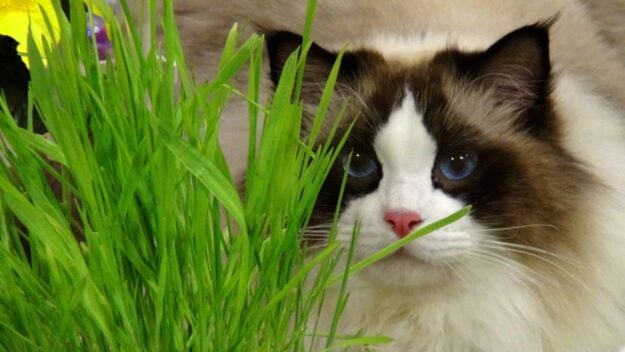 To this day he still wants to be the boss, and he loves to show off in front of the camera, which, at times is quite hilarious. Since we make so many tiny vids and tons of photos, I started a Ragdoll Cat and Kitten page so I could feel free to add as many pics and vids as I desired without driving my regular FB friends crazy with Charlie and Rochelle media. That FB page is RagdollFriends. 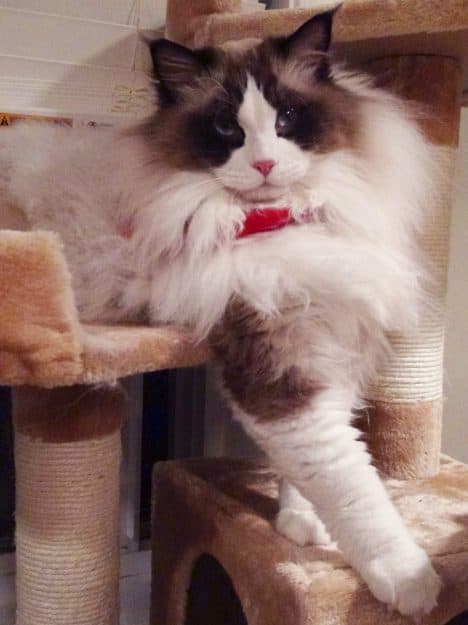 Charlie has brought so much love into our little home, that a year later I decided Rochelle needed a little Girl Power, so we are now bringing home our 2nd Soulmate ragdoll called Rosey. I am also conditionally set to do an interview in August with Rumble regarding the kitties and their YouTube channel as well as to answer questions about how and why I chose the breeder of whom I would highly recommend to anyone looking to add a new kitty treasure to their lives. 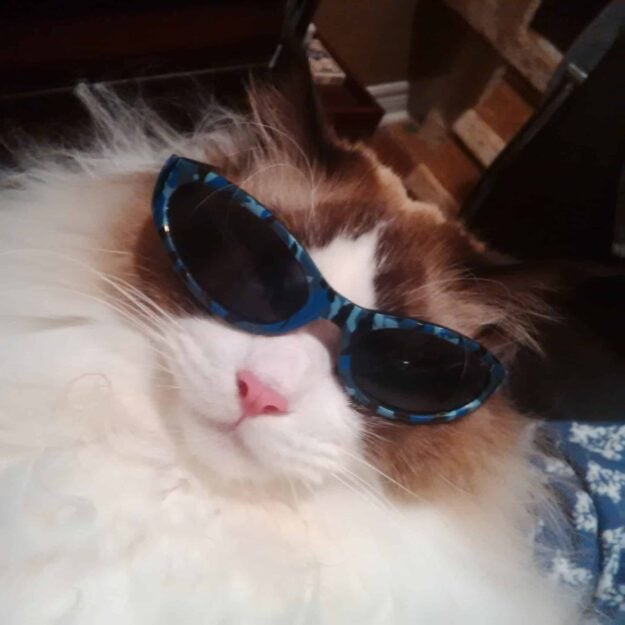 My life has improved immensely since having Rochelle and Charlie. They know they are the World to me. We have our regular routines of play, groom and more play. Sometimes I think they look at me more as a toy. All in all they have been a blessing to my life and Floppycats has been an ongoing blessing to be able to make it all work so smoothly. 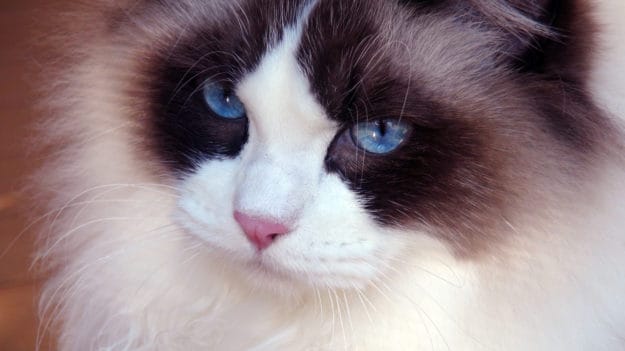