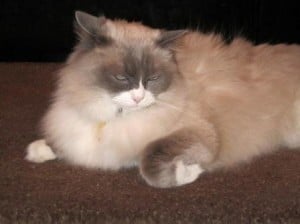 You may have seen that the Algonquin Hotel recently adopted a new feline, Matilda III.  After 13 years as The Algonquin’s most famous resident, Matilda II advised her primary care givers that she would like to retire and name a successor to her “throne” (a small chaise longue in the front entry of the 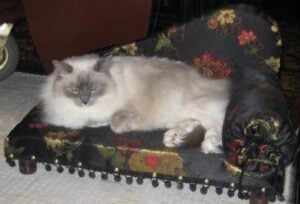 Matilda II – or Tilly on her throne

hotel).  Matilda II – or Tilly, as she is affectionately referred by her friends and fans – informed General Manager Gary Budge and Executive Assistant Alice de Almeida of her retirement and asked that a new Matilda be found through the hotel’s “pet” charity, North Shore Animal League America. 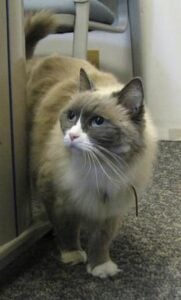 After an exhaustive interview process, Matilda III, a 4-year old Blue Bi Color Ragdoll cat, was chosen to take her rightful place as the new “Algonqueen” at New York City’s most historic hotel.  Matilda III was abandoned at North Shore Animal League America in October, and she came to the Algonquin December 10th.

The tradition of having a feline resident at The Algonquin began in the 1930s when a straggly stray cat wandered in through the hotel’s front door looking for food and shelter. Owner Frank Case, the consummate host most famous for first welcoming Dorothy Parker and her friends to start the legendary Algonquin Round Table in the hotel’s bar, welcomed the cat as he did every other guest, and a tradition was born. (All the male cats at the Algonquin are named Hamlet – the girls are all Matilda.  Hamlet is for when Barrymore was playing Hamlet.  Matilda’s origin is unknown.) 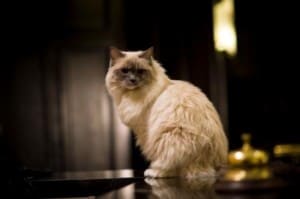 Matilda II came from the Villaroyal Cattery in Rochester NY.  The General Manager at that time had knowledge of Ragdolls and knew someone from Villa Royal though this is not confirmed.  A new Ragdoll was the preferred choice to continue in Matilda II “paws” and coincidentally Matilda III showed up at North Shore Animal League America. 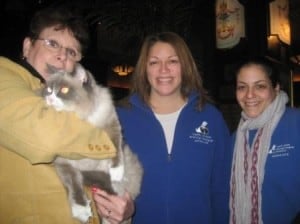 Alice de Almeida of The Algonquin Hotel, Matilda III, Devera Lynn, VP Communications for NSALA, and on the right is Dorit Shevach, Feline Behaviorist for NSALA

Matilda III has already begun her residency at The Algonquin. Tilly, who has announced that she will retire to a stunning pre-war classic in Brooklyn, left behind her legendary chaise longue for Matilda III to enjoy, and advised her successor on the best corners of the hotel for napping (behind the front desk computer); people watching (the luggage cart by the door); and hiding from the paparazzi (the coat room).

Matilda III – from here on known simply as “Matilda” – is eager to pick up where Tilly left off, manning her Facebook (Matilda Cat)  and http://twitter.com/algonqueen pages, and answering fan mail from all over the world (via her email address [email protected]).