2015 was a bad year for me, I lost my best friend, and then months later my mother, and then a week later, I lost the darling cat she’d adopted for me.

Although AnnaBelly was not a Ragdoll, she might as well have been, with long fluffy black and white fur, and the calmest demeanor, anyone could pick her up and drape her around their shoulders. She was one of a kind.

Months passed and I needed a new furry best friend, and I’d never adopted a purebred before but the more I’d read about Ragdolls, the more I was intrigued. I did my research and found a great breeder and she had a litter coming up.

I picked out Tristan because he was a flame point and my friend that passed away (also Tristan) had a bit of ginger in his hair too. I brought him home and he healed my broken heart.

In 2018 I lost a baby. Heartbroken again, I knew I needed another creature that needed me too, so I started looking for a rescue. On the off chance that my breeder might know about Ragdoll rescues, she actually had a seal point that she had just taken back from the owner because they didn’t take proper care of him.

And he was truly Tristan’s little brother because they share the same father. Malcolm came to me matted, with an eye infection, underweight, and without his first year of kitten shots. He was perfect to me. I nursed him to health and his body lying against my chest filled my empty spaces.

I wondered how the two would get along, I’d introduced cats to each other before and was prepared for a bit of hissing and territorialism, but they seemed to know each other. They sniffed, and next thing you know the two of them were running around playing, chasing each other, grooming each other, and basically acted like brothers. I’d never seen anything like it! 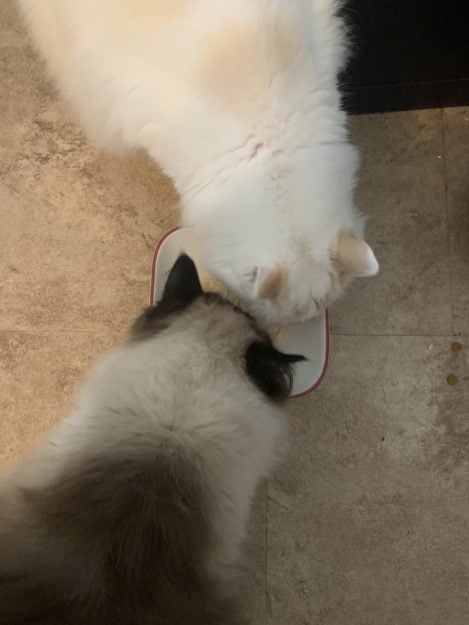 My boys are a great mix of playful and chill. I work from home and Tristan often lies on my bed behind me while I work at my desk. Malcolm loves hiding inside cardboard boxes, and the two of them get the crazies and chase each other around or wrestle.

Malcolm is still very much my baby and he’ll lie on my chest during video meetings and everyone comments on how chill he is – my coworkers have never seen a cat act like a baby. When I first got him and he was sick, I used to wrap him in a baby sling and carry him around while I went about my business.

They’re different as night and day – Tristan loves to climb high onto bookshelves or a cat tree, while Malcolm tends to prefer to stay on the ground, on his cardboard scratcher, or in a good box, and always on my laundry! 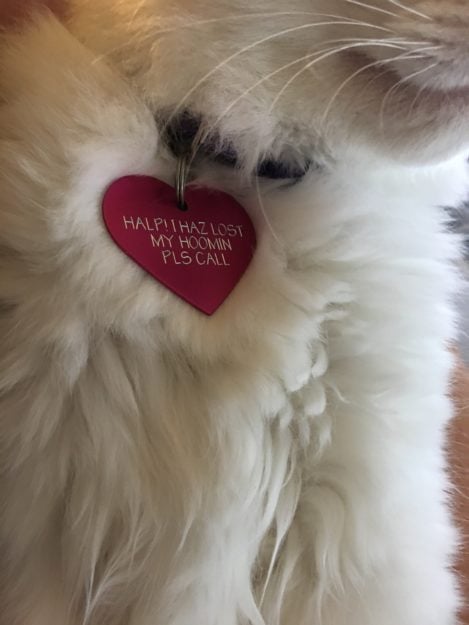 Tristan is crazy for plastic bags, he just puts little teethmarks in everything and often I’ll pick up a shopping bag only to have the handle disintegrate in my hand. They both love the laser and crinkle balls or wadded up paper. Now that I’ve got my floppy babies in my life, I can’t imagine NOT having Floppycats.

4 thoughts on “Tristan and Malcolm – Ragdolls of the Week”