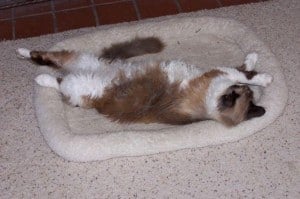 So my story is about my Murphy he is now 2 years old, he is a Red bicolor boy.  His breeder is Finer Point Ragdolls, Mary Ann Blasso, here in No. California. She also shows her cats.  And has babies for sale now.  But my story really begins with my first Ragdoll Buddy.  I lived alone and was going through a very hard time emotionally.  I went to the animal shelter in the bay area and found Buddy.  I knew I wanted an adult cat, male but I had no preference to breed or color, I wanted a 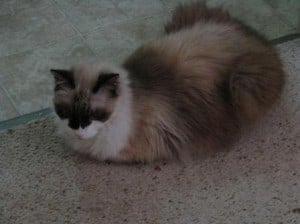 love bug, mellow cat.  He was very quiet when everyone else was all stressed in their cages.  He gently played with me through the bars of the cage.  He was huge and had the most beautiful blue eyes.  I tried to hold him but he was so big he didn't fit on my lap but he endured it.  Any way, I didn't take him that day.  I came back the next day and got him.  The shelter gave me instructions and said he would need to be in a closed room to help him adjust.  Well, that lasted for an hour maybe.  He just took over my apartment, and it was like he had been with me all his life.  I figured out that he was a miss marked seal bicolor Ragdoll.  The shelter said he was 5 years old, but when I took him to the vet for his check up, he said he was closer to 10 years old.  I didn't care except that I knew I would have less time with him.  I loved him so much.  In September of 09 I had to put my best friend down.  He had heart failure and they couldn't help him.  I had Buddy for 11 years.  This was the hardest thing I have ever had to do.  I had to stay in the room with him I just kissed him and petted him and told him I loved him until he was gone.  Then leaving the office without him, well, I just broke. 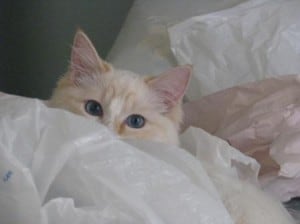 Everyday I would come home from work I would cry.  I knew in my hear I had to get another Ragdoll.  I went to a shelter and looked for one.  Then my sister surprised me and sent me a picture of a kitten and she asked if I liked him, and of course I said yes.  She said she was trying to figure out something to get me for my 50th birthday, she wanted to do something special so she and my brother in-law said they wanted to get me a Ragdoll.  The one she showed me didn't work out but I ended up getting Murphy.  Murphy is beautiful.  He is gentle, and 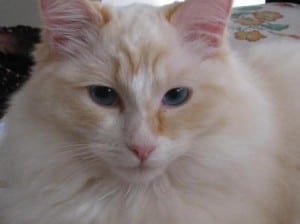 loving and loves his food.  He loves my dog and my other cat.  He is great with kids.  He hates when I kiss him and hug him.  But I think it is just a game with him because he always comes back for more.  He loves boxes and paper bags.  He will give me a head washing in the morning.  He is also good with animals he doesn't know.  I love him so much and he helped take the pain of the loss of my Buddy.  This is the story of how I fell in love with the Radgoll breed.  The first of Jan. I will be getting another Ragdoll kitten from Mary Ann to show.  So I will send in another story when he is old enough.  I think now as long as I can I will always have a Ragdoll or two in my life. 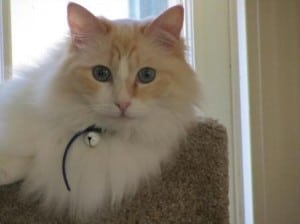 Murphy in his cat tree

Before I knew Buddy was sick, I got sick with female problems.   The day I came home from signing the papers on my house I was hemorrhaging and was going to pass out, I laid on the floor on the bathroom so I wouldn't hurt myself, and Buddy knew something was wrong.  He came and laid on my chest and just meowed, now he weighed over 15 lbs. so it was a little uncomfortable but I didn't mind.  I knew that was his way of taking care of me.  He would not leave me.  Now Murphy is not like Buddy, but no one will ever be like my Buddy.  And I am OK with that.  Buddy will for ever be in my heart.  Murphy is special in his own way and I love him with all my heart. 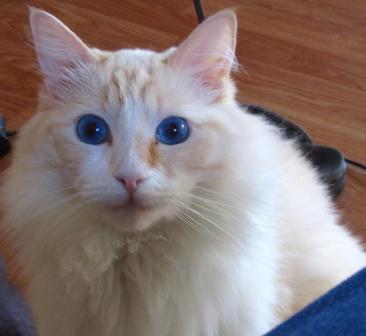 Murphy wanted me to feed him 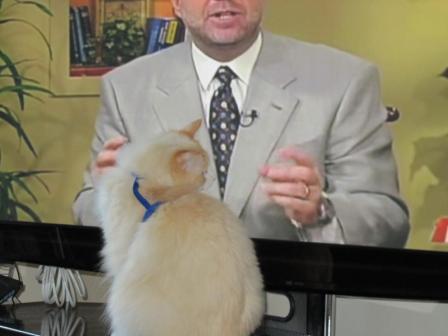 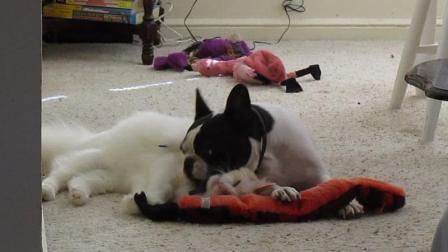