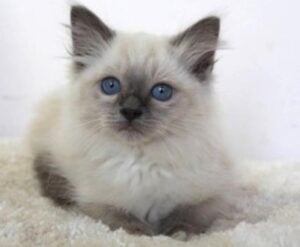 In the summer of 2013 my world turned upside-down. My husband had retired in 2011 from a life long career as an instrumental music teacher and I was set to retire from my 35 year career as an art teacher. Instead of looking forward to the future and our grand retirement plans…we were fighting for Al’s life. He was diagnosed with two types of cancer in January 2013 and as the summer came to a close in late August 2013… he passed away. 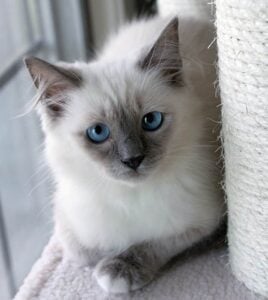 It was during the long waits in the doctor’s office, hospital rooms and the late nights at home, watching over Al, that I would pick up my laptop and attempt to escape and quiet the heartache and depression. As an artist and visual person, I love beautiful imagery and I ran across pictures of beautiful landscapes, serene scenery and cats, all kinds of cats…Maine Coons, Persians, and RagDolls (now mind you, I hadn’t had a cat in my home for over 25 years) I had never heard of the RagDoll breed and began researching their history, characteristics, etc. It was a diversion – nothing more.

I searched for breeders in my area and found Paws of the Heartland and I began a dialog with the breeder, Carol Stevens. Paws of the Heartland advertised as a small family hobby breeder of Ragdolls. The kittens were TICA registered with certified pedigrees. I was assured I was getting a purebred Ragdoll. The website stated they had champion lines as well as some old Midwest lines that add size and temperament to the genetic base in all their kittens. The breeder also mentioned that health, temperament and beauty was a priority in their breeder lines. All had tested negative for HCM, FELV/FIV. They never inbred their cats nor did they outsource lines for rare eye color or hair color. I was feeling very good with this particular breeder. 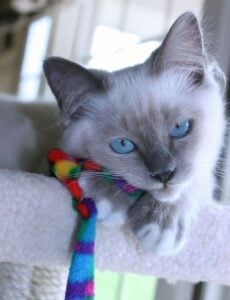 Weeks passed, and I became fond of 2 different kittens on the website and spent hours going back and forth and dreaming of bringing one home. My life was in turmoil, I was completely unravelled, yet In the middle of my devastating reality, I saved the image of one female kitten to my laptop and began wishing she could be mine. She was born on April 27, 2013, a blue point mitted beauty who beckoned me. I did not have the money or the inclination to make the purchase, that was until I knew that I was going to be alone the rest of my life. Suddenly, it didn’t matter anymore and I needed “SavinGracie” to save ME, so I put down a deposit. 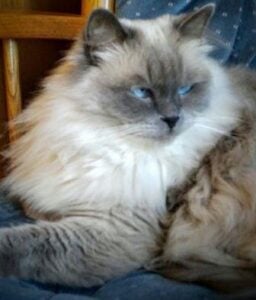 Gracie was ready for pickup, (but I was not), and I ask the breeder if she could hold her for me…she agreed. The week following Al’s funeral I ask my daughter to drive me to meet Carol, the breeder, and bring Gracie home at 17 weeks old. I was a little worried those first few nights if I had done the right thing as I was still deeply grieving. As it turns out (3.5 years later) it was, in fact, the best decision I could have made. She really was my saving grace!

I know the Ragdoll is considered to be a social breed, but Gracie arrived rather “skittish” – she was afraid of loud noises, and would hide if anyone came to the house. I thought she would outgrow this behavior, but she never really has. I will always question if the breeder was unable to socialize the kittens or if Gracie being homed rather late, at 4 months old, had some impact on her behavior. Either way…. my Ragdoll is a one woman cat and I am HER woman!

My daughter, Kayla, has 2 rescue cats of her own. In her desperate attempt to friend Miss Gracie on her visits back from Portland, Oregon, Gracie remains aloof. This little princess of a Ragdoll is simply not interested in meeting anyone closer than a brief tail pull or a “pass by” glance on her way to another room. She saves all of her head butts, her slow blinks, her cuddles and love for me, and me alone. I guess she knows I need it more than anyone.

When Gracie first arrived, there were four little chihuahuas living with me. I made sure she had her own room with a baby gate across the doorway. Their “meet and greets” took place gradually through the protection of a barrier that allowed them to sniff and get to know each other casually and at their leisure. The dogs accepted the new addition and eventually Gracie jumped the gate and came out amongst them. No one was upset or jealous, they took to her presence peacefully. As time went by all four dogs and Gracie ended up in my lap, we were a family. 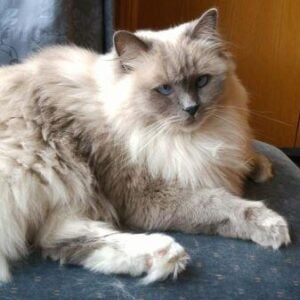 Life moves on and Gracie is now 3.5 years old. I lost 13 year old Jessie and Toby (who was 11). I believe they are both with my beloved husband in heaven, free of suffering and pain. So I am left here with two chihuahua’s and my Ragdoll girl. She is precious and loving to me and brings so much joy with her antics and “Princess” behavior. 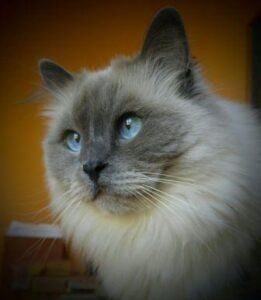 There are no guarantees in life for either.

Being retired is a luxury and I spend time painting and drawing in my studio. Gracie follows me there often sitting on my drawing table keeping watch. She likes to be wherever I am when she is not napping near a window or in her kitty bed in my closet. But for me the most endearing thing she does is simply look at me with her gorgeous blue eyes, slowly blinking, it just melts my heart and softens all the hard edges of life.

Love yourself, enjoy every minute of your life, and if you are lucky enough to have a Ragdoll in your home …. you are truly blessed. 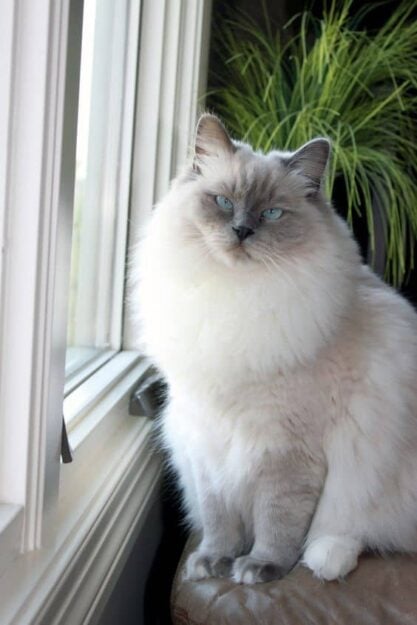 12 thoughts on “Gracie – Ragdoll of the Week”