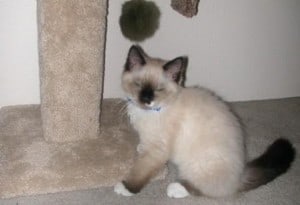 In 2005, after two months since my husband and I purchased our first cat, Caramel, a short hair tabby, we decided he needed a companion and someone to divert his silly ankle attacking skills.

My husband researched online the gentlest and friendliest cat breed.  And, lo and behold – Ragdolls came first on the list. We were both unfamiliar of such breed and very curious to have one. We called the pet store where we 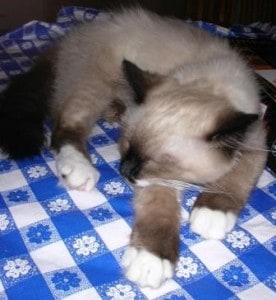 got Caramel, Scamp’s Pet Center in Portland, OR. It was such a coincidence that on the same day that we decided we wanted a Ragdoll, the store have Ragdoll/Siamese kittens. So we rushed to the store and see what they looked like. When we arrived, we saw kittens all piled up inside a glass enclosed area. There were two breeds, orange tabbies and Ragdoll/Siamese kittens. We asked for the Ragdoll/Siamese kittens. My husband picked up the female kitten and looked at her face. He mentioned that there was an expression on her face that he didn’t quite like. Then he picked up her brother. I remember my husband looked at the kitten straight in his eyes for a few seconds and decided – he’s the one. Sometimes I wish I had that experience, to look straight at an 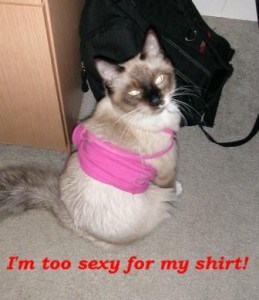 animal’s soul through their eyes then have that connection. I trusted my husband’s judgment though. And my! Peppermint was the best birthday gift I ever had.

Picking the name wasn’t tough for our second cat. We named Peppermint after a kitten’s name in Dorothy Grider’s famous children’s book, Peppermint. In the book, the mother cat’s name is Candy, who’s living in a candy store. When she gave birth, the owners named all her cats with candy names: Lollipop, Caramel, Peppermint, and Chocolate Drop. 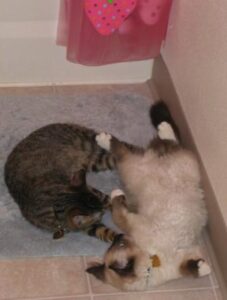 We’ve had Peppermint since he’s a kitten. We don’t know his exact date of birth and his birth place. According to his warranty papers, his approximate date of birth was April 15, 2005. But we celebrate his birthday on the first day we brought him home, July 19, 2005.

Since we got our cats, our lives have never been better. I cannot imagine a life without cats. Peppermint has weird habits and addiction though. He loves cotton buds, plastic bags, and my expensive sheep skin boots. He gets easily amused by the cheapest toys or things such as tiny crumpled papers, laser pointers, shoe boxes, long strings, and paper bags. His favorite sleeping spot is on our bed by my feet, which can be uncomfortable sometimes. The vacuum cleaner is his nemesis. He hates it when I bathe him and when I kiss his nose. His annoyingly cute habit is sitting right next on my side of bed 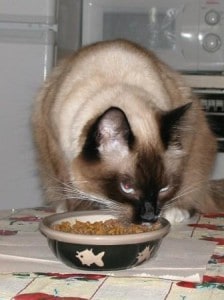 early in the morning and meowing his lungs out just because his food bowl is almost empty. He drinks more from his Cat It Fresh Drinking Fountain. In regards to food, we try to give him real slices of meat, which he seldom eats. He prefers his Purina One dry food, cat snacks, and any cat canned food. There’s one weird food that he’s addicted to: corn. Whenever we are preparing corn for our meal, he will always go to the counter, which does not happen when we cook meat.

I’ve never experienced such affection from an animal such as what Peppermint gives me every day. He always responds when I call him. He always shows great affection and love whenever I pet and cuddle him.

Someday I would like to have a pure bred Ragdoll. But for now, I’m savoring every moment I have with my Peppermint. 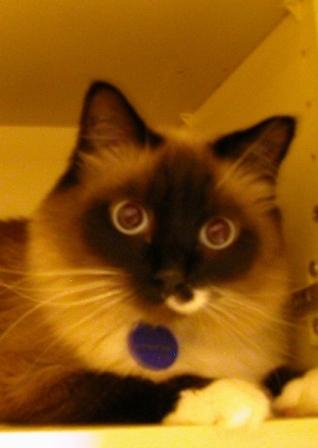 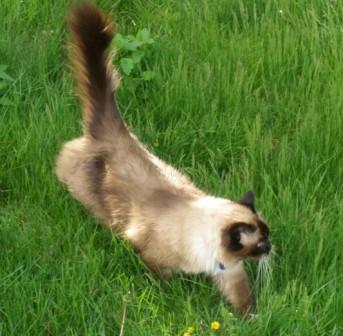 Peppermint In The Wild - of our yard 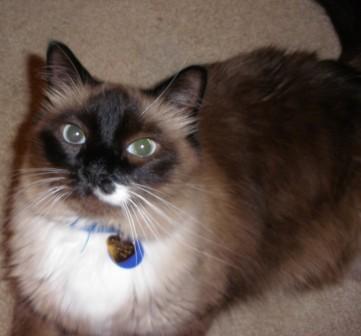