Hey there, my name is Krisztina, and let me tell you about my first kitten ever! Baron Shelby, a seal mink mitted ragdoll boy. Mr Shelby was born on the 7th of May 2019 in Belgium. He also has an Instagram account, where you can follow his adventures!My boyfriend and I live in Gent, Belgium and have been thinking about adopting a cat from the moment we moved in together since we are both huge fans of cats. Fast forward 1,5 years and we felt like our living situation finally allowed us to get a kitten. We considered adoption from a shelter and other cat breeds as well, but we were completely smitten by Ragdoll cats after doing some research online (although we already had an idea about the breed before). The YouTube videos of Floppycats were a big help with getting to know the breed and making our decision, and we immediately contacted a number of breeders in our area. We were gonna be happy with any kitten but we were aiming for a boy of seal coloration, as we found them to be the prettiest. 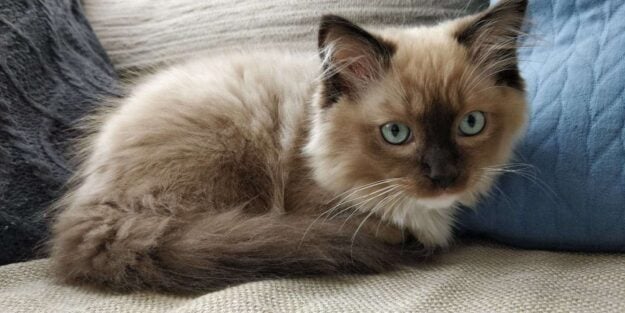 Fortunately only two months later we were invited to meet our future kitten, Mr Shelby! We got him from a smaller and slightly less experienced cattery, and we were a little scared at first if everything would go well, but from the moment we first saw him we knew he was meant for us. He was only 8 weeks old and had two brothers from the same litter, but we found him to be the most active, most chubby and generally the cutest little ball of fluff. His dad is a traditional seal point mitted Ragdoll male and his mom is a seal tabby Ragdoll carrying the mink gene. He turned out to have the prettiest seal mink coloration (with extra cute mittens) which we find to be very unique and special. His namesake is Thomas Shelby, and/or the Shelby family from the currently very popular TV series, The Peaky Blinders. The name Baron we found to have a nice ring to it, but we only added it because his litter had the designated letter "B". 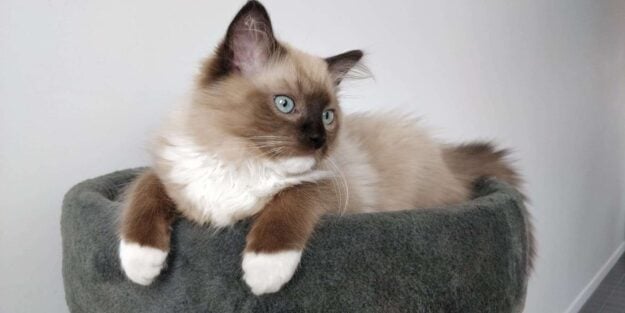 The next 5 weeks were spent with waiting impatiently and preparing with acquiring every possible item we could for Mr Shelby’s arrival. We got him a cat tower, cat beds, scratching posts, a cute blue cat carrier, a load of toys (some of them gifts from friends), and researched and ordered the best quality food we could afford. We even did research to find the most ideal litter solution and got a Black Hole litter mat and a LitterLocker! Here I also have to mention that the availability of foods and different cat products in Europe is very different from the US, while most of the articles and sites we did research on were US based, so that got a little tricky. 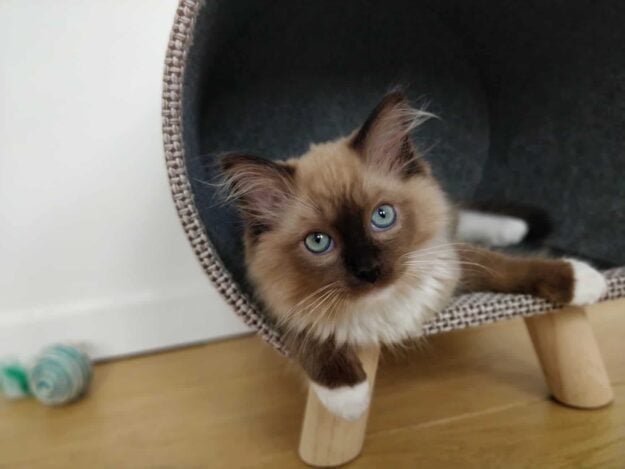 Posing in his cat bed

We just arrived home from our holiday when Mr. Shelby was due to be taken home by us (at 13 weeks as defined by Belgian law). By this time he had received all his vaccinations, had been dewormed twice, has been castrated and chipped. During the trip home he was already showing so much affection towards me, I had to keep my hand inside his carrier for the entire 1.5 hour trip, and then he would not be crying. When he arrived home he was not shy at all (he is anyway very far from shy), he jumped right out of the carrier and started exploring. 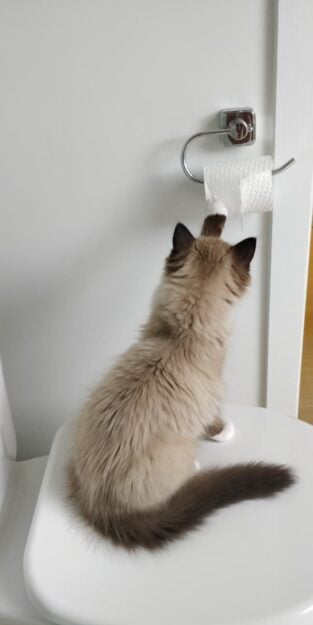 He had a healthy appetite from day one, found the litter box immediately, and generally behaved like a little angel for the first two days. Well, it turns out that was his adjustment period, as ever since then he has become more comfortable and likes to be a little rascal at least a few times a day. We had a bit of a hard time with the differences in our sleeping patterns, as he often is in play-mode when we are going to bed. This resulted in him having to spend the night locked out of the bedroom a few times, but he is slowly adjusting to our schedule. 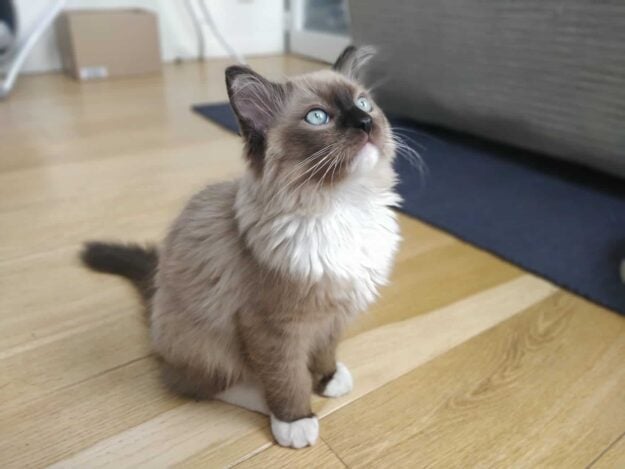 Mr Shelby has a very Ragdoll-like personality, we would not even have dreamt of him being so ”textbook” with his behavior. He follows us around in the apartment, can not be left alone for 2 minutes, he flops everywhere and anywhere and he likes to be held, sometimes even asking to climb in our laps! 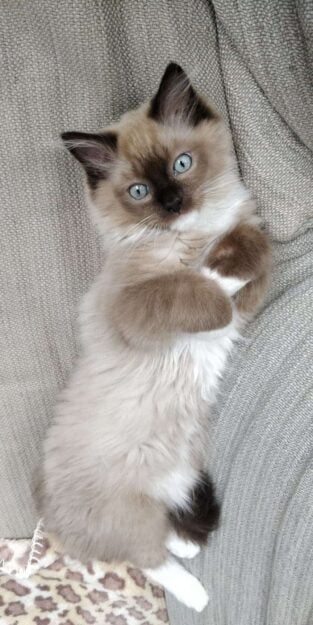 His favorite toys have proven to be balls, while he doesn’t really like cuddly things like plushies or catnip filled things. Still his all time favorite so far is: a blue plastic bottlecap. Who cares about all those expensive toys, am I right? Cat fishing-poles have also proven to be quite successful with tiring him out since he requires at least 1-2 hours of active playtime every day. When it comes to cat beds, so far he did not like any of them, somehow it seems like he dislikes pillows and blankets :/ As a consequence he usually sleeps on hard surfaces or harder materials like rugs, chairs, tiles or parquetry. 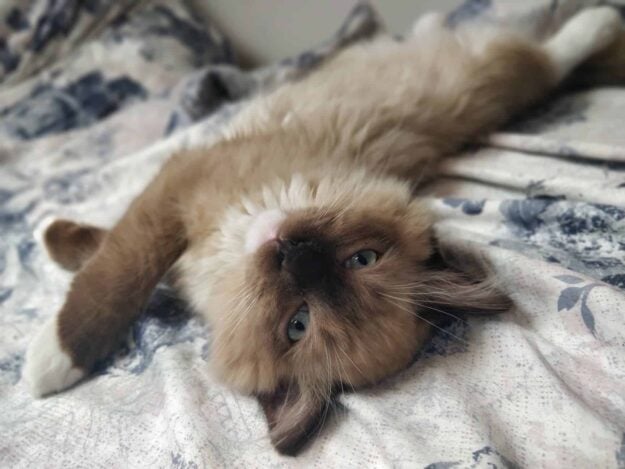 We are a little sad that we couldn’t adopt a little brother or sister for him just yet, but fortunately I am still a student for at least another year, making me able to spend almost all of the day with him, which he clearly requires. Who knows, maybe by the time I finish we will adopt a 2nd kitten for him to play with? 😊 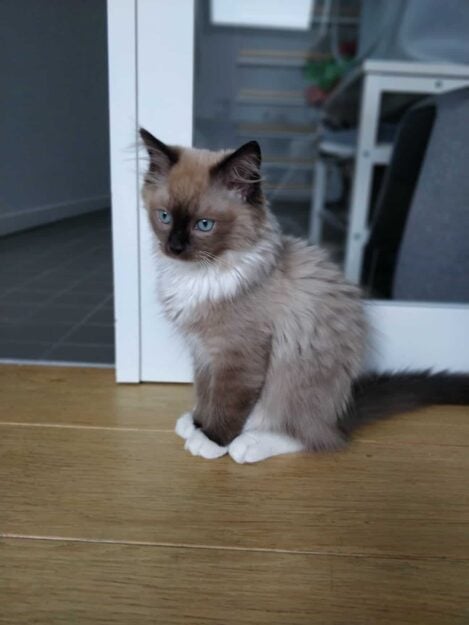