After my first cat, Ariel, died in 2004, I went a little kitty crazy.  I adopted Minny and Sophie in 2005, and Manny in 2006.  Manny is a seal point ball of fluff with no pedigree, who is probably (based on appearance and temperament) a Ragdoll.

I met Manny at Moline Animal Aid, in Moline, IL, in January of 2006.  I didn't intend to adopt a cat that day.  I had gone to volunteer some time giving a little love to the shelter cats.  When I arrived, the girl at the front told me that if I was looking for a cat, they had a lot of great young ones, but I should avoid the old Siamese one in the front room.  She then said she didn’t know who would want it, that it was old and not active.  Of course, that was the cat I visited first. 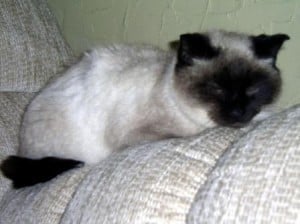 Manny the first week I had him.

Nana, the pink collar said, indicating this was a female cat.  I picked her up and she melted into my arms.  As I held her, I examined her.  Her right eye was cloudy and sightless.  Her gums were swollen, and many teeth were broken off.  She felt like she weighed about 5 pounds.  Her tail was a mangled mess, with most of the bones fused together as if they had been crushed.  About 5 inches from the end, there was a large knot, and the tail hooked sideways.  The last two inches of her tail were furless and raw, except for a tuft of hair at the end.  And, wait a minute, she was actually a he!

After an hour or so, I left the shelter and headed home.  I didn't need another cat.  I didn't make it - halfway home, I turned around.  Animal Aid is a no-kill shelter, and they would have kept Nana as long as he lived, but they couldn’t afford the kind of veterinary care this cat needed.  I would adopt him.  I asked them to test him for feline leukemia and feline AIDS, as I had 3 other cats at home.  I carried him out front while they drew up the papers.  He urinated on me while I held him, and I could see the fear in the girl’s eyes as she worried that I would back out of the adoption.  They normally charge an adoption fee, but she told me I should just take him, no fee.  I decided to call him Manny, so no one would mistake him for a girl again. 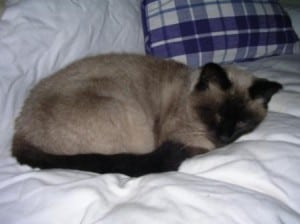 Over the next year, Manny had a lot of veterinary visits.  His broken teeth were removed and reconstructive surgery was done to remove the tissue that had overgrown in his mouth due to the constant inflammation.  His fur fell out in chunks but regrew shiner and brighter.  His damaged eye was removed and sewn shut.  We x-rayed his kidneys, did a bunch of tests, and ended up trying a number of different diets to try to stop his urinary problems (he kept going outside the box).  He gained weight and became more active.  All-in-all he was doing much better.

Then his missing eye starting swelling up.  The vet drained it (a new vet now, we had moved).  It swelled again, and the vet recommended surgery.  He thought that maybe some of the old eye tissue had been missed in the initial surgery, and he wanted to go in and clean it up.  It turned out to be much more disturbing.  When we went to pick Manny up after the surgery, the vet gave us a little tube with a piece of metal in it.  It was an air-gun pellet that had been lodged in Manny’s eye socket.  Someone had shot him in the head. 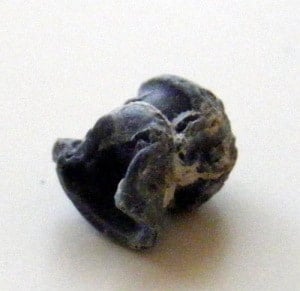 The air gun pellet that was lodged in Manny's eye socket

I was horrified that someone could have done this to an innocent animal.  Together with the crushed tail and broken teeth, he must have had a terrifying existence before someone dropped him off at Animal Aid.  And yet, he is a sweet and loving kitty who adores his human mommy and craves human contact. 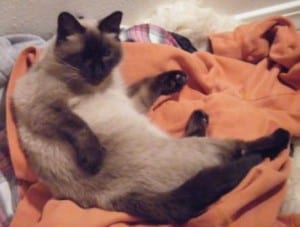 Manny on his mommy's clothes

On the positive side, Manny stopped going outside the box when the pellet was removed.  I think he was trying to tell me that something was still wrong, but I couldn't understand where it hurt.  Manny's favorite activities are chasing his sisters, following his mommy around like a puppy, playing with with a bumblebee toy that beeps when he bats it, kneading the sheepskin rug, sleeping on his mommy's clothes, and lying next to his stuffed "girlfriend".  Even though he has no teeth, he eats dried food with gusto.  His favorite is, ironically, Royal Canin dental diet. 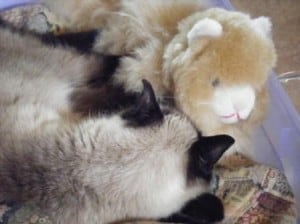 Manny with his girlfriend