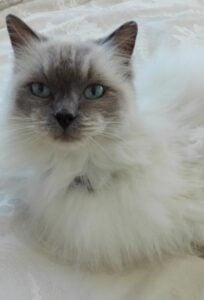 Hi, my name's Phoenix and I am a Blue Colourpoint and I was born on the 16th of May, 2010 to Milady. She is a Seal point but I got my fathers traits. I was one of four in the litter and we were all Blues. My father is Kenepurrfect Kansas Kid. 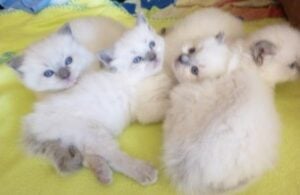 One of my sisters and me were sold to a lady in Auckland, The Jones, hence my sir name, but after a month they decided to move to Australia, so they asked mummy if she would have me back as they couldn’t afford to take two kittens with them. Mummy was so glad to have me back as she had recently lost her first Ragdoll, Alfie to cancer, so back to the South Island of New Zealand I went.

I grew up with a half sister, Purdie, she came from my mothers first litter and is a seal point like our mother. I try to stamp my authority over her and chase her, it’s just a boy thing, sometimes she stands up to me, and sometimes mummy yells at me not to chase her, but it’s fun. Some people can’t tell the difference between my mum and Purdie, but Purdie has white tips on her back feet. She was born just before midnight on the 31st Dec 2006, so she is ten this year. 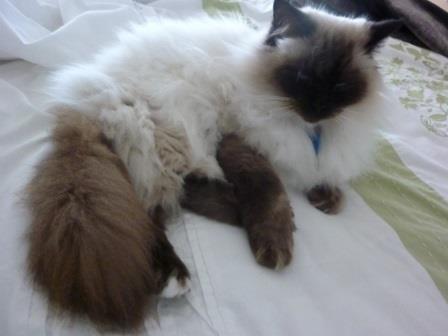 We all keep in good health and in 2011 mummy and daddy decided to move to Australia, so we all hopped on a plane and flew over. I can remember it was a long day as we had to leave home in the early hours of the morning to drive to Christchurch, then we had to have a vet check and get put in our own cages, then we hung out in customs with a few other cats and dogs heading over to Australia before boarding. Once we landed in Brisbane we had to be checked over again before getting collected by mummy and daddy. Then we had a 1 and a half hour drive to our new home on the Sunshine Coast. We arrived about eight in the evening. It didn’t take us long to settle in and we 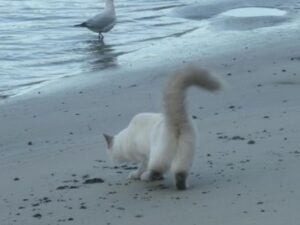 loved it as we were right on the beach. We liked walking down to the waters edge and chasing the birds and one time daddy caught a fish, that I had a good sniff around. I don’t eat fish though, I became an almost vegetarian sometime ago, I say almost, as I only eat prawns and dried food, so mummy feeds us cooked prawns at breakfast and dinner time and we have biscuits we can eat when ever. She recently bought the new improved hairball Purina One, that we have been having since we arrived in Australia, and man did they stink when she opened them. We didn’t like them at all and wouldn’t eat them, so she rang the hotline and was told that after extensive research the company had come up with this new formula. She got a refund but now we have to try different ones to find one we like. Maybe the laboratories should have asked a cat if they liked them before marketing them...

Mummy says she misses not breeding Ragdolls and really misses not having kittens around. The season before I was born she had three girls all in kitten and they were born just a few weeks apart.

Purdie had five, Champers had four and my mum had five, so in this photo you can see all of them together... I don’t know how mummy could tell them apart, but apparently she could. She gave them all names or the new forever parents named them as they selected the one they wanted.

Ragdoll kittens are so cute. Mummy bred 65 kittens over the five years she had the cattery and still keeps in touch with a lot of the families who bought her kittens. Just today a photo of Porsha was posted on Facebook, she lives in Wanaka, NZ with her brother Stiggy. We like company, so it’s good to have mummy and daddy at home most of them time and other raggies around too. 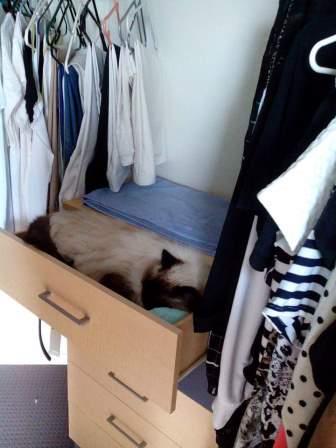 milady in the drawer

Most of the time I sleep on the bed between mum and dad, Milady sleeps right next to mums pillow and Purdie likes to sleep on the bed on the deck if it’s not cold or raining otherwise she sleeps under the bed. If Milady gets up in the morning and mum is still in bed then Purdie will sneak into her spot. Sometimes it’s like musical cats in our house. Even though it’s supposed to be our winter now, on Saturday it was 28deg, so I like to curl up in the side dressing table cubby hole, when it’s really hot in summer we find cooler spots downstairs. Milady likes to sleep in my mums top drawer, as soon as she hears mum getting dressed she waits till she opens the top drawer and jumps in, she’ll be there all day if mum lets her. 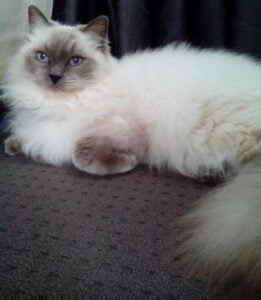 Mum says she must have over 10,000 photos of cats and that it was a really hard job just picking out 8 to send to Jennifer as they are all so cute, but I’m the cutest and I have a lot to say for myself. I talk all the time and they understand exactly what I am saying. If I really want to get their attention then I run full blast up the hallway, jump on the bed then take off again. I have a game with mum after dinner, I have several toy mice I like to chase and play with.

So there you have it, what a wonderful life we have and what great pets we make, I know from the look on my mums face how much she loves us all and why wouldn’t you. 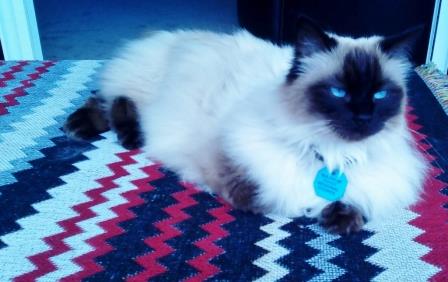